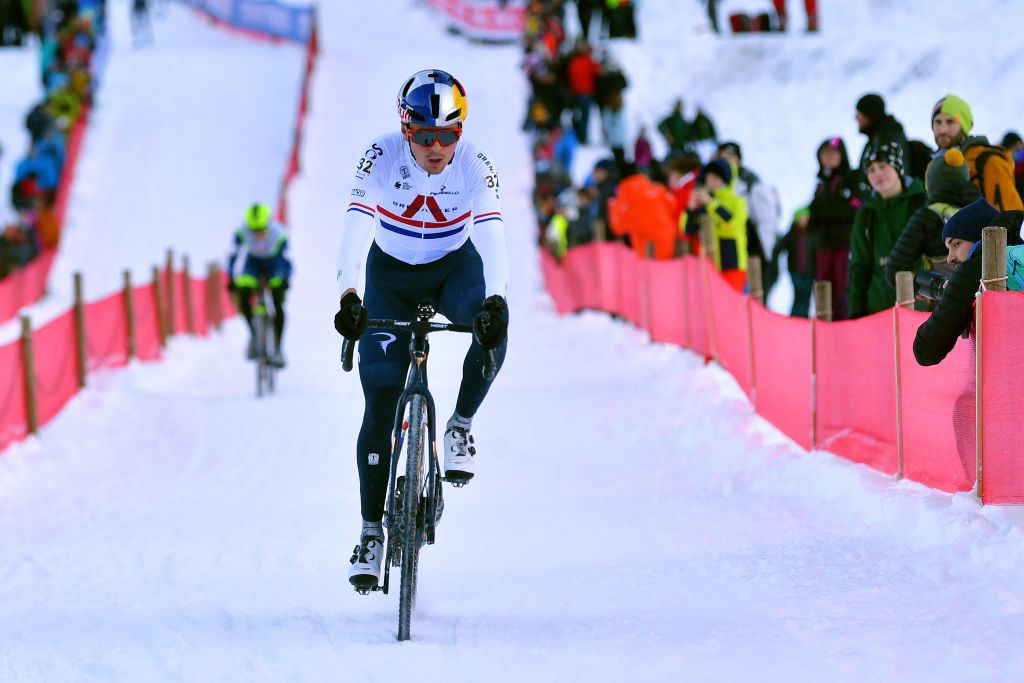 Tom Pidcock completed his second cyclo-cross race of the season in the snow-bound World Cup round at Val di Sole on Sunday, improving to third place having finished seventh at the Boom Superprestige last weekend.

The Briton has only just made his racing return following a long layoff from competition after the Road World Championships back in September.

He finished 1:28 down on race winner Wout van Aert in Italy but still managed to score his first podium finish of the season, sandwiched between Pauwels Sauzen-Bingoal riders Michael Vanthourenhout and Eli Iserbyt.

Pidcock started in mid-pack before working his way up through the field during the race. He said afterwards that the race got harder as it went on, noting that he and Iserbyt – who he was fighting for that last podium spot – made mistakes in the closing laps of the hour-long race.

“I think me and Eli Iserbyt made a lot of mistakes in the final,” Pidcock said after the race. “As it was freezing and the ruts were freezing, it was really tricky, really technical. I just tried to stay as concentrated as possible.”

He and Iserbyt, the World Cup leader, were in a close battle for much of the race, with Van Aert and Vanthourenhout up ahead, but Pidcock prevailed in the closing laps, getting ahead with two to go and sealing his podium spot after the Belgian made several small mistakes on the last lap.

Pidcock said that the snowy setting – which was designed to show off the sport in the hopes of gaining a place at the Winter Olympics – worked well, even if it isn’t his favoured surface for racing on.

“It worked pretty well,” he said. “The snow was very different to what we are all used to. It’s a good start towards getting cyclo-cross in the Winter Olympics.

“But I’m looking forward to the mud because that’s more my thing and I prefer it to the snow and the sand.”

Pidcock added that he hopes to continue his improvement next weekend, where he’ll compete at the next two World Cup rounds in Rucphen in the Netherlands on Saturday, and in Namur in Belgium on Sunday.

“I hope I’ll be good next weekend,” he said. “Last week I was seventh and now I was third. I think I’m finding my legs pretty fast so I think next week I should be at the front. I’m not saying I’ll be in top shape, but it will be a good race.”

Following the next two World Cup rounds, Pidcock will take in three more races to end 2021, including a first showdown between him, Van Aert and Mathieu van der Poel at the World Cup Dendermonde on Boxing Day.

Mid-January will see him take a break to head to Ineos Grenadiers’ training camp in Spain before switching back to cyclo-cross for the Worlds in Fayeteville, USA.