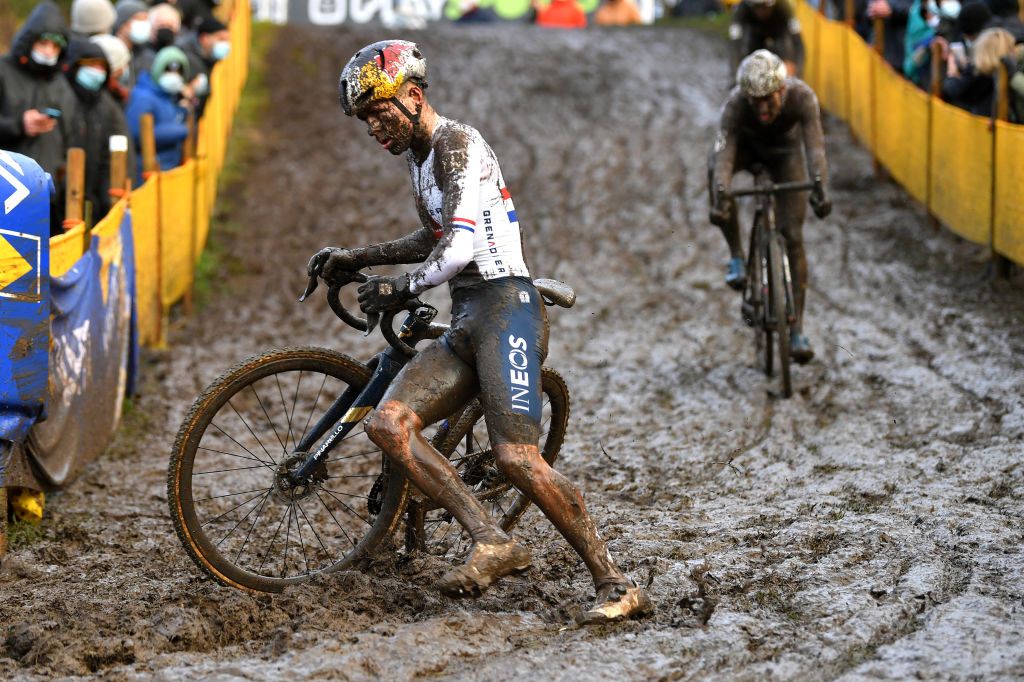 Tom Pidcock’s seventh place at Superprestige Boom might have looked a little more impressive were it not for the exploits of Wout van Aert, but the Ineos Grenadiers rider was still pleased with his cyclo-cross season debut.

Pidcock, like Van Aert, was making a highly-anticipated return to competition after a successful campaign on the road but had played down expectations given his lengthy winter break.

While Van Aert made a mockery of his pre-race comments with an utterly dominant display, Pidcock fell more in line with expectations, finishing more than two minutes down on the three-time world champion but up there in the thick of a field that have been racing consistently since October.

“Pretty good actually,” was Pidcock’s assessment in a video from his Ineos Grenadiers team.

“I was far away from winning, but I was good. Considering what I’ve done, yeah, I’m pleased. It was good.”

Pidcock didn’t make the quickest start and had to close a gap to a leading group of seven on the opening lap, but just as he got himself on terms, Van Aert launched his offensive, storming clear up a steep muddy incline. He finished the lap in sixth place, before consolidating his position in the ever-more-distant chase on lap three.

By lap four, Pidcock decided he needed to force the issue, but his aggressive riding led to mistakes. Twice in quick succession he wobbled and crashed going downhill, his white British champion’s jersey receiving two coats of the sloppy Boom mud. While the victory was taken out of everyone’s hands by Van Aert, the crashes effectively ended Pidcock’s podium hopes, and he rode on to secure a finish in the top 10.

“I had too many crashes,” Pidcock said. “I’m a bit bruised now, and I’m still struggling to see.

“It was my first race, and yeah, not a perfect one to start with, in those conditions. There are always things you can get, like putting anti-fog on my lenses, but they were still fogging up so I had had to take my glasses off and then I couldn’t see. All this little stuff. You feel like a numpty every time you do your first race of the year, but it’s alright.”

Pidcock will now head to Mallorca to link up with his Ineos Grenadiers teammates at a first pre-season training camp, but he’ll be back in cyclo-cross action next weekend. He plans to target the World Championships in the USA at the end of January and, in the absence of the Antwerp round of the World Cup, next week will see a key point in Pidcock’s progression as he lines up at the Val di Sole World Cup, which is set to be raced on snow.

“Now we go to Mallorca for a bit of the training camp – I can’t do all of it – then into the snow next week,” Pidcock said.

After Val di Sole, Pidcock will race three further World Cups in Rucphen, Namur, and Dendermonde, before a couple of Superprestige and X2O rounds between Christmas and New Year, and then the Hulst World Cup on January 2. After that, he will take a longer break to take part in Ineos’ January training camp on the road, before returning to ‘cross in Belgium the weekend before the Worlds in Fayetteville, USA.