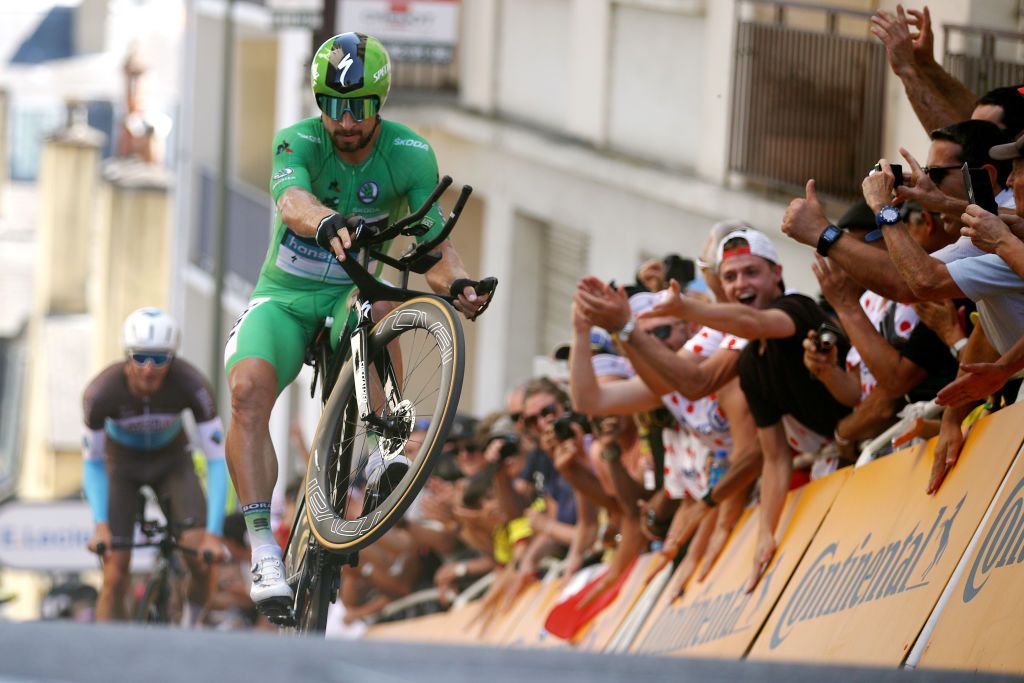 The arrival of a strong personality like Peter Sagan along with his entourage could easily transform an entire organisation. But TotalEnergies sports director Benoît Génauzeau tells RTBF Sport that the team intends to remain true to its identity while giving Sagan the freedom to race according to his instincts and continue to be a showman.

“We are at the beginning of the start of our collaboration,” Génauzeau said. “A few weeks ago, we met Peter in person for the first time for a visit to the team headquarters. We wanted him to understand where he was going to set foot because our identity is strong and we claim it. We wanted Peter to be able to discover the soul of our team thanks to this visit.”

The team is preparing for its first camp, starting on Tuesday in Calpe, Spain and lasting through December 17, where Génauzeau is hoping to integrate Sagan and his crew: Maciej Bodnar, Daniel Oss, Juraj Sagan, sports director Ján Valach, a mechanic, a trainer and his own press officer, into the team.

“He is someone who needs a close and trusting environment,” Génauzeau says. “That’s why we chose to welcome him with some of his teammates and some members of his staff so that he finds himself in a known and trusted environment. Now, the challenge for us will also be to succeed in integrating him into the team … we want to continue to cultivate the soul of the team, with our way of doing things and our instinct. And we want to be in tune with Peter to achieve great things together.”

Sagan is well known for his victories in the Classics like Paris-Roubaix, the Tour of Flanders, and Gent-Wevelgem, his seven Tour de France green jersey wins, his dozen Tour stage wins, and his victory in the Giro d’Italia points classification this year.

He’s also known as being a showman, light-hearted (‘why so serious’) and effusive, but can also be cantankerous with the media and aggressive on the bike. He’s been kicked off the Tour de France for taking down Mark Cavendish and punished for pinching a podium hostess, all while being celebrated for his powerful sprint and his viral video stunts.

Génauzeau welcomes Sagan’s personality and the star power it brings. “Of course we want to keep this aspect of the rider in our team. We’ve never had a rider of Peter’s calibre, but we have had an iconic guy like Thomas Voeckler who still gave off something and didn’t leave the general public indifferent.

“We like that and we welcome this asperity with a lot of desire. It’s all based on a balance between show and performance. The two are not opposed, far from it. Moreover, Peter Sagan has demonstrated this throughout his career,” Génauzeau says.

The team is already experiencing the power of Sagan even before his official start date with the team. “There is a lot of interest, demands and questions around his arrival… I see his arrival as a help for the development of our team project. We are counting on his arrival to do great things together. We want to keep our identity and by coming to us, I think Peter wants to find his instinct and a certain freedom.”

He denies that Sagan is on a downward trajectory. Although Sagan’s number of victories per season has declined, he still is more successful each year than most riders.

“If you look at his 2021 season, he’s more than accomplished with wins in the WorldTour, the Giro, the Giro points classification. He started the year with Covid, he crashed quite seriously at the Tour de France and was forced to abandon. But it was still a great season.

“Now, the trick is perhaps to find certain motivations. There can be a kind of weariness when you stay with a team for many years. Our challenge will be to find and bring something new to the team, small changes to help him achieve great things again.”