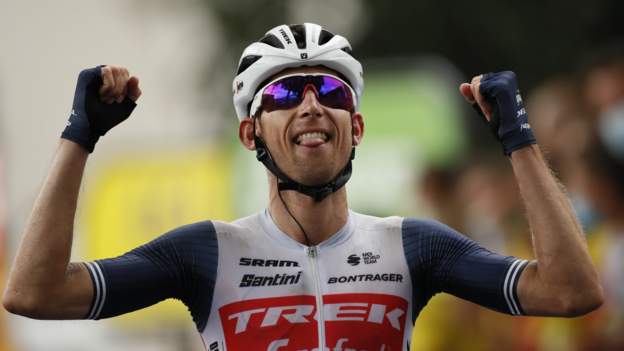 Bauke Mollema claimed a fine solo victory on stage 14 of the Tour de France as Guillaume Martin moved up to second overall behind Tadej Pogacar.

Dutchman Mollema broke clear of the rest of the breakaway with 42km of the 183.7km to Quillan left and won his second Tour stage by over a minute.

French rider Martin came home in a chasing group to move up seven places in the general classification.

Pogacar finished in a reduced peloton and leads by just over four minutes.

Mark Cavendish completed the stage well within the time limit alongside four of his Deceuninck-Quick-Step team-mates, over 25 minutes behind Mollema.

The Dutchman is over 30 minutes adrift in the general classification race this year but took advantage of indecision among his breakaway colleagues as he descended from the penultimate climb of the day on the Cote de Galinagues.

Once he had ridden clear of his 13 former companions – with an attack that bore similarities to his triumph on stage 15 into Le Puy-en-Velay in 2017 – he was able to pace himself perfectly to the finish.

“I was feeling good so I thought, ‘Let’s go from far out’. I had the confidence I could ride alone and keep going for a long time.”

Sunday’s 191.3km route from Ceret to Andorre-La-Vieille sees the race leave France for the only time in this edition as it reaches the highest point on this year’s route, at over 2,400m on the Port d’Envalira.