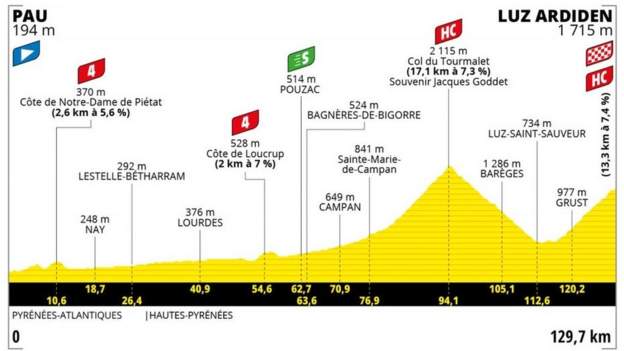 The 108th edition of the Tour de France starts in Brest on Saturday and finishes in Paris on Sunday, 18 July.

The riders will tackle two individual time trials and six mountain stages on trips to the Alps and Pyrenees as they race 3,414km around France.

BBC Sport looks at every stage of the gruelling three-week race, analysing where it could be won and lost and which riders are likely to flourish.

This page will be updated throughout the Tour with the winner and a brief report after each stage.

The Tour begins with an undulating stage containing six climbs, while the potential for crosswinds in the Monts d’Arree means the leading general classification teams will need to remain vigilant.

Many of the sprinters are likely to have been distanced by the time this stage reaches its conclusion, with a steep and short ascent up the Cote de la Fosse aux Loups, favouring the puncheurs.

It would not be a surprise if French world champion Julian Alaphilippe, gives his home crowd something to cheer early on in the race.

Stage two sees another cluster of lower-category climbs on the agenda with a testing double ascent of the famed Mur-de-Bretagne to finish. In theory this stage should suit many of the riders who challenged for the yellow jersey on day one.

A relatively flat parcours should bring the sprinters in to play for the first time in the Tour. It could give us an early indication of Mark Cavendish’s form, with the winner of 30 stages looking to make further inroads into Eddy Merckx’s record tally of 34.

The run to the line is wide and almost a mile long, so any of half a dozen sprint specialists, plus the likes of Wout van Aert and Jasper Stuyven, will have a realistic opportunity of victory.

With no categorised climbs and barring the unlikely success of a breakaway, the flat terrain should see another stage decided in a bunch sprint finish.

The longest individual time trial in the opening week of the Tour since 2008 should bring many of the general classification hopefuls to the fore.

Reigning champion Tadej Pogacar, 2020 runner-up Primoz Roglic, and the 2018 winner Geraint Thomas will all be looking to put down a marker, while the likes of Stefan Kung and Stefan Bissegger will also fancy their chances on a rolling and technical course.

After the stage five time trial the attention switches back to the fast finishers on a flat stage that looks ideally suited for a bunch sprint.

The longest stage for 21 years sees the peloton climb more than 3,000m, mainly on five demanding climbs in the concluding 100km.

The Signal d’Uchon should scatter the peloton as the finish line approaches with a 5.7km slope ramping up to an 18% gradient on its steepest section. The breakaway specialists may view this as an opportunity to steal some of the limelight away from the the GC battle.

After a week of relatively flat racing the Tour arrives in the Alps.

The descent to the finish at Le Grand Bornard comes after three back-to-back category one climbs with Cote de Mont-Saxonnex, Col de Romme and the Col de la Colombiere all on the menu.

Stage nine see the Tour return to Tignes, which was due to provide the finale to stage 19 two years ago before landslides left the road impassable.

With the rest day approaching, those hunting stage wins could tackle this aggressively as the GC contenders battle it out on the long 21.6km rise to the finish.

While it is not the steepest climb in the race several sharp sections, including beneath the dam at Les Brevieres, could open up gaps between the main overall contenders.

The race moves on from its brief stay in the Alps to a transitional stage.

The 190.7km route sees the peloton coast along the predominantly flat lower reaches of the Rhone Valley but the potential for crosswinds and echelons late in the stage, could make it anything but an easy day in the saddle.

This highly-anticipated stage sees the race return to the iconic Mont Ventoux for first time since 2016. While there is no summit finish, there is a first double ascent of the Giant of Provence, the scene of so many classic Tour de France battles over the years.

Colombia’s Miguel Angel Lopez, who recently posted the fastest time for the climb up Ventoux since 2004, could well be in the mix with all the main yellow jersey contenders at the finish.

A bunch sprint should be the order of the day in Nimes as the overall race leaders riders get their legs back with the Pyrenees on the horizon.

If ever a stage was made for the breakaway history would suggest that this is it.

Carcasonne is yet to see a bunch sprint to the line and the rolling terrain should suit smaller groups of attackers.

Stage 14 takes the Tour to the foothills of the Pyrenees, with the narrow winding roads and constant undulations favouring the breakaway.

There are five categorised climbs but none that will place great demands on the riders vying for the maillot jaune. Instead, expect the likes of Marc Hirschi, Alexey Lutsenko and Magnus Cort to be in the hunt for a stage win.

The race leaves France for the only time in 2021 passing into Andorra as it reaches the highest point on this year’s route, at over 2,400m on the Port d’Envalira.

This could arguably be one of the toughest days in the saddle, with a 19-kilometre uphill start followed by three punishing climbs before an anticipated battle on the Col de Beixalis, which could blow the race for the yellow jersey wide open.

This could be a day that sees very little movement at the top of the general classification, with two pivotal days to follow and finishes on the Col du Portet and Luz Ardiden looming large.

The descent from the Col de Portet d’Aspet sees the peloton pass a monument in memory of Fabio Casartelli, the former Olympic champion, who crashed and died on the 1995 Tour de France. The parcours then flattens off until a sharp 500m uphill finish.

Riders to watch: This will be updated during the Tour

Bastille Day is always a special occasion at the Tour de France and this year will be no exception.

The race organisers have served up a replica (albeit over a much longer distance) of stage 17 at the 2018 Tour, which saw Colombia’s Nairo Quintana superbly solo to victory and Geraint Thomas extend his overall race lead.

Climbs up the Col de Peyresourde and Col de Val Louron-Azet serve as an appetiser for the imposing Col du Portet, where a series of switchbacks and a gradient of more than 10% in the final kilometre, could see fireworks in the race for the yellow jersey.

The final mountain stage of this year’s race is arguably the most punishing day of the lot.

Two small climbs inside the opening 60km are followed by the iconic Col du Tourmalet and there is little respite for the peloton before another classic climb up to Luz Ardiden.

Greg LeMond’s brilliant ride to the ski-station finish set him up for the last of his three Tour de France successes in 1990, while Miguel Indurain’s victory here was the precursor to five consecutive Tour wins.

With the race for the yellow jersey put on hold, the profile of this stage suits the sprinters as Libourne hosts a finish for the first time since 1992.

The other likelihood is that a number of riders will form a breakaway, hoping that fatigue and any caution prior to the final time trial, gives them enough leeway to make it decisive.

This time trial could deliver a sensational conclusion to the race for the yellow jersey for the second consecutive year.

Shorter and flatter than the route to La Planche des Belles Filles, where Tadej Pogacar dramatically took the yellow jersey away from Primoz Roglic in 2020, this course is unlikely to cater for big time gaps between the overall race contenders.

But if it is close, it could be an intriguing and tense afternoon.

The Tour concludes with its traditional processional final stage. Expect to see the overall winner and his team-mates sipping champagne and a leisurely ride towards Paris before a helter-skelter sprint on the Champs-Elysees cobbles.