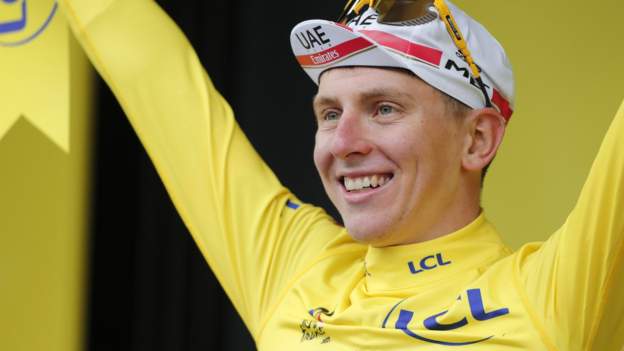 Pogacar 22, animated the race, riding clear of his rivals on the penultimate climb of the Tour’s first day in the Alps which ended in Le Grand-Bornand.

It saw him land a major blow in the general classification with fellow pre-race favourites Geraint Thomas and Primoz Roglic both distanced early on.

Ion Izagirre was second, 44 seconds behind Teuns, with Michael Woods three seconds further back in third.

Pogacar, who eased off late on, content with the damage he had inflicted on his rivals for the overall victory, finished a couple of seconds after Woods.

The Slovenian now leads Belgium’s Wout van Aert, who is not a climbing specialist and expected to lose more time in the mountains, by one minute and 48 seconds in the general classification race.

“The start was super hard, there were riders everywhere, but I felt good in this weather,” said the UAE-Team Emirates rider, who attacked out of a reduced peloton with just over 30km remaining in an extraordinary demonstration of his power, punching his chest in celebration as he crossed the finish line.

“I decided before the last three climbs let’s try to break the race and we did it.

“I suspected after yesterday (the other teams) did a lot of work, they attacked us, they thought they could break us as a team.

“I thought they would show more but in the end I guess they were affected from yesterday and the cold and the rain today. Now we are in yellow and we are prepared to defend because we showed we are a super strong team.”

The day started perfectly for the Slovenian, who watched as both 2018 champion Thomas and last year’s runner-up Roglic fell off the pace.

Thomas, who had a dislocated shoulder popped back in after crashing heavily on stage three, was distanced on the opening uncategorised 5km climb of a bruising 151km race that included three category one ascents.

And Roglic soon followed, with both ending up in a group alongside sprinter Mark Cavendish and four-time champion Chris Frome, in the final group to finish, 35 minutes after Teuns.

Thomas is now more than 36 minutes behind Pogacar with Roglic almost 40 minutes adrift.

Simon Yates is the highest-placed British rider in 17th, 12 minutes 13 seconds behind Pogacar.

While the Tour may only be just over a week old it is already difficult to see who might challenge Pogacar over the remaining 13 stages.

On Sunday, the race takes another mountainous route as it travels 144.9km from Cluses to Tignes.