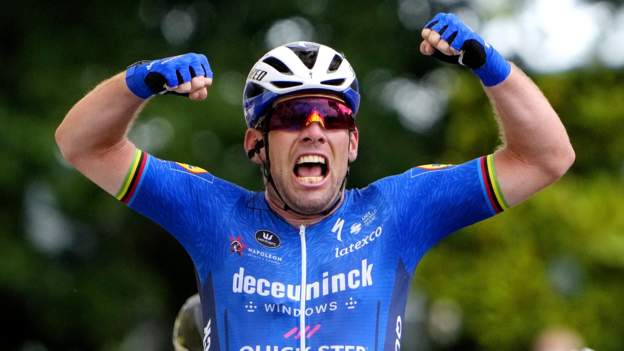 Britain’s Mark Cavendish won his first stage at the Tour de France for five years in a thrilling sprint finish on stage four in Fougeres.

Cavendish, 36, rolled back the years as he finished ahead of Nacer Bouhanni and Jasper Philipsen.

Cavendish’s victory came at the end of a race which featured a riders’ protest after Monday’s crash-affected stage three.

Geraint Thomas and 2020 runner-up Primoz Roglic were among those involved in crashes, and on Tuesday the peloton came to a halt for a minute shortly after the rollout from Redon, before beginning a go-slow ride for the first 10km.

But on a Tour that has already featured some incredible stories, Cavendish’s resurgence, at a finish where he also won in 2015, will take some eclipsing.

The Deceuninck-Quick-Step sprinter’s return to the race after a three-year absence was only confirmed in the week before it started, after Irishman Sam Bennett was ruled out through injury.

And the way in which the Manx rider collapsed in tears and was embraced by team-mates and rivals alike underlined the scale of his achievement.

‘I didn’t think I’d ever get to come back’

Belgium’s Brent van Moer, part of a two-man breakaway, went solo with 14km remaining to establish a lead of around a minute before Deceuninck-Quick-Step, led by world champion Julian Alaphilippe, took up the chase.

As Van Moer faded in the final 200m, Cavendish powered through and rounded Belgium’s Philipsen before finishing ahead of Frenchman Bouhanni by a bike length.

It was a fairy-tale moment for the Briton, who moves within three stage wins of Eddy Merckx’s all-time record of 34 on the Tour and took possession of the green jersey, which he won in 2011.

“I don’t know what to say, man – just being here is special enough,” said an emotional Cavendish.

“I didn’t think I’d ever get to come back to this race. Fire man, just fire from the whole team. We didn’t know if we were going to get them.

“You just see what a team this is, you’ve got the green jersey, the world champion, he comes to get the final pull to catch the breakaway.

“So many people didn’t believe in me, and these guys do and they did.

“The stars aligned, somehow. I never ever want bad things to happen to other people but after the last year it’s just nice to have some good luck for myself. “