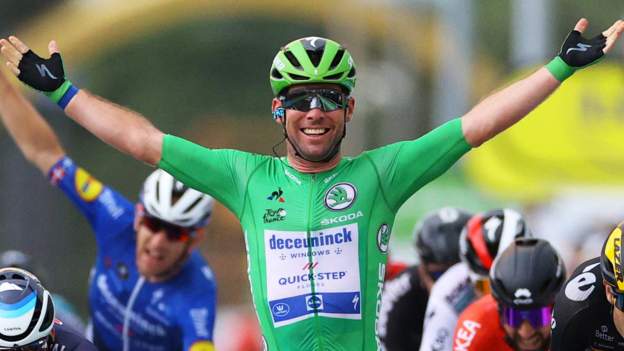 Mark Cavendish sprinted to his 33rd stage victory at the Tour de France to move within one win of Belgian legend Eddy Merckx’s all-time record.

The Manx rider, 36, held off Wout van Aert and Jasper Philipsen to win stage 10 in Valence after a perfect lead-out.

There are two more sprints this week and two more in the last week, ending with the Champs-Elysees finale, where Cavendish has won a record four times.

Cavendish also extended his advantage in the green jersey points classification and now leads Australia’s Michael Matthews by 59 points, with Italy’s Sonny Colbrelli a further 23 behind.

“It was an old-school, run-of-the-mill, like you read in the cycling magazines, textbook lead-out,” said Cavendish, who won the 2011 green jersey.

“We got the lads on the front to pull as fast as they can so no one can come past you.

“I didn’t really do anything until the last 150m because of my team.”

Of his three wins in this year’s race, this victory was perhaps the most reminiscent of the usual way he surged to his 30 stage wins between 2008 and 2016.

With the strongest sprint train in the race dominating the front, Cavendish was able to stay on the wheel of Michael Morkov, widely regarded as the best lead-out man in cycling, to launch late and have time to put his arms up in celebration, even as others closed in.

He once again lavishly praised his team-mates, saying he was “humbled” to have the likes of Tour of Flanders champion Kasper Asgreen and world champion Julian Alaphilippe pulling for him.

Many other elite sprinters are missing, with Caleb Ewan breaking his collarbone in a crash on stage three, which was won by Tim Merlier, who has since abandoned, while Dylan Groenewegen was not selected.

However, that does not diminish the achievements of Cavendish here, having not been used to riding with this sprint train, which had been preparing to ride for last year’s green jersey winner Sam Bennett.

Cavendish had already made a resurgence earlier this year with four wins, but he has taken the opportunity to step in for the injured Bennett brilliantly and completely repaid the faith shown in him by Deceunick-Quick-Step in re-signing him after years of illness and loss of form.

Having not contested the intermediate sprint, Cavendish said after the stage finish that he is only focusing on stage wins and that the green jersey is a bonus.

Yet with his nearest green jersey contenders not threatening in bunch sprint finishes and record seven-time winner Peter Sagan seemingly not challenging for it this year, Cavendish is looking increasingly likely to claim his second green jersey – as long as he makes it to Paris.

Wednesday’s Stage 11 is a decisive day for the general classification contenders, featuring two ascents of the famous Mont Ventoux.