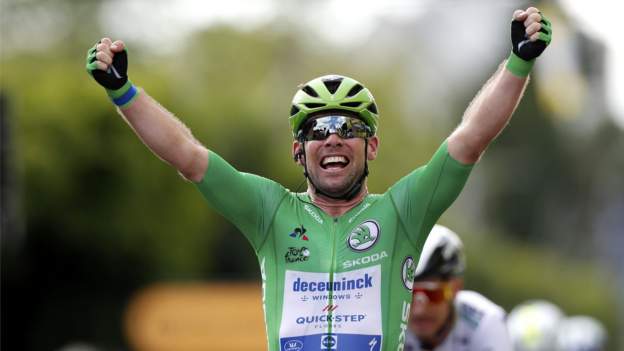 Mark Cavendish’s resurgence continued as he claimed his 32nd stage win at the Tour de France to move closer to the all-time record of 34 held by Belgian legend Eddy Merckx.

Cavendish powered past Jasper Philipsen and Nacer Bouhanni to collect his second stage win at this year’s race.

It is the third time that Cavendish has won in Chateauroux, the scene of his very first victory at the Tour in 2008.

Mathieu van der Poel finished in the peloton to retain the yellow jersey.

Cavendish is ‘really back’

While the general classification battle will step up as the race heads into the Alps this weekend, the flat 160.6km route from Tours to Chateauroux favoured the sprinters, and Cavendish in particular.

On the wide boulevard into the line, the Manx rider displayed his nous and speed to hop off the wheel of his Deceuninck-Quick-Step lead-out man Michael Morkov and sweep past both Philipsen and his Alpecin-Fenix team-mate Tim Merlier.

Such was Cavendish’s margin of victory that he even had time to recreate his hands-on-head celebration from 13 years ago – his maiden Tour stage win.

“Michael [Morkov] left me space on the left to go but I wanted just a split second longer in the wheels so I had to switch trains.

“But you see the guys, how much they pull. You’ve got the world champion Julian Alaphilippe just burying himself in the last kilometres, it’s something special. I’m buzzing now.”

His performance led to more emotional scenes at the finish, with Morkov telling reporters “he’s back, he’s really back”.

Cavendish, who has battled illness and injury in recent years, feared his career was coming to an end last winter when he was left without a team.

But having replaced the injured 2020 green jersey winner Sam Bennett just days before the Tour was due to start, he is making the most of his opportunity to return to the limelight at the age of 36.

“I am not thinking about anything,” Cavendish said. “If it was my first or my 32nd, I have just won a stage of the Tour de France, that is what people ride their whole lives for.