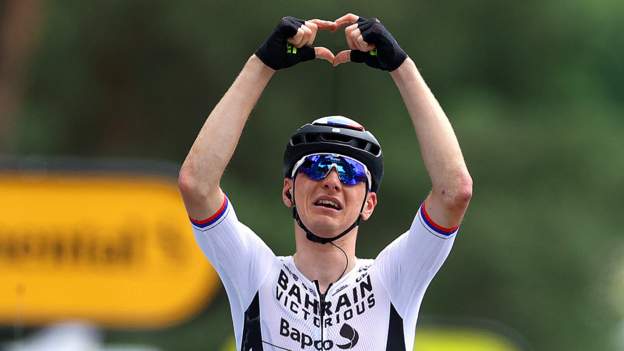 Mohoric, 26, was in a group that went clear with 50km to go before he powered to a first Tour stage success.

Van der Poel, also in the break, was not chased by defending champion Tadej Pogacar, who should still regain time in the Alpine stages over the weekend.

Bahrain Victorious rider Mohoric has now won stages at all three Grand Tours – the Tour, the Giro d’Italia and the Vuelta a Espana.

He rode a superb race, kicking clear of the three other riders in the leading group on the toughest climb of the day with just under 20km remaining, to finish one minute and 20 seconds ahead of Jasper Stuyven in Le Creusot.

“I knew it was a good stage for me and I saw there was only one more stage after this that suits me so I focused on this,” said Mohoric.

“I’ve won at the Giro and Vuelta but this is the Tour, it’s the biggest race, so this is something else.”

Britain’s Mark Cavendish, who claimed his 32nd stage and second of the race on Thursday, won the intermediate sprint to extend his lead in the green points jersey to 65 points over Van der Poel.

Van der Poel finished fourth on the stage, 1:40 down on Mohoric, but 3:35 ahead of Pogacar, who dropped to fifth overall, behind Kasper Asgreen and Mohoric.

Pogacar will be content to concede time to riders such as Van der Poel and Van Aert, who he will not view as overall contenders, because it means less time having to defend the lead.

His UAE Team Emirates squad fell away as the teams of the other overall favourites upped the pace, though the Slovenian was still able to finish in the peloton.

However, compatriot and last year’s runner-up Primoz Roglic struggled badly, having been injured in crashes during the first few days.

He is now down in 33rd place, over nine minutes behind Van der Poel.

Ineos Grenadiers’ Richard Carapaz launched a long-range attack once Roglic was in trouble, but he was shut down by Movistar and failed to gain any time.

The Ecuadorian is now 12th overall, 5:19 down, with Welsh team-mate Geraint Thomas one place and 10 seconds further back.

A large shake-up of the general classification is expected over the weekend, with two tough mountain stages to come before Monday’s first rest day.