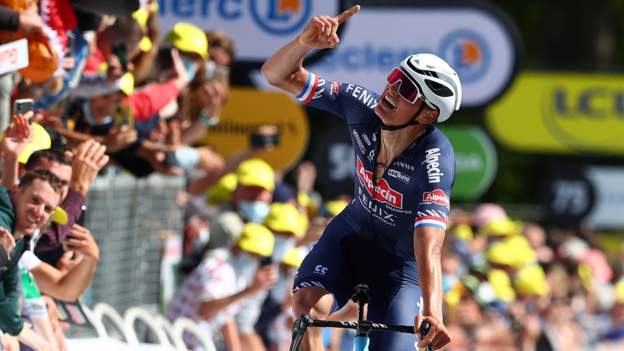 The Dutch rider twice powered clear on the double ascent of the Mur-de-Bretagne in a thrilling finale.

Defending champion Tadej Pogacar and 2020 runner-up Primoz Roglic, were second and third on the 183.5km route.

As he crossed the line, Van der Poel pointed to the sky in tribute to his late grandfather, Raymond Poulidor.

‘I just imagine how proud my grandad would be’

“It means the world to have this jersey on my shoulders,” said Van der Poel

“Unfortunately, he is not here anymore but I just imagine how proud my grandad would be. I gambled a little bit, I played everything I’ve got because I knew I needed the bonus seconds if I wanted the jersey.

“It was also my last chance to get the yellow jersey, it’s incredible.”

Van der Poel, 26, riding on only his second day on the Tour, takes the yellow jersey from Julian Alaphilippe, who won Saturday’s crash-affected opening stage but had no answer to a decisive attack from his fellow puncheur.

Alaphilippe is now eight seconds behind while Pogacar and the 2020 runner-up Roglic, who were virtually inseparable on the road, occupy third and fourth places in the general classification standings.

The Slovenian duo’s second and third places in the stage are in the same order in which they collected the first set of bonus seconds on the Mur-de-Bretagne behind Van der Poel.

Ineos Grenadiers came into the Tour with arguably a four-pronged attack for the general classification, with Geraint Thomas, Tao Geoghegan Hart, Richie Porte and Richard Carapaz.

However, Geoghegan Hart and Porte both conceded significant ground after being caught up in crashes on stage one and the conclusion to stage two saw another unwelcome development as 2018 winner Thomas was distanced at the finish.

The British team had controlled the pace up the final climb and while his team-mate Carapaz was in the group that finished eight seconds behind Van der Poel, Thomas slipped 23 seconds and now trails the maillot jaune by 41 seconds, having dropped from 10th to 20th overall.

Stage three on Monday sees the race travel on a relatively flat 182.9km course from Lorient to Pontivy.

That should provide an early indication of Mark Cavendish’s form, with the winner of 30 stages looking to make further inroads into Eddy Merckx’s record tally of 34.

With stage one having been badly affected by two major crashes, four official race cars preceded the peloton on Sunday to keep the road clear of overexcited fans.

Despite the safety measures, however, the peloton was forced to slow down at times due to spectators spilling on to the course, while some riders could be seen waving towards the fans to tell them to stay off the road.

Earlier, youths had set off flares and fireworks by the roadside at the moment the riders were speeding past them.

As the riders took to stage two, French police launched an investigation into the multi-rider pile-up on Saturday which was caused by a spectator who leant into the path of the speeding peloton while holding up a sign.

The police said they intend to charge the unnamed spectator with “unintentional short-term injury through a manifestly deliberate breach of a duty of safety or care”.

Fans have lined the streets over the first two days following the relaxation of French coronavirus restrictions.

“We are suing this woman who behaved so badly,” said Tour deputy director Pierre-Yves Thouault.

“We are doing this so that the tiny minority of people who do this do not spoil the show for everyone.”