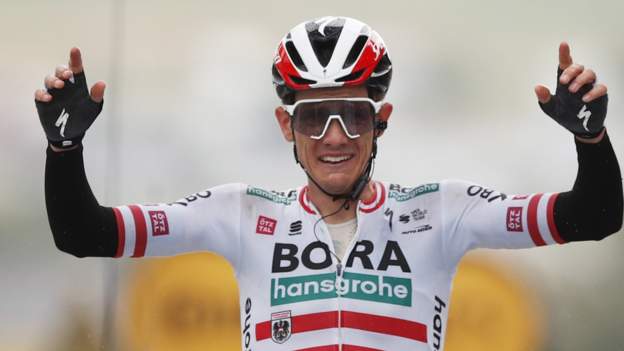 Patrick Konrad from Austria held on to clinch a thrilling solo victory on stage 16 of the Tour de France.

He attacked out of a breakaway on the Col de Portet-d’Aspet, the penultimate climb of the hilly 169km stage.

It is the 29-year-old’s first Tour stage and first professional win.

Tadej Pogacar retained the yellow jersey as the group of overall leaders crossed the line almost 14 minutes later with no significant changes at the top of the general classification.

The Slovenian had to stay alert for attacks from his rivals on the final climb and then the sprint to the finish but otherwise this was another relatively stress-free ride for the defending champion as the race resumed following Monday’s rest day.

Damp conditions on the treacherous descent of the Portet-d’Aspet were the main concern for the big hitters in the peloton, who seemed to be saving their legs for Wednesday’s gruelling summit finish at the 2,215m Col du Portet.

‘It is going to be the hardest day in the Tour’

“It was quite a hectic day,” Pogacar said. “We started in super cold weather, then the fight for the breakaway was again really big in the first two hours until it settled down.

“At the end there were fireworks again – I don’t know what happened at the end of that final climb, I just followed the wheels – but it was good to open the legs for Wednesday.

“I’m not worried but I think it is going to be a really hard day – the hardest day in the Tour.”

Britain’s Mark Cavendish finished more than 23 minutes behind Konrad but was still well within the time limit for completing the stage.

Cavendish retains the green jersey as the leader of the points category but saw his lead cut to 37 points by Australian Michael Matthews, who finished third.

Matthews was part of a nine-man chase-group that also included France’s David Gaudu and Italy’s Sonny Colbrelli that was unable to reel in Konrad in the final few kilometres.

The Austrian mounted a solo attack more than 30km from the finish, and said: “I was already three times in the break but always waiting until the final chance.

“It is not always a good decision to go early but I gave it a try and I am really happy that I had the legs to get to the finish.

“It is my first win on the world tour and this is the biggest cycling race in the world, so I am really speechless. I am super, super happy.”