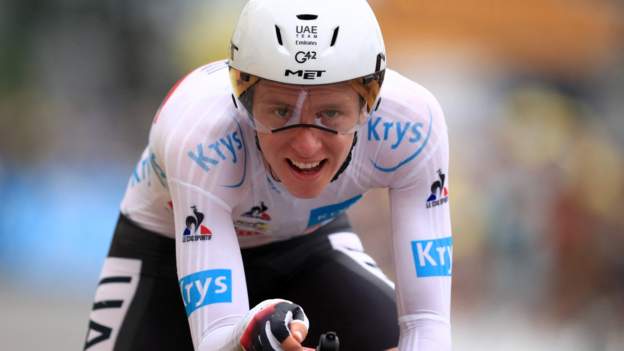 The Slovenian’s stunning ride saw him put more time into his rivals and almost claim the overall race lead.

But Van der Poel produced a defiant effort to finish fifth in Laval and is now eight seconds ahead of Pogacar.

“It was a really good day for me, luckily I had perfect conditions,” said Pogacar, who now has four stage wins at the Tour overall.

“I gained time so I’m super happy and excited for the whole Tour.

“I would love to have the yellow jersey too but it also looks super nice on Mathieu.”

Pogacar is now likely to take the yellow jersey before the week ends, having claimed it on the penultimate stage last year by overhauling compatriot Primoz Roglic in a thrilling time trial.

Defending it over two weeks will represent a new challenge for him and his UAE Team Emirates squad, but he already has an imposing lead over his main rivals.

Jumbo-Visma’s Roglic, who is heavily bandaged after being caught up in crashes on the first few days, produced a fine ride to finish seventh on the stage.

He has moved up to 10th overall but is already 1:48 down on his fellow pre-race favourite.

It was a tough day for Ineos Grenadiers’ leaders as 2018 winner Geraint Thomas, who sustained a dislocated shoulder in a crash on stage three, recorded 33:18 to finish 16th.

The Welshman is now 12th overall, 1:54 back on Pogacar, while Richard Carapaz just had to limit his losses, with the Ecuadorian slipping from third to ninth overall, 10 seconds ahead of Thomas.

“I woke up this morning and felt terrible but once I got going it was better. I’ve just got to crack on and deal with it.”