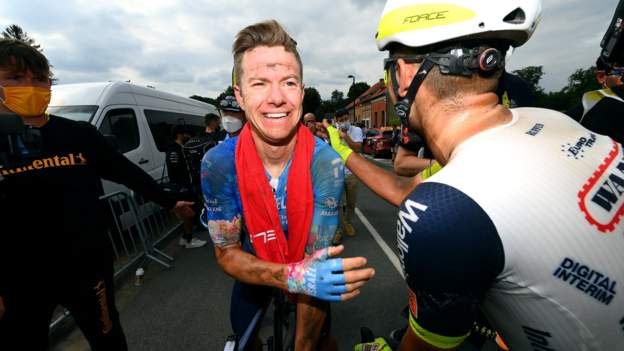 Australia’s Simon Clarke won a chaotic stage five of the Tour de France after a photo finish in Arenberg as defending champion Tadej Pogacar made gains on his main rivals.

The cobbled sections on the 157km route between Lille Metropole and Arenberg Porte du Hainaut added an element of stress to the peloton with Michael Gogl and Jack Haig becoming the first riders to abandon this year’s race.

While it was a notable day for Australia’s Clarke, 35, as he claimed Israel-Premier Tech’s first win on a stage at the Tour, Pogacar appeared the main beneficiary in the overall race for the yellow jersey.

The two-time winner managed to steer clear of trouble and saw Roglic concede more than two minutes after a crash on a roundabout involving Australian sprinter Caleb Ewan.

The fall, which came after an errant hay bale moved into the path of some of the riders in the main group chasing Clarke’s breakaway section, saw the Slovenian dislocate his shoulder and then put it back into place.

“I couldn’t put it immediately back in on the road so I had to sit in the chair of a spectator,” Roglic said. “I have a technique to put it back in.”

By that stage, his Jumbo-Visma team-mate Vingegaard was already attempting to make up time after a puncture left him over a minute behind Pogacar.

However, the Dane aided considerably by a huge effort from Van Aert, managed to limit his loss to just 13 seconds and came home in a group alongside Thomas, who had looked in a promising position until suffering a crash around 30km from the finish.

“[Jack] Haig and a few of the Bahrain Victorious guys came down right in front of me. I almost missed it but I got taken out. Tom [Pidcock] stayed with me and we were chasing back,” said 2018 Tour champion Thomas.

“I got the chain back on and got back up pretty quick but it’s a small gap. There’s not lot you can do with 30km to go.

The Welshman is now 10th in the general classification with his Ineos Grenadiers team-mates Adam Yates and Tom Pidcock in eighth and ninth.