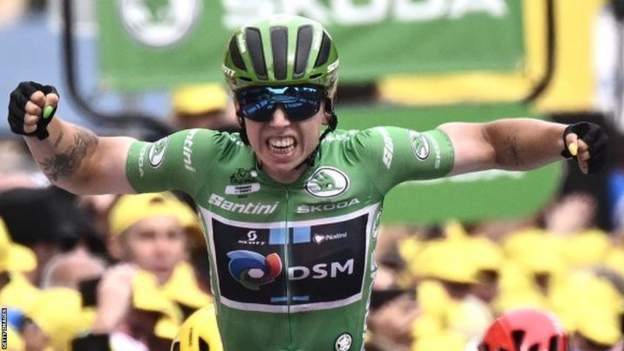 The Dutch rider, 23, sprinted to victory in Saint-Die-des-Vosges after a hilly 175.6km stage from Bar-le-Duc.

A third-place time bonus saw Vos push her lead from 16 to 20 seconds over Italy’s Silvia Persico and Poland’s Katarzyna Niewiadoma.

A dramatic crash with just over 45km remaining in the stage – the longest ever of a women’s race in the modern era – split the peloton and forced Movistar rider Emma Norsgaard to abandon the race.

The peloton eventually came back together and Vos maintained her impressive record of finishing in the top five of every stage so far.

Elisa Longo Borghini now trails the leader by 34 seconds having lost 13 seconds in the last 500 metres, when she took a wrong turn at a vehicle deviation area.

Asked if she was the best sprinter in the world right now, Wiebes said: “If you want to say it. I don’t like to say it for myself. Today I was happy to deliver this sprint after such a long stage.

“It’s still a goal to get the green jersey [for points classification], but we also want to stay in the general classification with Juliette [Labous]. It was a real team effort and that was the most important thing.”