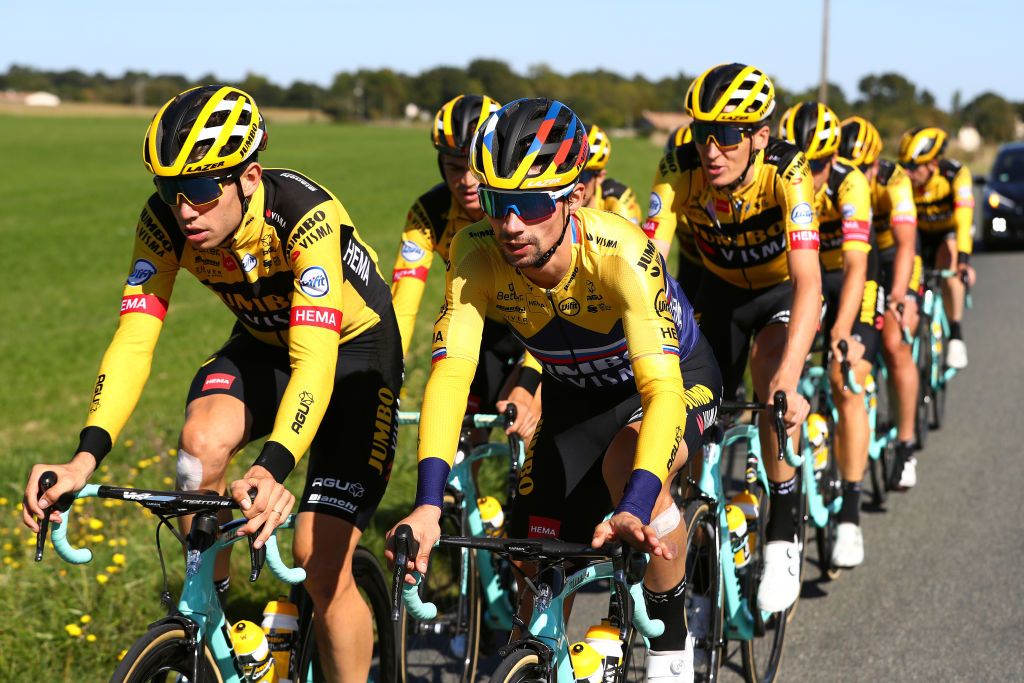 Primož Roglič (Jumbo-Visma) came through an almighty scare on stage 1 of the Tour de France after a spectator caused a major pile up that took down not only the race favourite but also half of his team.

Wout van Aert, Tony Martin, Mike Teunissen, Sepp Kuss and Roglič all needed varying degrees of medical treatment after being taken down in a fall with around 45km to go on the opening stage from Brest after a spectator stood too close to the road and held a sign out in front of the riders. Martin, who was second wheel at the time, had no where to go and was the first rider to hit the deck with Roglič landing on his back and Kuss’ bike being totally destroyed.

Roglič managed to remount on a teammate’s bike and even gain time on the stage thanks to a third place finish behind Julian Alaphilippe and Michael Matthews but Teunissen was sent for medical checks, while Martin was seen covered in road rash and cuts.

“Mike has to go for X-rays to his hip, wrist and elbow,” the team’s senior director sportif Merjin Zeeman told Cycling News at the finish.

“We have to see. Tony has some injuries but he said on the bike that he was OK, despite his wounds. Primož crashed but I think that he’s OK. Sepp’s bike was totally destroyed but we were also car number 23 so that took a really long time before he got his new bike because we were car number 23. He lost a lot of time with that.”

The crash once more calls into question the safety at the Tour de France with the general public allowed to get stand next to the race. Most spectators and fans arrive at the Tour with general degree of common sense but one small error can have catastrophic ramifications on the race and Roglič was overwhelmingly lucky to come off without any serious injuries.

Jasha Sütterlin (Team DMS) was not so lucky and was forced out as a result of the crash and a frustrated Zeeman openly called on more to be done to improve the safety for riders and fans.

“On the first crash it’s because the public are there and there are no fences, it’s not regulated and they’re standing on the roads. It’s ridiculous. It’s months of training with our partners. If you see the cost of the damage of that crash, you don’t want to know, but it’s hundreds of thousands of Euros. The Tour de France is such a big race, you’d have create space with the public all over the parcours, not only in the last kilometres. It’s so dangerous. Also when you’re driving behind with the car, people are drinking the whole day, it’s really, really dangerous.”

Zeeman acknowledged that complete road barriers on a 198km course is virtually impossible to achieve unless the route takes place on a closed circuit but the Dutchman reiterated that similar incidents like the crash with 45km to go would continue to happen if more wasn’t done – primarily by the race organiser – to improve safety aspects.

“Maybe it’s not possible with fences all over the parcours but then you get situations like this. If you don’t regulate things on those climbs or narrow roads then you’ll have situations like this and more of these incidents. The riders don’t see it because it happens in a split second and the public they don’t understand. It’s the Tour de France, we all know that this can happen in the first week.”

SOURCE: CyclingNews   (go to source)
AUTHOR: Daniel Benson,Stephen Farrand
All copyrights for this article, including images, are reserved to the original source and/or creator(s).