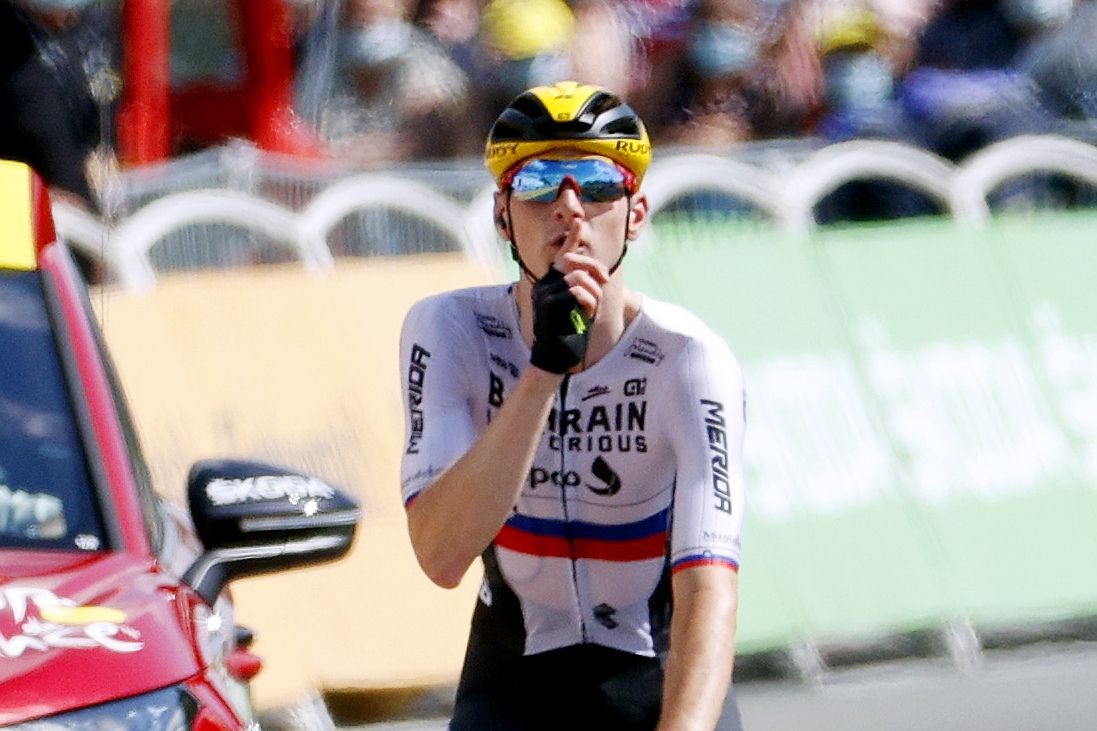 After triumphing solo at Le Creusot in the first week of the Tour de France, Slovenian Matej Mohorič (Bahrain Victorious) took a second breakaway victory on stage 19 in Libourne. No matter what had come before in the stage’s 207 kilometres, it was Mohorič’s winning gesture as he crossed the line, placing a finger to his lips, that sparked many of the post-stage media questions.

Between the two stage wins had come Wednesday’s police raid on the Bahrain Victorious team hotel in Pau, of course, where riders’ hotel rooms and the team bus were searched, training files seized, and some of their phones confiscated in an ongoing anti-doping investigation.

Cue Friday’s ‘silence’ gesture by Mohorič. It was, he said, “just a sign to show to people that question our performance to be mindful that we are making huge sacrifices with our work, with our nutrition, with our training plans, with our race plans, with all the time we spend away from home in training camps.”

Mohorič added that his initial reaction at his team being subject to a police investigation was to feel ‘weird’. But then with time he had taken a more upbeat stance about it all and that questions about his sport were good to have given there had been “big problems in the past.”

“My generation, myself, we never saw these things happen or anybody possess anything illegal,” he categorically stated. And if anybody needed to check his phone or his belongings to ensure that Bahrain Victorious’ status as one of the best teams in the world was cleanly achieved, he said, “then so be it.”

Mohorič said there were other positive conclusions to be drawn from the police raids, such as how it could unite the team more. “We are more determined to prove we have nothing to hide and to do our best on a level playing field.”

Mohorič said that he had been partly motivated by Thursday’s events to take part in another breakaway and see if he could repeat his stage win of the first week at Le Creusot. But while Le Creusot’s ultra-hilly finale had always been likely to conclude in a breakaway win, there was far less certainty governing the much flatter roads to Libourne.

“We believed it could be a sprint stage but we also knew that in the third week all the teams are tired,” he pointed out. “I knew I had to follow the breakaways, particularly for the teams classification [which Bahrain Victorious are currently leading].

“There was a very nervous start and a first crash and I made a big effort to get in the break. Then when the peloton settled down, I tried to convince them to ride hard because that way maybe the peloton would stop chasing.”

Mohorič’s personal situation in the break grew more complicated when another 15 riders got across, none of them from his team. But he managed to latch on to the right move at the right time.

“Nils Politt [Bora-Hansgrohe] had made a massive attack and it had come back. And I said to myself ‘close your eyes and sprint to the very top of the climb’ and see what happens.”

What happened was that at 20 kilometres from the finish, and thanks to that acceleration, Mohorič found himself alone at the head of the field. That situation remained unchanged all the way to the finish, with Mohorič leading the rest of the 20-man break home by nearly a minute.

His little secret, as he called it, was a massive gear in the final part of the stage. “I always use a 55×42 for the Tour, it gives me an advantage on the downhills and false flats.” he explained. “It helps me recover.”

With one Slovenian winning the stage, Bahrain Victorious’ third in this year’s race, and another close to winning the Tour for a second straight year, questions for Mohorič about compatriot Tadej Pogačar’s (UAE TeaM Emirates) imminent triumph were all but inevitable.

“He’s very calm and collected, he’s always paying attention and he never gets stressed. I’d say he’s a super gifted guy, even if he doesn’t know his own limits.”

Interestingly, he argued that the differences between Pogačar and the rest of the field were not as big as they seem.

“The others are not that far off, they had bad luck,” he said, “he was one who got the best out of the start of the Tour.

“But he’s proved he’s the best climber in this year’s Tour and I just hope he brings the yellow jersey all the way to Paris.”