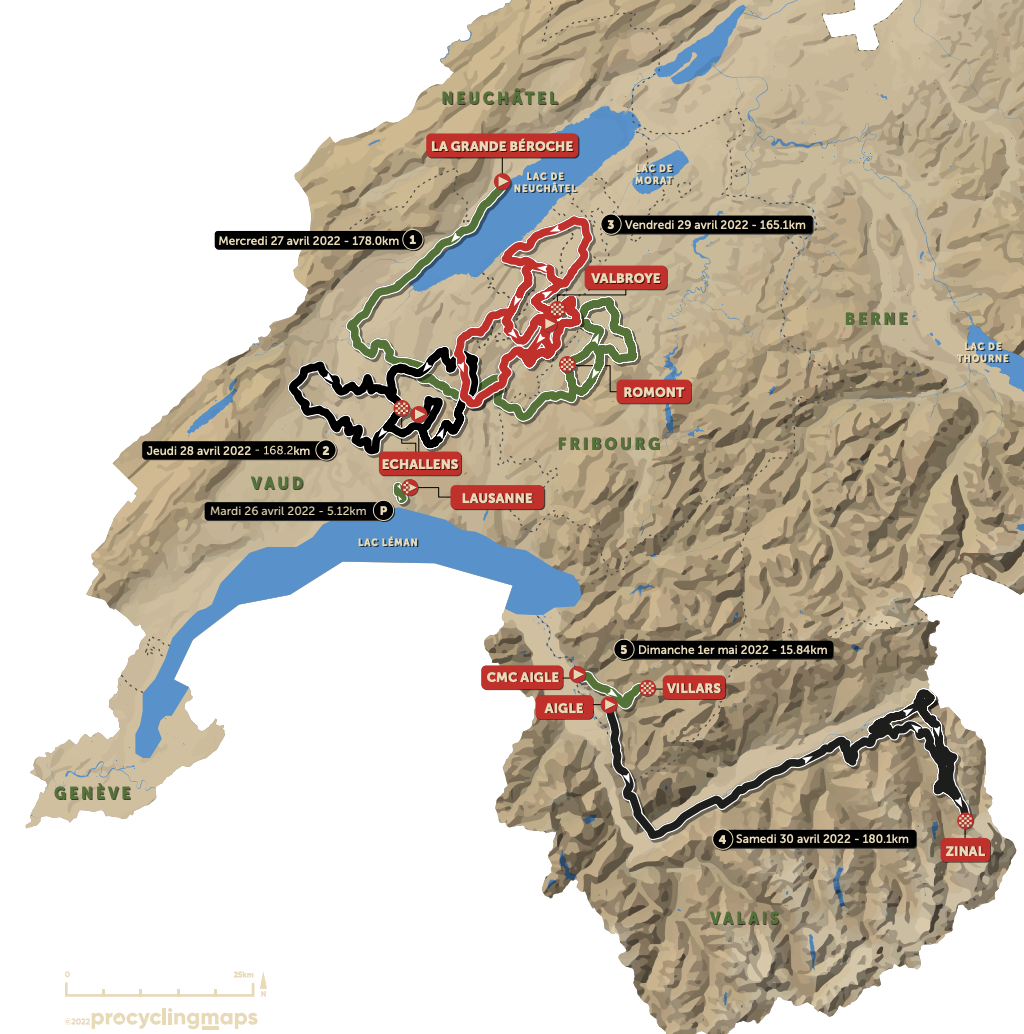 The 712 kilometres covered over the six-day Tour de Romandie provide 13,400 metres of elevation gain, which organisers say makes this the second-most difficult edition of the race in 75 outings.

The prologue in Lausanne, Switzerland on Tuesday is a flat opening to a week of climbing with a start around the new Stade de la Tuilière. Raiders will go around the old Stade de la Pontaise and then onto the runway at La Blécherette airport, which is a first for the race. Riders pass under the red kite halfway on the 1.5km sectio of the runway, then tackle a slight ascent with two technical turns to the finish line.

Stage 1 offers four category 3 climbs across 178km from La Grande Béroche to Romont.  The approach to the final includes two hilly loops of 46km each leading to the line at the fort of Romont Castle. The route has nearly 3,000 metres  of climbing, with the last KOM of the day being just 15km from the finish line.

The routes for the next two days are loops, with the first on stage 2 travelling around the Vaud Region with the start and finish in Echallens. There is only one King of the Mountain climb, set at the half-way point of the 168 kilometres. There is still 2,600 metres of climbing, with a flat 2.5km run-in for the finish.

The Queen Stage is set for stage 3, with six categorised climbs, four of them at category 1, and 4,160 metres of elevation gain over 180.1 kilometres between Aigle and Zinal / Val d’Anniviers. The start is from Aigle, know for its medieval heritage, wine-growing culture and site of the UCI World Cycling Centre. After a flat start, the road tilts skyward after 40km for the first KOM at Nax. After a fast descent, the route will climb Les Pontis on the first of two passes. The road after the first ascent of Les Pontis continues to rise to category 1 Saint-Luc (1,564m) and second-categoryLes Ziettes d’en Bas. After a second pass of the intermediate sprint in Siere, the riders make the climb to Zinal across double first-category cliimbs, Les Pontis and Grimentz (1,563m).

The race concludes with the individual time trial towards Villars-sur-Ollon. Riders will begin back in Aigle in front of the World Cycling Centre for 15.8 kilometres. The opening five kilometres are flat, leading to 900 metres of elevation gain from Oilan, through Huémoz, Chesières and into Villars.