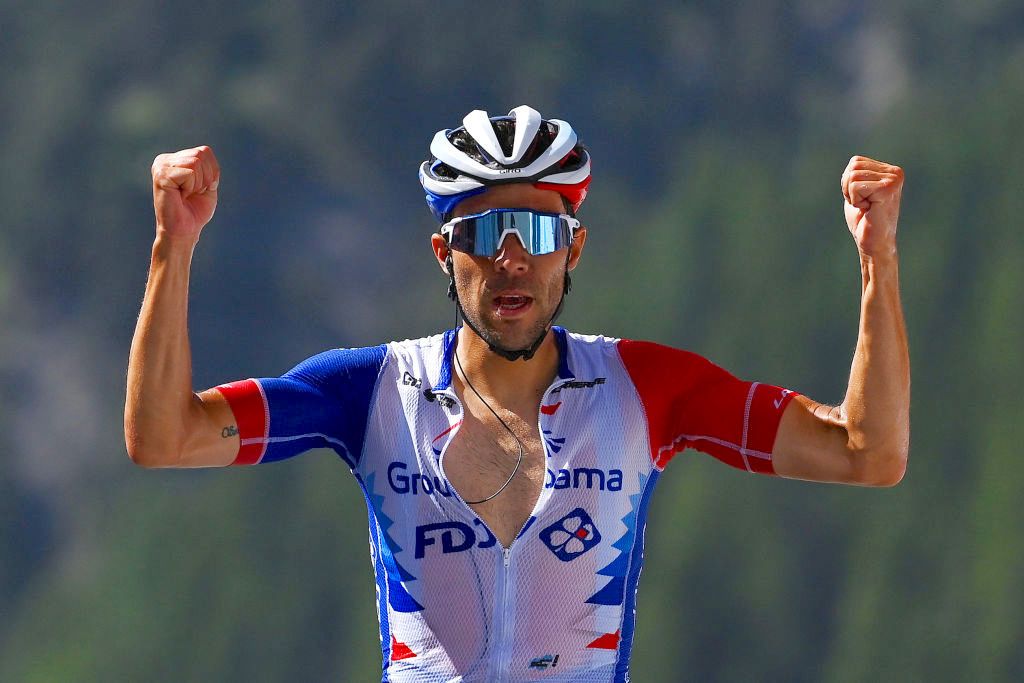 Thibaut Pinot (Groupama-FDJ) soloed to victory on stage 7 of the Tour de Suisse as Sergio Higuita (Bora-Hansgrohe) moved into the yellow jersey, but Geraint Thomas (Ineos Grenadiers) is within touching distance of overall victory after the summit finish at Malbun.

While Higuita jumped away from the group of favourites with 2km to go to move into yellow, Thomas managed to drop overall leader Jakob Fuglsang (Israel-Premier Tech) in the final kilometre. He limited his losses on Higuita to 11 seconds and he will start Sunday’s final time trial in Vaduz just 2 seconds behind the Colombian.

Pinot claimed stage honours from the day’s early break, which forged clear on the Lukmanierpass. The Frenchman opted not to follow the attack of Ion Izagirre (Cofidis) and Alexey Lutsenko (Astana-Qazaqstan) on the lower slopes of the final climb to Malbun, preferring to bide his time and strike closer the summit.

Pinot would catch and pass first Lutsenko and then Izagirre to claim stage honours. Another member of the day’s early break, Oscar Rodriguez (Movistar) showed similar resolve to take second on the stage ahead of Lutsenko.

The Tour de Suisse peloton was reduced to just over 80 riders by a cluster of COVID-19 cases on Friday, but Ineos and Israel Premier Tech combined well to keep tabs on the sizeable early break.

Thomas’ teammate Dani Martinez whittled the yellow jersey group down to its bare bones on the upper slopes of the final climb. After he swung off, Higuita launched his attack to claim yellow. Fuglsang initially led Thomas until the final kilometre, at which point the Welshman accelerated and set off in lone pursuit of Higuita.