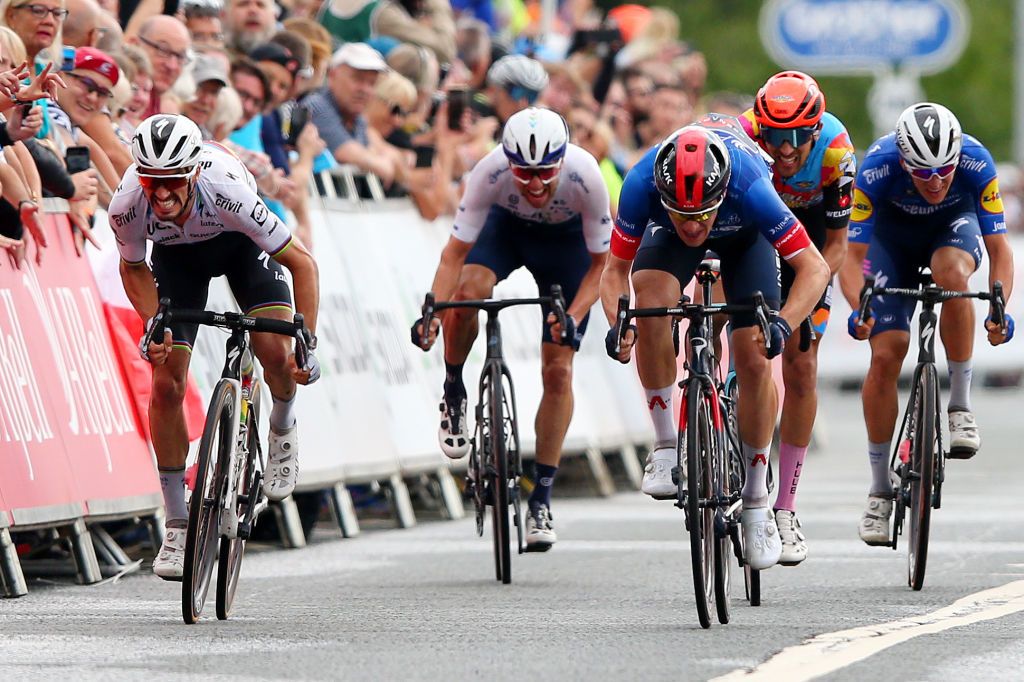 Ethan Hayter had to settle for second place on stage 6 of the Tour of Britain but was most of all happy to have retained the leader’s jersey, which he said was “saved” by his teammate Carlos Rodríguez.

Hayter had snatched the overall lead back from Wout van Aert with victory the previous afternoon but was caught on the back foot when the Belgian champion launched a surprise attack on a short climb inside the final 15km of Friday’s stage.

Hayter described himself as “on the limit” and it was Rodríguez, the 20-year-old second-year pro, who dragged him back into contention as his rivals, including world champion Julian Alaphilippe (Deceuninck-QuickStep) threatened to head up the road.

Rodríguez’s presence in what turned out to be a select lead group of 10 turned out to have knock-on importance, as he was able to shut down further attacks and indeed to discourage them by setting a strong pace on the front while Hayer marked his rivals.

“It all kicked off with 15km to go on that climb. Van Aert was opening it up and the race was in pieces. I wasn’t playing it cool, I was on the limit,” Hayter revealed at the finish.

“But I knew, with Carlos there… he kind of saved me, otherwise I would have been open to a lot more attacks. He was closing stuff and set a good tempo and in the end it put everyone off attacking, especially in the last few kilometres.

“Carlos probably saved the jersey today, because having it as group sprint was a lot better than people attacking, because people would have just looked to me to close everything and I would have exploded probably.”

In the end, Hayter sprinted against Van Aert and Alaphilippe for the win from that 10-man group. He managed to get around the world champion, who was led out by Mikkel Honoré, but Van Aert, winner of two stages already, proved imperious and breezed past on the left.

Hayter, who has finished no lower than fifth so far, could hardly be disappointed.

“To be honest I was quite happy with second today. I was on the limit at one stage, so to be there in a sprint with Van Aert and Alaphilippe was pretty cool,” he said.

“It came down to a sprint, and I could have played it a bit differently maybe. I was behind Alaphilippe and Honoré, they were leading out. I think Van Aert was strongest. But to be second on the stage and keep the jersey is a very good result for me and I look forward to the next two days.”

Hayter’s second place ensured the navy jersey remains on his shoulders but Van Aert’s win did see his lead halved as it became clearer still that this Tour of Britain is a battle of bonus seconds.

Van Aert now leads Hayter by four seconds, with Alaphilippe third at 21 seconds. Two stages in Scotland remain, featuring similar terrain that could produce more bunch or reduced bunch finishes, meaning the overall title could come down to the wire and to the bonuses on the final finish line in Aberdeen on Sunday afternoon.

“It’s great to keep jersey. The gap is now four seconds, so if he [Van Aert] does it in time bonuses there’s not much I can do about that,” Hayter said.

“But I’m happy to be leading the Tour of Britain still – it’s amazing.”