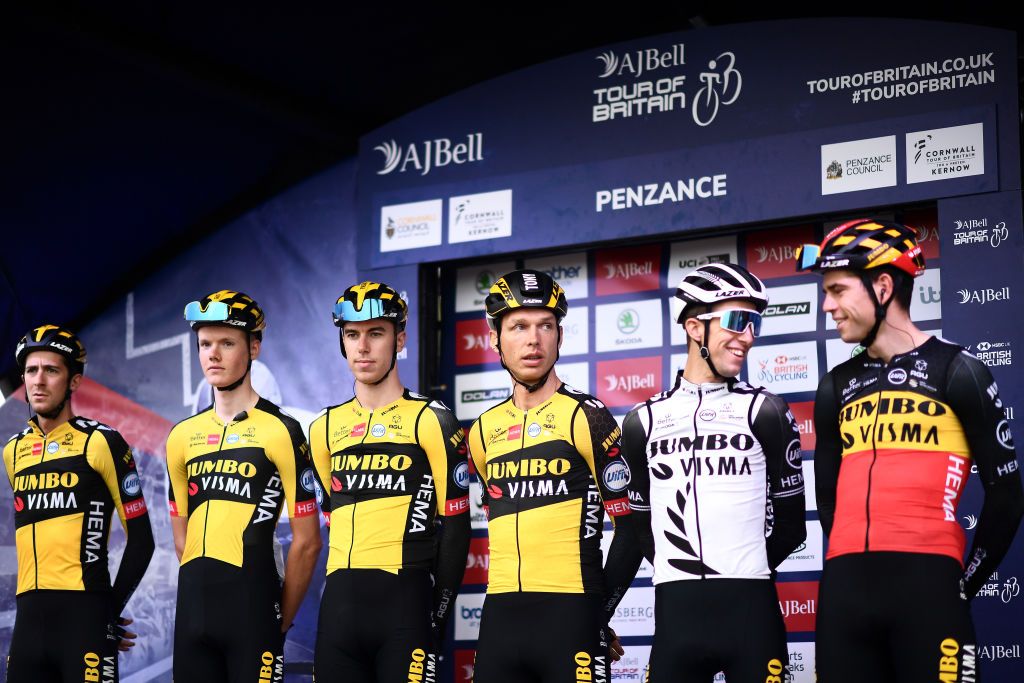 Wout van Aert (Jumbo-Visma) not only lost the blue jersey of the leader at the Tour of Britain on stage 2 but also a valuable teammate to help in the battle to reclaim it, with Australian rider Chris Harper crashing early in the 183.9-kilometre hilly stage from Sherford to Exeter.

The loss of Harper, who had his elbow stitched up in hospital following the crash, leaves the team one man down heading into the crucial hilly 18.2 kilometre stage 3 team time trial, with the course from Llandeilo to the National Botanic Garden of Wales expected to provide a major GC sorting.

“It’s a shame that Chris crashed out of the race today,” sports director Frans Maassen said in a statement. “The plan was to create a good starting position for the team time trial tomorrow. Due to the loss of Chris that plan is more or less out the window.”

“The result today is fine, but we had to do more work than planned and hoped for.”

Van Aert, who is using the eight-day race as preparation for the World Championships, claimed victory and consequently the race lead on the opening stage, where he sprinted to the win. The Belgian champion, one of the key favourites, had said before stage 2 that the second day didn’t suit him as well, so there was no expectation he’d chase the win.

The peloton, however, was still looking to the team of the race leader to work to keep the gap to the break out the front in check, with five riders going away early in the stage and taking a lead approaching eight minutes.

The final survivor of that break, Robin Carpenter (Rally Cycling) took the win, 33 seconds ahead of the depleted peloton, which meant he also stepped into the lead overall, sitting 22 seconds ahead of Van Aert in second and 26 ahead of Ethan Hayter (Ineos Grenadiers). The gaps on the general classification at this point are small, with more than 30 riders within a minute of the lead, though that is expected to change after the team time trial which could make or break the race for a number of the GC hopefuls.

“After tomorrow we have to see what we can do with Wout in the general classification,” said Maassen. “A good team time trial is crucial for a good classification. So it is even more disappointing that Chris is no longer riding.

“Tomorrow we really wanted to show ourselves. The changes we had to make earlier were already not in our favour. We’ll have to see how far we get with five motivated riders in the team.”