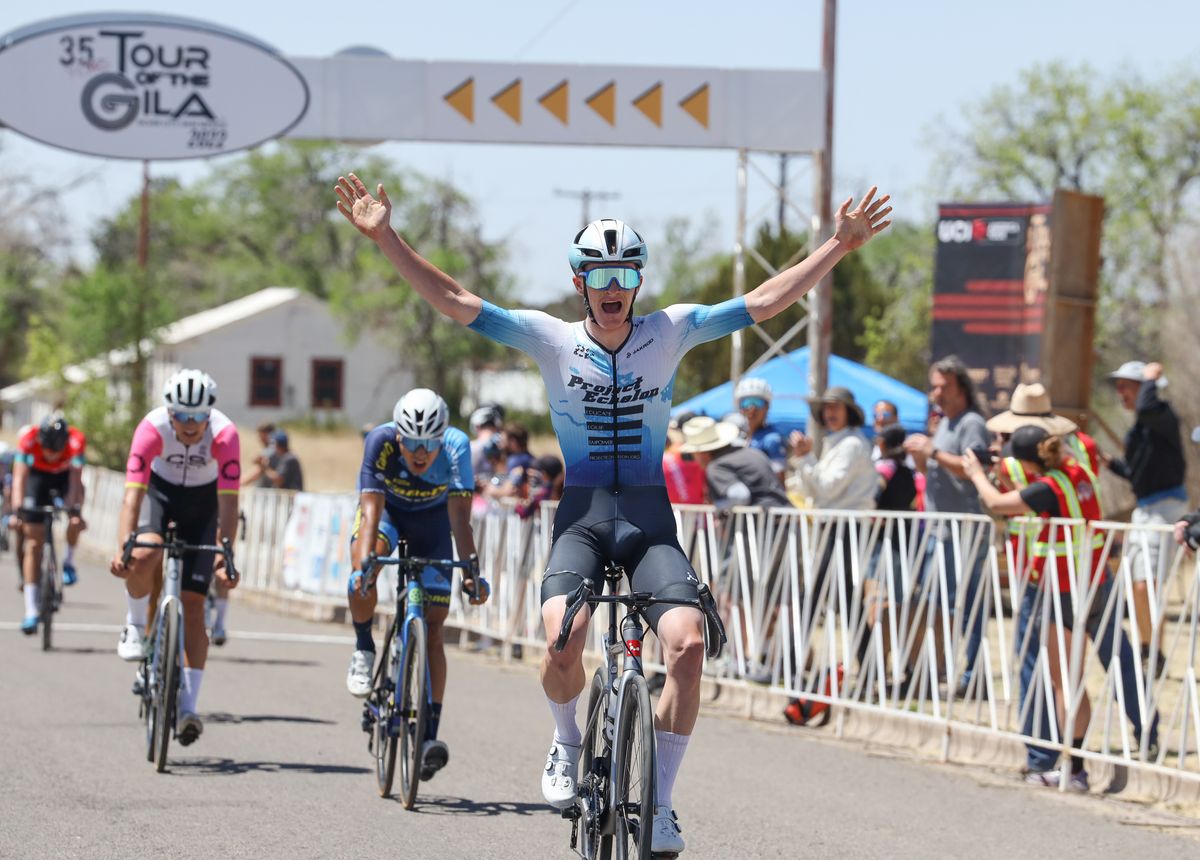 Tyler Stites (Project Echelon Racing) won stage 2 of the Tour of the Gila, outsprinting Ignacio Prado (Canel’s-ZeroUno) to the line at Fort Bayard. Alexander White (CS Velo) rounded out the podium in third.

Prado and White both experienced mechanicals during the Thursday’s Thursday’s 122.6km (76.2-mile) stage and clawed their way back to the reduced field to grab podium positions. White punctured on the final climb, and Prado said he had a derailleur malfunction on one of the first climbs. For Canel’s-ZeroUno, Prado nabbed another second-placed finish in consecutive days, Heiner Parra taking a runner-up position Wednesday on the steep Mogollon climb.

For Stites it was his seventh victory of the year so far, as he came into the UCI 2.2 stage race as the GC winner in the five-day Redlands Bicycle Classic.

“Today’s stage was pretty dynamic. You had climbs and flats and it finishes with a flat sprint, so we were looking to put the leader under pressure,” Stites said. “Then we ended up chasing the break to bring it back, and then Canel’s helped as well. We ended up catching them right at the end. It came down to a sprint, which I like sprinting, so that worked out. I got a few bonus seconds which will help in the GC as well.”

The second day set off under a bright, blue sky for a large loop from Fort Bayard, a post–Civil War Army fort just to the east of Silver City, New Mexico, with three classified climbs and two bonus sprints. Much of the 1,762 metres (5,781 feet) of climbing was tackled in the opening 40km (25 miles) of the race, with two category 3 climbs completed.

A group of nine riders, many with GC aspirations, had gained a two-minute advantage at the mid-point of the route – Matteo Dal-Cin (Toronto Hustle), Matt Jablonski (Cinch Cycling), Alexander White and Sean Gardner (CS Velo), Jordan Cheyne and George Simpson (Project Echelon Racing) and a trio of riders from Aevolo in Gabriel Shipley, Brooks Wienke and Keith Gullickson.

From the second intermediate sprint a few kilometres later, top points taken by Dal-Cin and the CS Velo riders, it was less than 55km to the finish. Another dozen kilometres or so later, Shipley dropped from the lead group. A few kilometres later White had to stop due to a mechanical. With about 15km remaining, another mechanical caused Jablonski to depart the breakaway.

Closing down to 10km to go, six riders pushed on but their advantage was reduced to just 20 seconds. Just before the town of Bayard, it was all back together again mainly downhill for 3.5km and then a slight rise on the final 1.5km for the finish at Fort Bayard.

More to come about GC standings …