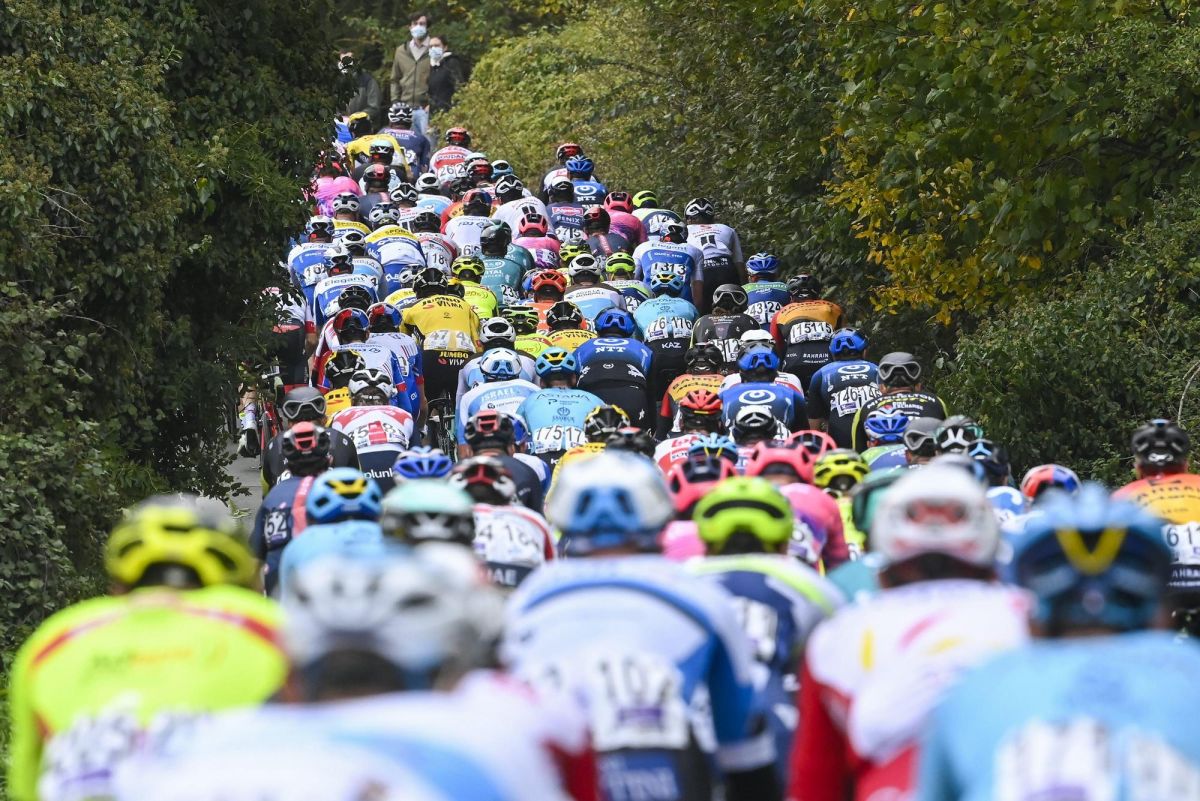 It’s only April, but the transfer market is already building momentum, with teams and riders looking to improve their contracts and situations for next year. The consensus is that, unlike the last few years, the market is relatively stable and, while there are no new WorldTour teams on the horizon for 2022, the majority of the top-tier squads are in reasonably healthy financial positions.

Of course, this is professional cycling and a crisis is never far away, so come August or September that landscape could dramatically change but, at this point, all 19 teams look set to continue into 2022.

Last year, due to the global pandemic, the accord was for riders and teams to focus on survival, with compromises over pay and terms quickly generated as parties looked to stay afloat within the sport. This year’s pro cycling landscape has stabilised and, while Ineos remain well ahead of the game in terms of what they can pay riders, the rest of the WorldTour teams are also back to some level of normality.

Along with the key riders on the market, the major dynamics at play this year are the fact that teams are becoming increasingly desperate to land the next Tadej Pogačar or Remco Evenepoel – essentially a U23 or junior rider who they can snap up now and expect miraculous results from almost immediately.

There’s a real benefit for teams taking this approach but it affects the rest of the market as prices are driven up for a handful of protégés but experienced riders are seen increasingly as replaceable commodities. For example, 20-year-old Luke Plapp, who hasn’t raced a single day in Europe at the uppermost level, has held over a dozen WorldTour suitors but is expected to head to Ineos Grenadiers on a three-year deal worth in the region of 1.5 million Euros throughout the agreement.

“It almost feels like as though one team does a deal as UAE did with Marc Hirschi, and now every team feel like they’re missing out and have to start looking for youngsters,” one team boss told us.

It works both ways. One rider agent, who has riders on several WorldTour teams told Cycling News that team bosses are constantly pushing for younger and younger talent.

“They ask for a sprinter and you come back with two or three riders in their mid-twenties and straight away you’ll get a response that says, ‘that’s too old’.”

Away from the hunt for young talent, a central figure in the market is once again Patrick Lefevere. It’s almost certain that the Belgian Deceuninck-QuickStep boss will have a WorldTour team next year, and the long-term signing of Remco Evenepoel is a signal that the team will have substantial – but not limitless – funds for the coming years. The announcement of a new three-year deal for Alaphilippe on Thursday was another major building block for the Belgian team.

Lefevere might still have only a handful of riders under contract for next year but he’s in an incredibly strong position. The only question he faces is how much of his talent can he afford to retain. Almeida and Asgreen are out of contract, but so too are Remi Cavagna, Sam Bennett, Mark Cavendish, Mikkel Honore, Michael Mørkøv, James Knox, Davide Ballerini, Alvaro Hodeg, and a swag of key domestiques.

Lefevere can try and maintain his exact roster for next year but economics will weigh in at some point and in previous years he’s seen riders like Fernando Gaviria leave for UAE because matching rivals’ offers hasn’t been possible.

It also makes sense for Lefevere to wait before dishing out contracts. The longer he leaves his Classics stars waiting, the more their value diminishes over the summer, while come August and September he’ll still have riders knocking on his door and asking to stay. Although Lefevere has been assured that Almeida isn’t about to repeat history and leave Deceuninck-QuickStep to follow Gaviria to UAE Team Emirates, that move certainly seems possible.

“I’m starting to look to next year but I’m not in a hurry,” Lefevere told Cycling News earlier this week.

“I’m an old man. We used to talk to agents on the first rest day of the Tour and then close deals on the second rest day but already people are pushing me since January. I don’t like that but if some teams start making crazy offers to riders then sometimes you have to join the party. I’ve been promised that Almeida hasn’t signed anywhere yet but that’s difficult to believe. When you have a winning team like we do it’s normal for rival teams to try and pick you apart.”

Lefevere is well versed in the nature of the transfer market and the games that come with it. His public spat with Ralf Denk at Bora-Hansgrohe could well just be a ploy to destabilise Sagan but the three-time world champion has been on Lefevere’s radar for over a decade, and he almost signed the rider before he turned professional.

A move to Deceuninck-QuickStep would ultimately see Sagan’s salary drop but that’s an almost inevitable outcome after a long spell that has seen the rider’s form dip from the heady heights it once consistently sat on. Lefevere also has experience in creating space for stars by structuring their deals towards lower salaries and heavy bonuses. Plus, with Mike Sinyard at Specialized already a willing partner in the resurrection of Mark Cavendish, there is a genuine chance that Sagan winds up in Lefevere’s stable. Any deal comes down to what Sagan is asking for in the market but there will be few teams willing or able to match his current wage.

No two teams enter this year’s market in the same position. For squads such as Movistar and AG2R Citroën, the need is to vastly improve their rosters after disappointing starts and questionable moves in the off-season.

The French squad have about 10 spots that could potentially be upgraded on, while Movistar have to navigate between a complete overhaul like they had two years ago or carrying out a subtler approach. With Alejandro Valverde set to retire and Marc Soler out of contract and bound to attract attention, team manager Eusebio Unzué needs to clear the decks and establish where his team is going to deliver success because of some of the promising talents they invested in two years ago aren’t ready just yet.

Astana are another team that could potentially see a huge turnover in riders. Their squad is settled but Alex Aranburu, Alexander Vlasov, the Izagirre brothers, Harold Tejada, Merhawi Kudus, Omar Fraile, and Jakob Fuglsang are all out of contract this winter. Bahrain Victorious have Landa, Wout Poels, Matej Mohoric and Pello Bilbao out of contract, while Bora-Hansgrohe have to make new offers to Emanuel Buchmann, Lennard Kämna and over half of their current roster even without facing the Sagan question.

EF Education-Nippo made all of last year’s squad one-year deals over the winter and they’re close to making some further announcements with some of the current team up until 2023-4 but Alberto Bettiol and Sergio Higuita are both on the market, along with Logan Owen, Jonathan Caicedo, Ruben Guerreiro, Tejay van Garderen and William Barta.

Dennis, Thomas, Gianni Moscon, and Ivan Sosa are all out of contract at Ineos, with the first two unlikely to contemplate moving away under almost any circumstances, while the rest of the out-of-contract riders are solid domestiques.

Cofidis’ transfer activity will rely heavily on how they handle the situation surrounding Elia Viviani. The sprinter has been unable to replicate his form from a couple of years ago and with his leadout man Fabio Sabatini also out of contract the team might decide to concentrate on Christophe Laporte and building a stronger core around Guillaume Martin in the Grand Tours.

Over at Groupama-FDJ, the team’s leaders in Thibaut Pinot, Arnaud Démare and David Gaudu are all on board beyond this year but the sprint lead-out train has a number of riders out of contract, while Benjamin Thomas is bound to attract attention.

Intermarché-Wanty-Gobert Matériaux had so little time to boost their line-up at the end of last year but were smart enough to only offer one-year deals to a number of signings. This will give the scope to improve their line-up, while Jumbo-Vimsa need to consider the future of George Bennett and a number of domestiques.

Team BikeExchange are still looking for a long-term sponsor and have Mikel Nieve and Esteban Chaves free at the end of the year, while Team Quebeka Assos once more find themselves relying too heavily on Giacomo Nizzolo. The Trek-Segafredo team will mull over their next move in relation to Nibali but they also have a number of stage racers and Classics riders up for renewal. Quinn Simmons is also out of contract.

Israel Start-Up Nation would be wise to retain the services of Dan Martin after his Vuelta performance from last year, but their core of homegrown riders are out of contract, along with Ben Hermans, Davide Cimolai, and Krists Neilands.