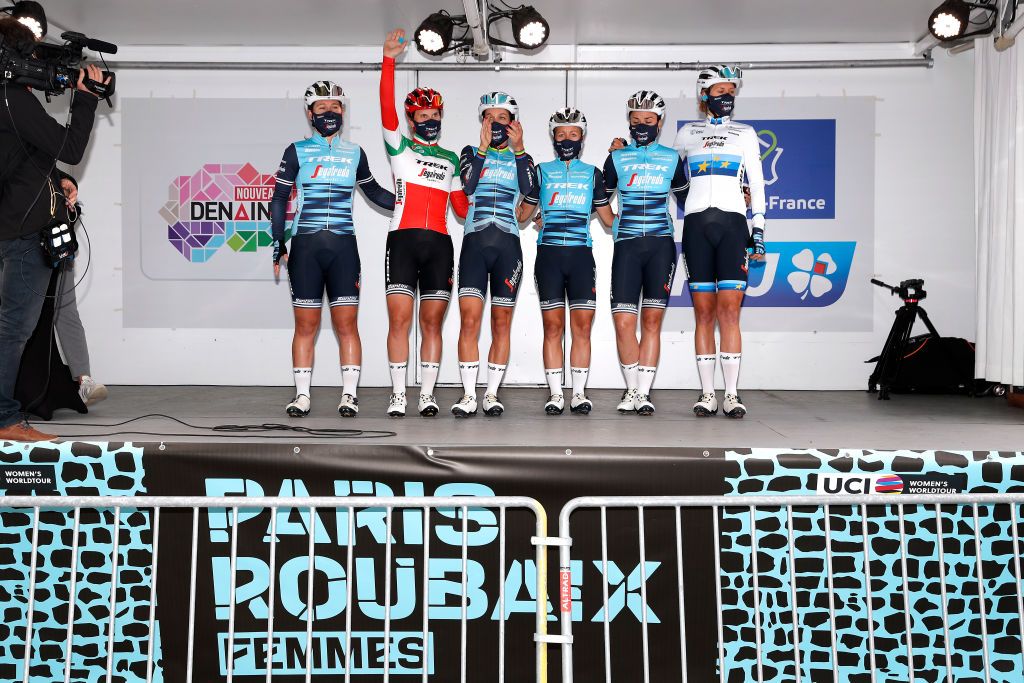 The discussion surrounding unequal prize money between women’s and men’s events in professional bike racing surfaced at Paris-Roubaix when it came to light that women’s race winner Lizzie Deignan received €1,535, just a fraction of the €30,000 that Sonny Colbrelli earned for winning the men’s race.

After Paris-Roubaix Femmes, Trek-Segafredo confirmed to Cycling News that they had pitched in the funds to make up for the massive discrepancy between the winner’s prize money payouts, later confirming they have been doing it during the 2021 season.

Trek-Segafredo have since confirmed to Cycling News that they had matched the prize money for all their riders who placed in the money earning spots – and they’ve been matching prize money payouts all season.

“Since the start of the 2021 season we have been matching the prize money for our female athletes at women’s road races to the money awarded in the equivalent men’s races. As some races do not have a direct equivalent, such as La Course and Madrid Challenge, we matched the prize money to a men’s event of similar stature,” a representative of Trek-Segafredo confirmed to Cycling News.

“This is the case for all riders who finish in prize money earning positions, not just the winner. The prize money is matched to the actual figure that the men receive, as this is often higher than the UCI-mandated level.”

The top 20 riders receive prize money and Trek-Segafredo had three riders placed among it, with Elisa Longo Borghini also standing on the podium alongside Deignan as she secured third while Audrey Cordon-Ragot rode into the Roubaix velodrome in eighth.

The total prize money for a Women’s WorldTour one-day race is currently set by the UCI at €7,005, with €1,535 awarded to the winner.

Increased payouts above the minimum for the men’s field also ran right through to 16th position, leaving a gap from €760 to €15,000 for Trek-Segafredo to fill for their third-placed Paris-Roubaix Femmes rider and between €265 to €1,300 for eighth.

Discussion over prize money inequality in cycling has come to the forefront several times this year beginning at Omloop Het Nieuwsblad where the winner of the women’s race Anna van der Breggen earned €930 compared to the €16,000 that Davide Ballerini earned for winning the men’s race.

However, Flanders Classics CEO Tomas Van Den Spiegel defended the organisation, stating that the higher priority was placed on first-ever live coverage of the women’s race and that it would work toward equal prize money in 2023.

It came to a head again ahead of Strade Bianche, which hosts both men’s and women’s WorldTour events in Siene, whereby a crowdfunding campaign was launched in an attempt to equalise prize money.

“We believe that equal prize money is an important step to create a better environment for all athletes. We hope that this action will inspire organizers and sponsors to reward all athletes equally for their achievements.”

In addition, the team announced last September that their rider, Abi Van Twisk, had put her professional cycling career on hold as she prepared to welcome her first child in February this year. The British rider was in her second year of a two-year contract with the American outfit and effectively took maternity leave starting in February last year and received full pay to the end of her contract in December, above what the UCI mandates in its maternity leave clause in standard contracts.