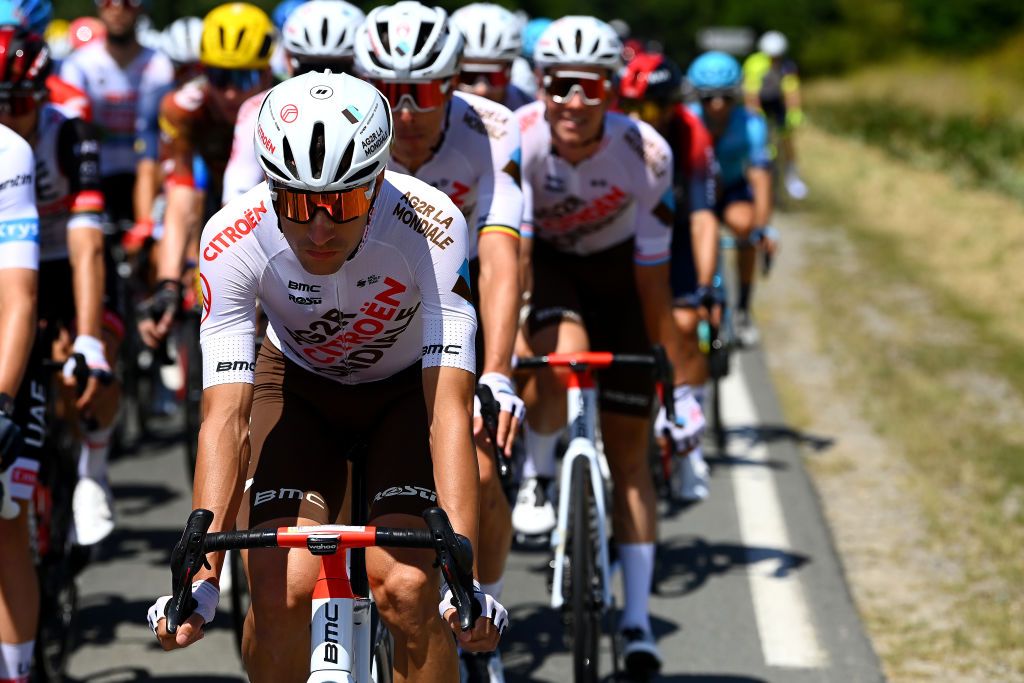 Bouchard returned a positive antigen test taken at the team hotel following the stage to La Super Planche des Belles Filles and was immediately isolated from the rest of the riders and staff before leaving the race.

AG2R Citroën, who carry out antigen tests every three days in addition to mandatory testing rounds carried out by Tour organisers ASO, confirmed that the rest of the team returned negative tests on Thursday evening and Friday morning.

“During the stage, I did not feel well,” Bouchard said in a statement released by the team. “It’s a huge disappointment because we were just getting to my favourite terrain, the mountains.

“It was my first Tour de France and it’s sad to end it like this. I wish my teammates a lot of success and I send them all my strength for the rest of the Tour de France.”

“Since the start, the AG2R Citroën team has carried out antigenic tests every three days in addition to the tests carried out by the organisers of the Tour de France. The entire team – riders and staff – underwent an antigen test on Thursday evening or Friday morning, which resulted in negative tests for the whole group.”

“We have implemented a very strict protocol for months to guarantee the health of our riders and our management,” added team manager Vincent Lavenu. “I’m sad for Geoffrey, who we were counting on for the next few days. The Tour is not over, and we still hope to be at the front of the stages when we arrive in the mountains.”

Laengen fell foul in a similar fashion, initially showing symptoms on Friday evening before having a confirmed positive with a PCR test on Saturday morning ahead of stage 8.

“As per protocol, for his, the team, and the peloton’s safety, he will be withdrawn from the race.”

Bouchard and Laengen’s departure are the fifth and sixth of the race, following Jack Haig (Bahrain Victorious), Daniel Oss (TotalEnergies) and Michael Gogl (Alpecin-Deceuninck), who crashed out on the cobbled stage 5, as well as Alex Kirsch (Trek-Segafredo), who left the race on stage 6.

Before the Tour de France began last Friday, several riders were late scratches from the start list due to COVID-19. Matteo Trentin (UAE Team Emirates), Samuele Battistella (Astana Qazaqstan) and Tim Declercq (QuickStep-AlphaVinyl) tested positive for the virus in the week before the start, while Israel-Premier Tech riders Daryl Impey and Omer Goldstein had to miss the Tour as close contacts.

Jumbo-Visma directeur sportif Merijn Zeeman and a slew of QuickStep staff – including DS Tom Steels –  also didn’t make the race after testing positive, though all are expected to head to France after returning negative tests.

Ahead of the Tour, the UCI announced updated COVID-19 guidelines in reaction to the renewed spread of the virus across Europe, including frequent testing during Grand Tours and a rule change that meant teams could stay in the race after multiple positive tests.

“Strongly recommended measures” introduced by the UCI include daily antigen tests for all riders and staff and, during the event, antigen tests to be carried out “if possible, daily but at least every two or three days” for team members, UCI commissaires, UCI technical delegates, and anti-doping control personnel.

Monday’s rest day will bring the next round of testing at the race, with all team members – plus all UCI staff listed above – set to undergo antigen tests.