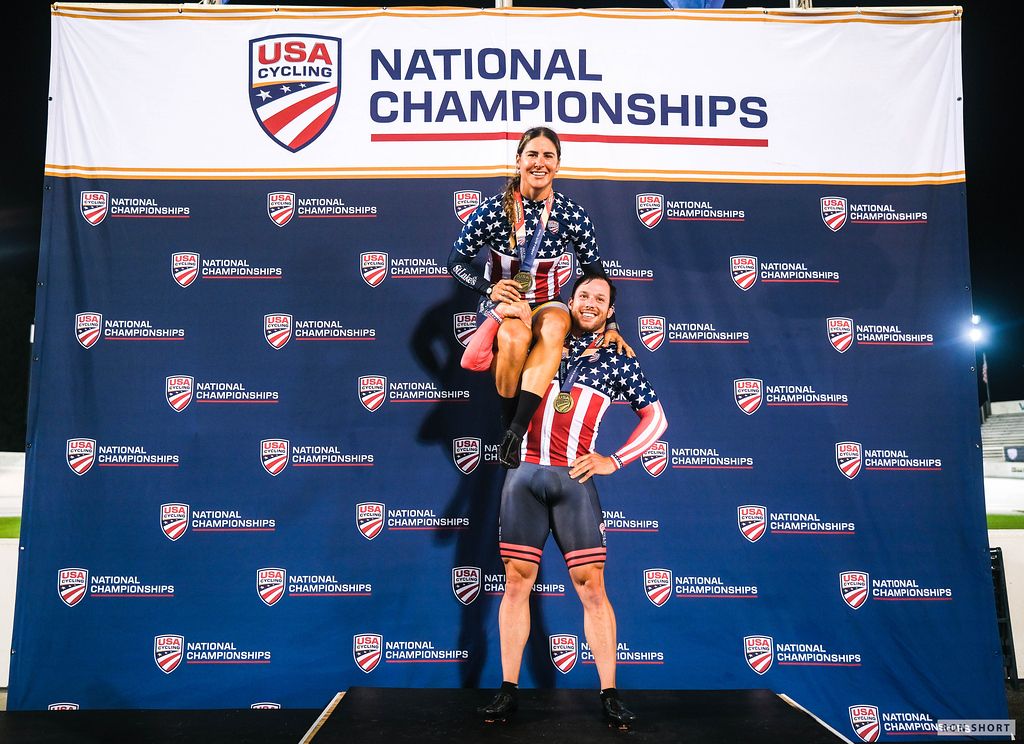 The familiar ring to sound a bell lap was replaced Saturday with wedding chimes as US track national champions Mandy Marquardt and James Alvord III married after a two-year engagement. The celebration of matrimony was set to move this week from Glen Spey, NY, to Lima, Peru, where both will compete for USA Cycling in the Pan American Track Cycling Championships, August 10-14.

Both riders had just completed multiple events at the USA Cycling Junior and Elite Track National Championships, held July 27-31 in Breinigsville at the Valley Preferred Cycling Center, their home track. Marquardt raised her career total of national titles to 25 and Alvord increased his career tally to seven.

Alvord repeated from his 2021 performances with three more national titles. Last week he won the elite men’s 1000m time trial, sprint and the team sprint, alongside Andrew Chu and Barak Pipkins in the final, and Nicholas Roberts in the qualification rounds.

“Never would I have imagined to be kitted up for my honeymoon, but it’s special to be going and to be competing for Team USA together. All good things are happening at once,”  Marquardt said a few days before the exchange of vows.

“I wasn’t planning to be going to Pan American Track Cycling Championships this year, but since it’s the first event that kicks off the 2022-2024 Olympic qualification cycle, I wasn’t going to miss it.”

The two riders met at the velodrome near Trexlertown in 2010, and they both had aced for the same team, Edge Cycling Team. As a teenager Marquardt learned she had type I diabetes, but it never slowed her down. Now 31 and part of Team Novo Nordisk Pro Cycling, Marquardt is focused on earning a spot on Team USA for the 2026 Olympic Games in Paris.

Marquardt fell just short of qualifications for the 2020 Olympic Games, but not without extra efforts from her financé. Alvord quit his full-time job to assist Marquardt with preparations and competitions for the Track World Championships in Berlin in 2020. That was the end of February, and the COVID-19 pandemic struck two weeks later. The wedding plans were put on hold, and also Marquardt’s Olympic dream.

“Racing and training with Mandy has given me so many amazing memories and experiences. On and off the bikes we push each other to be the best versions of ourselves, we love, we learn, we grow (that’s the real win). It is truly something special to see how far we have come, not only as racers but as individuals,” Alvord said.

“The opportunity alone of getting to race together, especially at our home track, is invaluable. Defending national titles side by side, leaves me smiling and a little speechless. We have both been selected to compete at the Pan American Track Cycling Championship and I am looking forward to representing Team USA alongside of my wife.”

While Marquardt has earned seven medals in Pan American Championship races since 2017 – one gold, two silver and four bronze – Alvord will make his debut at these Pan Ams at the age of 32. He is part of the Men’s Sprint team that includes Evan Boone, Josh Hartman, Geneway Tang and Dalton Walters. Marquardt’s teammates on the Women’s Sprint team are Keely Ainslie, Kayla Hankins and McKenna McKee.

The first couple of US track are expected to make their first appearances on the track in Lima in team sprint rounds on Wednesday.