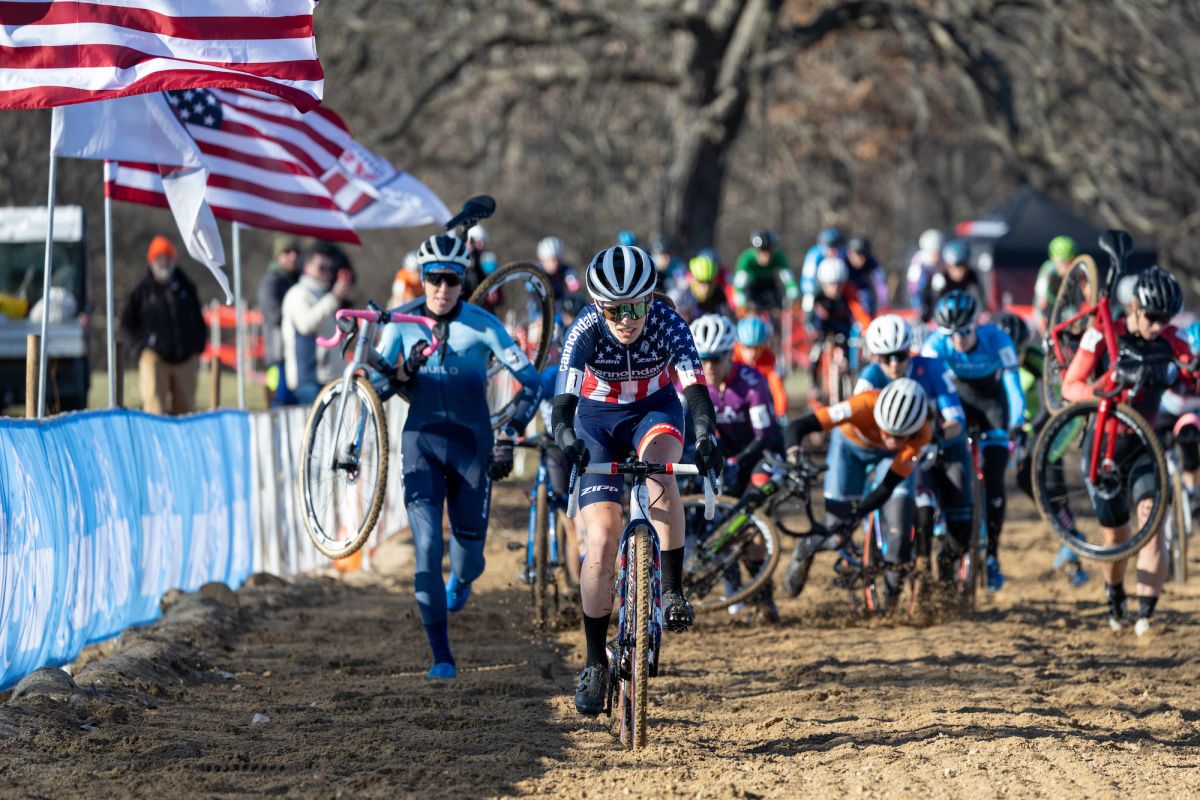 USA Cycling has faced criticism for not taking enough action in preventing an anti-trans group from protesting, shouting and holding signs opposing transgender participation at the USA Cycling National Cyclo-cross Championships held in DuPage County, Illinois, in the Chicago area on Sunday. Trans rights supporters have expressed concern that the sport governing body did not facilitate a safe and inclusive environment for trans women at its own flagship event.

“There is an active cycling scene in Chicago with a vibrant queer, transgender and BIPOC presence, and these local people were coming up to me and asking what was happening and why wasn’t anyone doing anything about it. There were a lot of locals there, children and young kids, transgender and non-binary kids, and their parents and families out, at the race. They are mortified and so hurt,” said Molly Cameron, a transgender cyclist and founder of RIDE aimed at creating a more inclusive bike industry and sport.

“These are coordinated and targeted attacks. They only came out for the women’s race and then they left. The issue here is that these actions are impacting those athletes that are racing, it is impacting the entire scene and damaging the entire community.”

The anti-trans protesters represented a group called “Save Women’s Sport”, and according to its Twitter bio, is a “coalition that seeks to preserve biology-based eligibility standards for participation in female sports.” The group stated in a post on its social media platform that representatives from across the US had gathered for demonstrations in Chicago on the weekend to “respectfully raise awareness of a male racing in a women’s national championships.”

Cameron explained to Cycling News that she witnessed the group target the transgender athletes who were competing in the elite women’s race, and using a flag and other signage to disrupt their races at three locations along the circuit. CyclingTips reported that representatives of the anti-trans group held up signs that read “Say no to males competing as females” and “woman = adult human female.”

“The women were at the bottom of the run-up holding up ‘Save Women’s Sports’ banners and they were targeting the women who are known transgender athletes. They were getting really loud and agro when these athletes were [racing] by, and they were on a part of the course where riders would pass by a few times, because it was a section of the course that looped back on itself. They had signs and they were putting them in [the athletes’] faces and shouting. There was also a group standing at a more distant part of the course with a large flag that they were waving onto the course, in addition to signage, and they were actively trying to disrupt and target individuals that were racing,” Cameron explained.

Cycling News has reached out to Save Women’s Sport for comment.

Trans rights supporters have taken to social media since the incident to speak out against anti-trans groups and many within the cycling community have questioned why USA Cycling did not do more to prevent the anti-trans demonstration at the US Cyclo-cross National Championships venue on Sunday.

Cameron confirmed that she notified members of USA Cycling onsite about the incident as it happened and that two members of the organization were sent to stand beside the protesters to “prevent an incident.”

“My phone started blowing up as this was happening and people were asking me what they should do to report the protestors and how to get them removed from the venue. I headed over there to bear witness to what was happening. I asked the woman to run over and tell a member of USA Cycling what was happening. At the same time I texted [USA Cycling leadership members], most of the members of the board were on site at that moment, to let them know that this hate group was on site and that they were actively intimidating and harassing the athletes that were racing. USAC responded via text to say that Chuck [Hodge] and Tara McCarthy ‘went over to stand next to them to prevent an incident’. I responded to say that ‘this is the incident, are you asking them to leave?’ and I got no response,” Cameron said.

“It was a private, paid-entry event and every person there, unless they were VIP or were given a pass, everyone had to pay to get in. The race promoter allowing a hate group to come in and protest, as long as they were not starting a physical fight … for all the discussion on diversity and inclusion, I don’t understand how they cannot see that they are not building a community. This is a long conversation but how do they not see how damaging this is to cycling’s credibility?”

In a statement written to Cycling News regarding the incident, USA Cycling confirmed that they were made aware of the anti-trans protest during the elite women’s competition and that they took action to ensure the demonstration did not interfere with those who were racing.

“During Sunday’s Elite Women’s race at the 2021 USA Cycling Cyclo-cross National Championships, a group of spectators held up Save Women’s Sports signage along the course. USA Cycling staff were alerted to their presence and posted staff members around their location to ensure that the group didn’t interfere with the race. The group left the venue at the conclusion of the race,” USA Cycling wrote.

“Since 2017, USA Cycling has championed transgender participation in the sport of cycling by adopting a tiered policy to ensure safe, fair, and inclusive competition. This policy addresses racing participation for transgender athletes, allowing for riders at the grassroots level to participate in the gender they identify with while following guidance from the Union Cycliste Internationale (UCI) and the International Olympic Committee (IOC) on participation at the national and international level.

“USA Cycling recognizes that its policies do not provide oversight regarding protests or demonstrations at its events. Creating and evaluating our policies is a high priority in the coming weeks, and the organization is working diligently to address the concerns of the cycling community.”

Cycling News asked USA Cycling if they could have requested the anti-trans protesters leave the event, however, they did not respond.

Transgender women are permitted to compete in sanctioned events if the athlete declares that her gender identity is female, demonstrates a total testosterone level serum has been below 5 mol/L for a period of at least 12 months, and remain below 5 nmol/L throughout the period of desired eligibility to compete in the female category, according to USA Cycling’s policy of diversity and inclusion, as set forth in the USA Cycling Code of Conduct and Bylaws.

“Trans women are women and that is fundamental to any conversation that we will be having. The IOC, UCI language and rules now specify that anything that can be done to reduce harm and increase access, and acknowledge that marginalized communities, intersex, non-binary, transgender people have so many barriers to entry into all sport. We need to figure out how to acknowledge this, and this is the first thing we should be thinking about. I want to find common ground. I’m always looking for solutions and to be a positive catalyst for change,” Cameron said.

“As a USA Cycling member, the MTB Coordinator for the Eastern Collegiate Cycling Conference, and a USAC Official, I would like to express my outrage at the lack of response, and implicit allowance, of an anti-transgender hate group at USA Cycling’s Cyclo-cross National Championships on Sunday, December 12, 2021 in Wheaton, Illinois,” Leonard wrote.

“I feel ashamed wearing my USA Cycling officials clothing and to be a visible member of this organization. Myself and others are less safe at sanctioned events due to your continued refusal to act upon repeated instances of the Save Women’s Sport hate group participating and fundraising on the backs of USA Cycling events, as well as continued instances of transphobic behavior online by athletes, promoters, and even officials.

“USA Cycling has now allowed this hate group to harass, make others uncomfortable, and attempt to gain support for their mission of exclusion at two seperate nationals – first at Marathon Nationals, and now at Cyclo-cross Nationals.”

USA Cycling’s President and CEO Rob DeMartini resigned this this week and he was replaced by board chairperson Brendan Quirk. During his time at USA Cycling, DeMartini formed a Diversity, Equity and Inclusion committee in January 2020.

However, he was involved in controversy related to the state of Arkansas and its legislature’s stance on anti-transgender laws that many see as an attack on the LGBTQ community. The state will host the UCI Cyclo-cross World Championships scheduled for January 29-30 in Fayetteville.