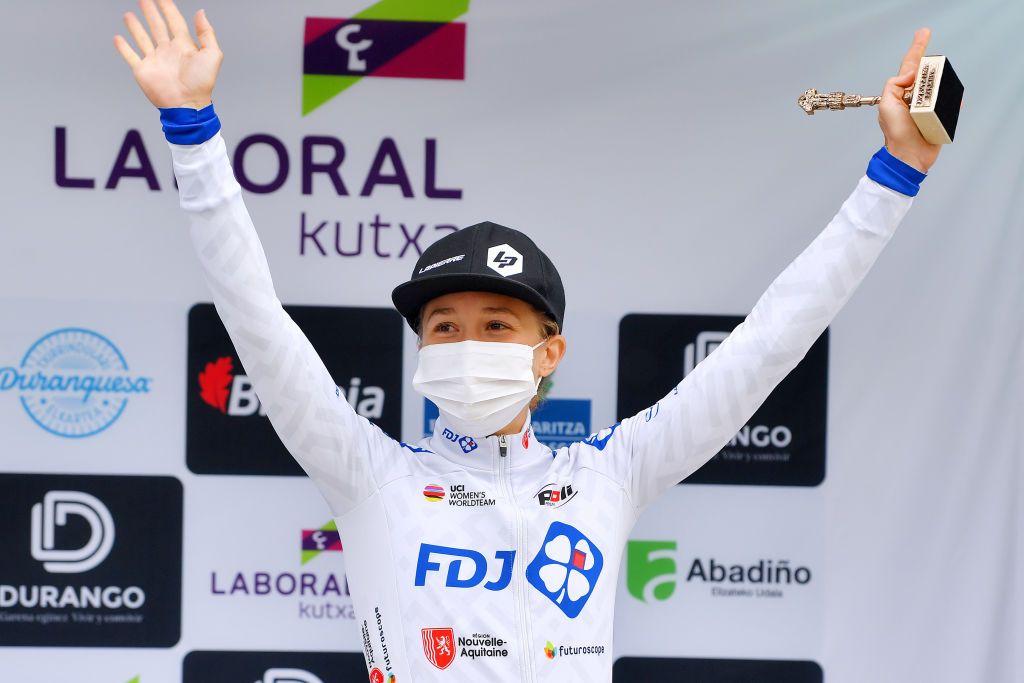 Cecilie Uttrup Ludwig (FDJ Nouvelle-Aquitaine Futuroscope) animated the Durango-Durango Emakumeen Saria with a powerful late-race attack that saw her start the final climb of the Goiuria Gaina at the front of the race in pursuit of victory.

On those final pitches, however, she was caught and passed by eventual winner Anna van der Breggen (Team SD Worx) and runner-up Annemiek van Vleuten (Movistar Team), but Uttrup Ludwig fought hard on the descent, and reconnected with the leading pair before the final sprint, where she mustered up enough power to finish third in Durango.

The last time Uttrup Ludwig had been in such a situation was in 2018’s La Course by Le Tour de France. Like back then, Van der Breggen and Van Vleuten caught and passed her on the final climb, leaving her with third place – and the 25-year-old admitted to shedding tears of joy after the race.

“After La Course, I cried with joy, and I did the same today. I am so, so proud of this result and the team. It was a great race, and we gave it everything we had,” said Uttrup Ludwig after her podium finish in Durango.

Unlike at La Course three years ago, the time gap on the descent was smaller this time, and the Danish climber chased hard in the downhill and returned to the front just before Van der Breggen and Van Vleuten started their sprint.

“I threw myself into that descent on the wet roads. All I could think of was catching the two in front, hoping they would look at each other and not go all-in. I could see them all the time, the gap was just 10 seconds, then it got a bit bigger,” Uttrup Ludwig said.

“In the end, I caught them on the uphill on the final kilometre and thought, why not just go past? But they moved to the right before the corner at the same moment, and then they had more power left in the sprint.”

Uttrup Ludwig’s move in the final had been set up by teamwork earlier in the race when the peloton split with about 50km to go and Van der Breggen, Van Vleuten, and Katarzyna Niewiadoma (Canyon-SRAM), among others, were caught behind.

“We had all five FDJ riders in the first group, so then it was simply, ‘girls, you all ride’. It was a great effort by the team, really well done,” said Uttrup Ludwig. “I wanted to get a lead on the others the first time up the climb. I attacked, but did not get away, attacked again, and then I was alone.”

After nearly 10 kilometres off the front on her own, Uttrup Ludwig was finally caught and dropped by Van der Breggen and Van Vleuten on one of the steepest parts of the second and final climb over Goiuria Gaina with 10.5 km to go.

“I had expected them to catch me eventually, to be honest. It was a really steep climb. But I tried to stay close to them, and they were never far. When [Paulien] Rooijakkers came up to me, it was a bit strange – I wanted to work with her, we had to get to the other two,” Uttrup Ludwig said about the Liv Racing rider. “But it did not work, and I dropped her again over the top.”