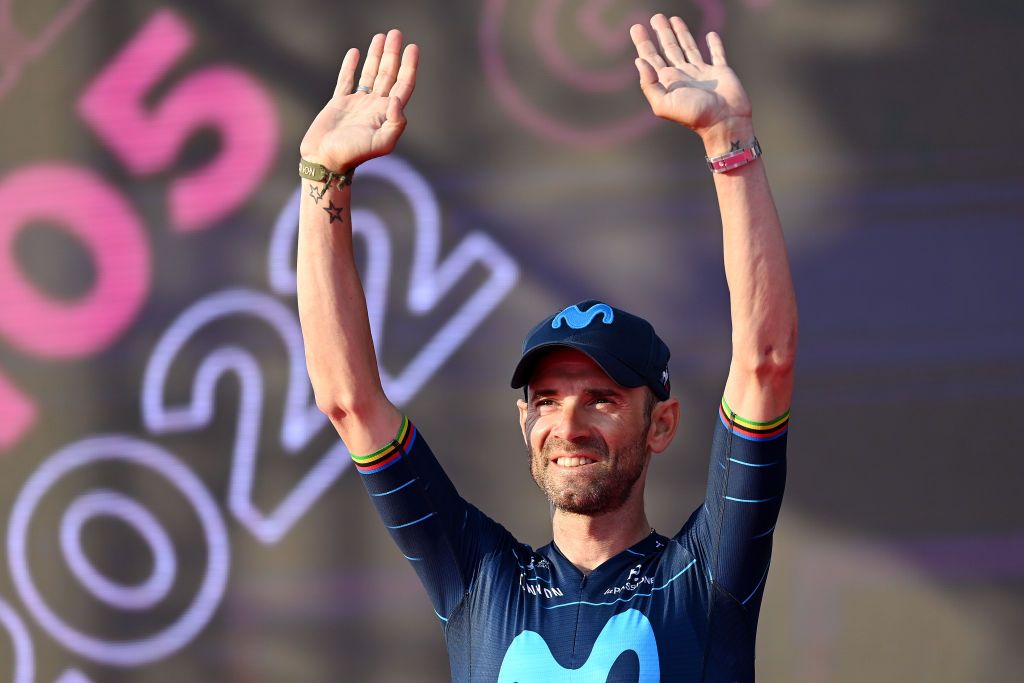 Strange but true: in a career now entering its fourth decade and containing no fewer than 30 Grand Tours, Alejandro Valverde has only once taken part in the Giro d’Italia. But with less than five months of his rollercoaster career left to run, the Spaniard is on the point of doubling that tally.

On Friday, the 42-year-old will start the Giro again six years after his previous appearance in 2016. That year, he completed his ‘set’ of Grand Tour podium finishes, as well as netting a stage when he out-duelled Giro leader Steven Kruijswijk at Andalo. The Dutchman then ended up off the podium in a spectacularly topsy turvy finale but Valverde plodded steadily on to third place in Turin – although, unlike Kruijswijk, he has never returned to the Giro afterwards. Until now.

What Valverde can achieve in a Grand Tour at an age when other racers have long since opted to watch Giros from the comfort of their sofa remains very much an incognito. It’s tempting to say he is too long in the tooth until you remember this is a rider who just nabbed his ninth podium place in La Flèche Wallonne and a top-10 finish in Liège-Bastogne-Liège, as well as claiming third in Strade Bianche and winning El Gran Camiño this February.

Until last weekend when Ivan Sosa claimed a double victory in the Vuelta Asturias, Valverde was Movistar’s only men’s rider (the women’s team is a very different story) to have actually won a race this season. Even at 42, it seems like anything can happen with Valverde and sometimes does.

It was notable at Wednesday’s press conference that while Valverde all but ruled himself out of the battle for GC, which is Sosa’s target, the Spaniard did not do so completely. He said, however, that picking up a second Giro stage en route to a final curtain call at the Vuelta in September would be a more than satisfying outcome.

“For me a return to the Giro is important, I’ve only done it once and I wanted to come back again this year, my last,” Valverde said.

“The overall would be very hard, both because of my age and because of the three weeks of racing, where having to stay on top of things for so long would be a bit hard. But a stage win – that’d make me very, very happy.”

Valverde’s chances of a spell in the pink leader’s jersey are not entirely non-existent in the first week, given stage 1 on Friday has a tricky uphill finish but he seemed keen to play down any sense of expectation about his chances for Friday’s tough first stage.

“It’s not for a true sprinter and we’ll go see the finish to check it out. But everybody’s fresh at the start of a race,” he insisted, “and it’s a great stage for [Mathieu] Van der Poel. There are three weeks ahead of us to try for that stage win and I don’t need pressure. Any of them would be fine. Even” – he joked – “the time trial on the second day. But if the win happens on the first day then so much the better.”

A pro since 2002, Valverde has been around for so long that it could well be more difficult than usual to accept he has gone. Indeed one Movistar sports director Max Sciandri told La Gazzetta dello Sport‘s correspondent Ciro Scognamiglio this morning that “you never know with a champion like Alejandro whether he could stretch out his career even a little longer.”

“So let’s start this Giro, then I’ll go onto the Vuelta, and then if all goes well I’ll get to the Worlds. But I’ll call it a day at Il Lombardia, it’d be great to finish my career there, it’s a race I like a lot.”

The mystery of why Valverde never raced the Giro more in a career which also includes 15 Vueltas and 14 Tours was not exactly a mystery, he insisted.

“My racing calendar has always been very well structured,” he claimed a shade defensively. “But I focussed a lot on the Ardennes Classics over the years. To keep that form all the way through to the Giro and then onto the Tour and Vuelta would have been difficult.”

“But it’s true that I did like the Giro when I did it. And I’m glad to be back here now.”