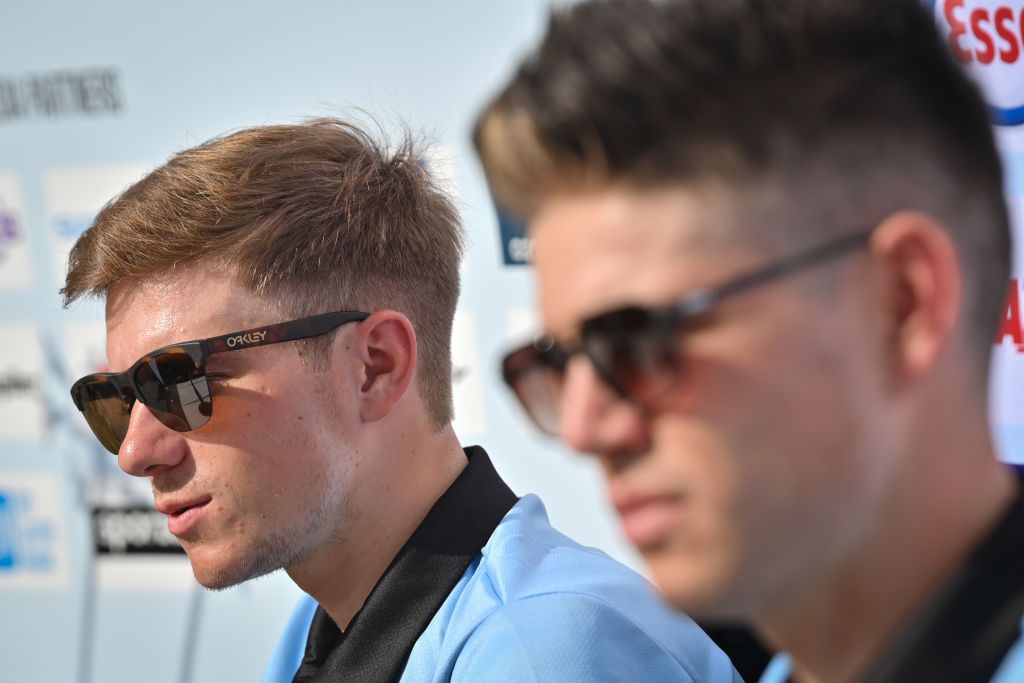 Wout Van Aert and Remco Evenepoel made it clear they are aiming for the world title and medals in the men’s time trial event that kicks-off the UCI Road World Championships in Flanders on Sunday.

Speaking during an outdoor press conference as the tension and expectations rose in Belgium, the two appeared confident and ready to race.

Van Aert had arrived a little earlier on Friday, personally bringing his time trial bikes to the Belgian national team hotel near Bruges. Evenepoel arrived on Thursday afternoon and quickly rode the 43.3km course between Knokke-Heist on the coast and the finish in Bruges.

The flat and fast course is expected to be a test of pure time trial ability, with the long straight roads and crosswinds added factors.

Van Aert and Evenepoel are expected to battle with 2020 world champion Filippo Ganna of Italy and new European champion Stefan Küng of Switzerland for the world title. Evenepoel finished third in Trento last week, while Van Aert completed his preparation for the World Championships by winning four stages and the overall classification at the Tour of Britain.

Van Aert is also targeting the road race and is designated team leader for Belgium.

“Maybe the road race is a little bit more important. I prepared myself more specifically for the road race. It’s important to make choices every now and then,” van Aert admitted.

“But of course I am in very good shape, so I will also start on Sunday with first place in mind. However, I am slightly more prepared for (the road race in) Leuven than for the time trial. But becoming world time trial champion is on my list. I was already able to win this year in the Tour, the World Championships is even more prestigious.”

Perhaps sending a message to his younger teammate, Van Aert warned against being distracted by the emotions of racing in front of a home Flemish crowd.

“We start on the coast and there will be a lot of people there, so it is dangerous to get carried away,” he said.

“But we both have enough experience and hopefully won’t make that mistake. In the final it can only be an advantage that there are a lot of people. I’m really looking forward to giving everything and hopefully a lot of people will come to cheer us on. It will definitely be an unforgettable day.”

Evenepoel admitted he will have little time to enjoy racing in front of a patriotic Flemish crowd during the time trial.

“There is not much to enjoy in a time trial,” he said. “Of course, it is always special to race in our own country. That makes a World Championships even more important. It will be a unique experience.

“It is possible to be too enthusiastic. That was the case with me in Trento, so it will be important to drive a smart time trial.

“The course is flat, straight and 44 km into the wind,” Evenepoel said when asked to describe the Knokke-Heist to Bruges course.

“You have to ride at a very fast pace from start to finish and make sure you don’t explode, in order to accelerate even more at the end. It’s a nice course, mentally it’s going to be a difficult time trial because it’s straight all the time and you can’t rest your legs.

“Dealing with the wind will be difficult. It will be a matter of accepting how it blows. It’s nice that the course is a bit longer than at the European Championships. The men who can drive very fast for a long time will be happy with this course.”

Evenepoel has to stay loyal to the Belgian team plan for the road race after reportedly going rogue and not follow the pre-planned tactics during the Olympic road race. He has accepted to work for Van Aert in the road race and so the time trial represents his best shot for a world title.

“We are both very motivated for Sunday,” Evenepoel said. “I have already said enough times that I want to help Wout as best as possible in the road race. Hopefully I can just drop him off at the finish. I’m going to give the maximum twice.”