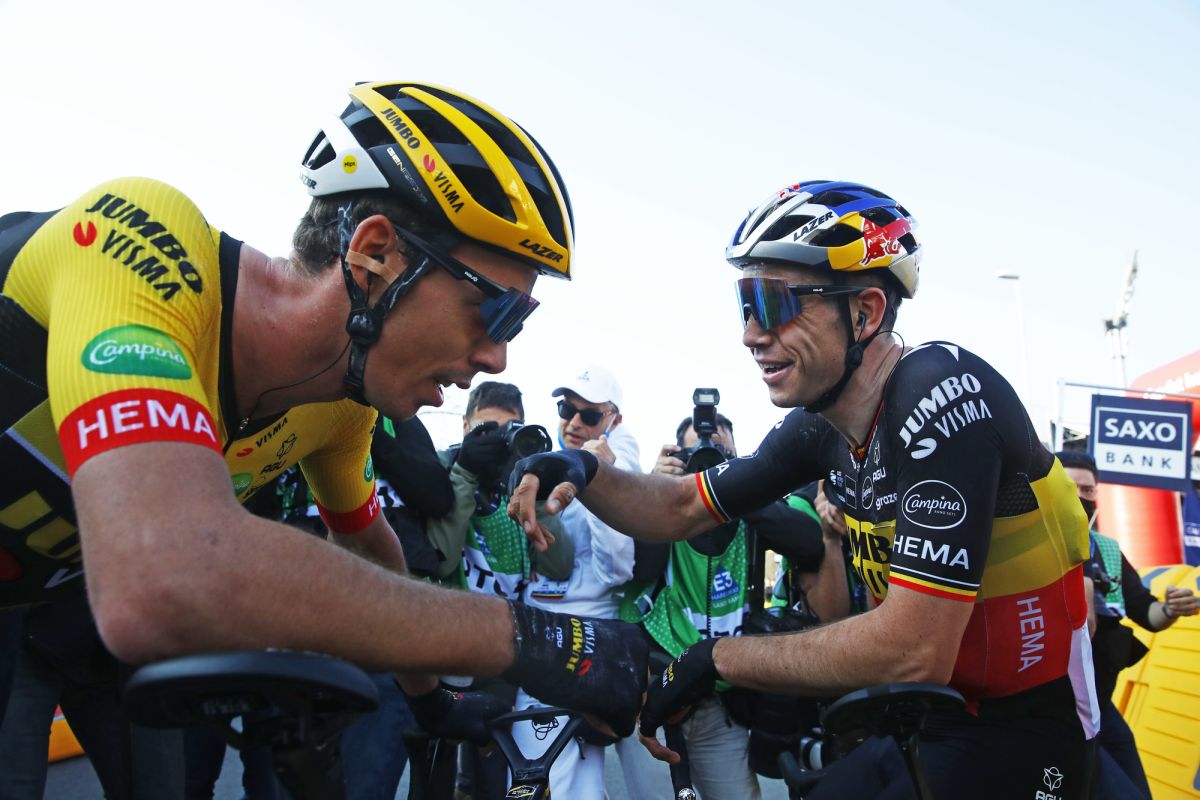 Dutch squad Jumbo-Visma have been one of the teams of the spring Classics so far, with Wout van Aert, Christophe Laporte, and Tiesj Benoot playing starring roles in race after race since the Opening Weekend.

Two of the trio will line up for Paris-Roubaix on Sunday as Van Aert makes his comeback from a COVID-19 infection and Laporte returns to the race he finished sixth at last year.

Dutch fastman Mike Teunissen and Belgian Nathan Van Hooydonck also make up what looks like one of the strongest teams set to start in Compiègne – should Van Aert be in good form.

Star man Van Aert didn’t make the team’s recon ride of the final 100km of the Paris-Roubaix course on Thursday, though Laporte was present and gave his perspective on the Belgian champion’s shape ahead of the Queen of the Classics.

“I will see Wout tomorrow,” Laporte told Cycling News. “I think if he does the race then he is well. I think that he did some good training also and we’ll on Sunday how he feels. I think he feels he can be very good on Sunday.

“It was a good spring for me, and for the team also. The last one comes on Sunday, and we want to finish this part of the season well. We have a very good team here and I think we can do a nice race in Roubaix.”

Laporte’s sixth place last autumn was his best in six appearances at the race, the Frenchman riding well in dire conditions during the famous wet edition of the race.

He’s aiming for more this time around and said that the race will be easier without the rain, but noted that Paris-Roubaix is never easy, even in the bone-dry conditions forecast for the weekend.

“Last year I was sixth and for sure, we want to do better on Sunday. I’m sure it will be a hard race and a hard day. It will be nice weather, but we will see,” he said.

Jumbo-Visma are set to be among the strongest lineups at the race, but they will be set for a challenge against another squad which has risen to the top of the Classics pile in recent weeks – Ineos Grenadiers.

The British team have been firing on all cylinders recently, with Ben Turner flying as a super-domestique, Michał Kwiatkowski winning Amstel Gold Race, and teenager Magnus Sheffield triumphing at Brabantse Pijl.

They’ll also boast Filippo Ganna, Luke Rowe and Dylan Van Baarle among their number, and – along with a QuickStep-AlphaVinyl team which has been beset by illness – look to be the biggest challengers to Jumbo-Visma. Laporte said that Paris-Roubaix is a different prospect to the races the British squad has excelled at, though.

“It’s not the same race, eh?” he said. “It’s not the same like Brabantse Pijl or Amstel Gold Race. And I think we have always been like that in the recent Flanders races, with several guys in the front. It’s really important to be a minimum of two riders in the front in the last 15 kilometres so that you can play with that.

“And then Roubaix can be very tactical sometimes. We can win the race between the sectors. For that we need to have a minimum of two or three riders in the front. Then, with one up ahead, you don’t need to push behind, and it can be good for everyone.”