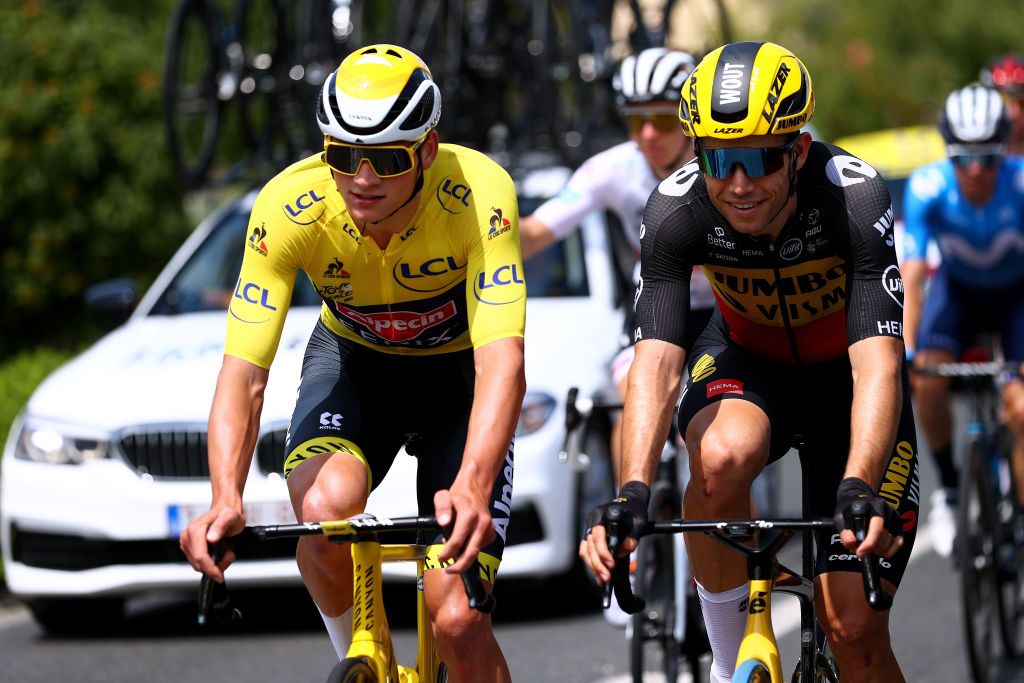 After the disappointment of missing out on the stage win and the yellow jersey in Wednesday’s stage 5 time trial at the Tour de France, Wout van Aert (Jumbo-Visma) had targeted a return to sprinting on stage 6.

Ultimately, however, having saved himself on the previous two sprint days, the Jumbo-Visma all-rounder was again disappointed in Châteauroux, taking eighth place as Mark Cavendish (Deceuninck-QuickStep) celebrated his second stage win of the Tour.

The Belgian, who won two stages at last year’s race, said a misjudgement in the finishing straight was to blame for him being out of contention in the final.

“It was quite a fast finish,” Van Aert said after the stage. “I though the last straight would be really super high speed and it would be quite difficult to move up places. That’s why I took my own line a little bit and lost Mike Teunissen, who was supposed to bring me up.

“When I saw after that it was so fast it was maybe better to stay with Mike and move up together. A little mistake by me and then I got boxed in. When I started my sprint, it was already over.

“I tried to find my own way. At first, I was in the wind too much and in the end I had to brake because of a bump. I was already 10 bike lengths behind when I had to start my sprint.”

Friday’s punchy 249-kilometre stage from Vierzon to Le Creusot, with its four classified climbs in the final 90 kilometres, could be another chance to try and win.

However, he ruled out a bid on the yellow jersey, as he is 30 seconds down on race leader Mathieu van der Poel (Alpecin-Fenix), who should also be a contender on the stage.

“I think it’s a lot hillier,” he said. “I think for me the yellow jersey isn’t possible anymore. The two guys in front of me both have the goal to stay there and not lose time. I don’t really believe in this and would like to focus on stage wins.

“I feel quite good, but it’s just a small margin between this result and wins. I’m still looking for it and I’ll keep chasing.

“I still believe in it,” he added, referring to taking a stage win at this Tour de France. “I’m not too far from it. I’m just good but not super yet.”