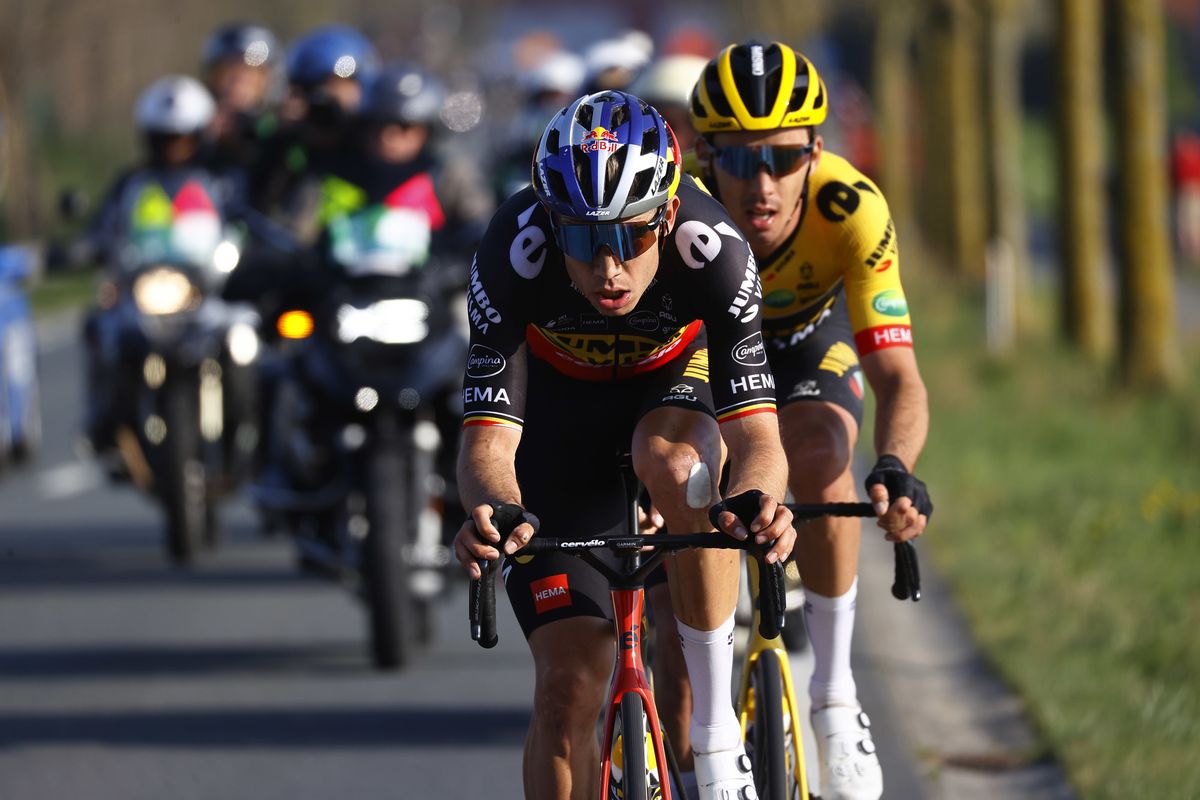 Wout van Aert whipped out the old cliché in his press conference as winner of E3 Saxo Bank Classic. “It never gets easier,” he said. “You just go faster.”

In Friday’s Tour of Flanders warm-up act, he went far faster than anyone else. In fact, the only rider capable of following him in the final 40km was his own teammate Christophe Laporte, and the only reason he survived was because Van Aert decided to wait for him.

It was a staggering demonstration of superiority as the Belgian champion opened the race himself on the Taaienberg with 80km to go and then put it out of sight on the Paterberg with 40km to go. Laporte was along for the ride, and the pair of them rolled into Harelbeke arm-in-arm more than 90 seconds ahead of anyone else.

“It would be stupid if I said it was easy,” Van Aert said. “You still need to perform on the highest level. Of course, we had a big gap in the end, but we really had to fight until the moment the group behind started hesitating, so we forced that situation ourselves.

“We definitely do not say that this was easy, but of course the way of winning was really special.”

If it looked easy, then Van Aert had the grace to place the credit with his team. Having cut short his cyclo-cross campaign in order to hit his peak for the Flemish spring, he looks as strong as he ever has, but he’s also better supported than ever.

In previous years, he has operated almost as a lone ranger in the cobbled Classics, forced to close gaps and fix problems on his own – a waste of the power that might have won him races.

However, the signings of Laporte and Tiesj Benoot – plus the comeback of Mike Teunissen and the improvement of Nathan Van Hooydonck – have taken Jumbo-Visma to QuickStep dimensions and even beyond.

On Friday, Van Hooydonck laid the groundwork for the Taaienberg attack, before Laporte and Benoot made it three in what was a selection of seven. Teunissen joined the fray on the Eikenberg to make it four in 16, before Van Aert and Laporte sailed clear on the Paterberg.

“Before, I was quite a lot in the situation where I was in the front group like that with only myself. Today, we could always play he game how we wanted,” Van Aert said.

“It starts with belief. We wanted to be all together in front on the Taaienberg. Last year we saw what QuickStep did there, and sometimes it’s better to try copy a good tactic than try something new that doesn’t make sense. We wanted to force something there, but it’s only possible if everyone believes in it and commits 100 per cent.

“I think we tired the others by attacking a lot, especially with Tiesj. Me and Christophe could save ourselves for the Paterberg where the final really starts. That’s why our attack was really good. It makes a big difference to when you’re already solving problems 40km before. Now I was really without stress. It definitely feels comfortable to have so many strong teammates behind me.”

Deciding who would win

As Van Aert and Laporte ticked off the final four climbs and took their lead out to two minutes on the run-in to Harelbeke, the suspense quickly drained out of the race. The winner was still to be decided, but it was Jumbo-Visma’s decision to make.

Whereas Laporte had been handed the honours in a strikingly similar recent situation at Paris-Nice, this time it was Van Aert who was given he green light to nudge his front wheel ahead as they crossed the line arm-in-arm.

“Quite far out, Christophe himself had the idea to give me this victory. I think you saw a few weeks ago we did the opposite in Paris-Nice. I really have to tank him. We’re only fresh teammates but we already understand each other so good,” Van Aert said.

“It would also be strange if we sprinted for it. This was definitely the most beautiful to finish this team effort.”

Besides, whereas Laporte had ripped the race up himself and was on home soil at Paris-Nice, this time the same was true of Van Aert. Given he started to drop Laporte on the Oude Kwaremont, the following climb from the Paterberg, it was perhaps only fitting the spoils went to the strongest.

“I had to pace myself a little to get Christophe over the Kwaremont. It was not the right tactic to go alone from there, we were in a super good position with two,” Van Aert said.

“Maybe I recovered just a little bit better from the Paterberg attack, but it was never my intention to drop him.”

Van Aert insisted that Jumbo-Visma’s style of racing would present opportunities to the likes of Laporte and Benoot in the coming races, but are there any opportunities left to go around the other 20 or so teams that make up the peloton?

“I don’t think we are invincible,” Van Aert said. “We should keep our focus like we do now. For sure, the worst thing we can do is to think it comes easily.

“Only one week ago in Milan-San Remo we saw a lot of really strong other riders. Some days everything goes well and everyone is on the best shape possible and you have a result like this, but there are also other days coming, so keep your feet on the ground.”