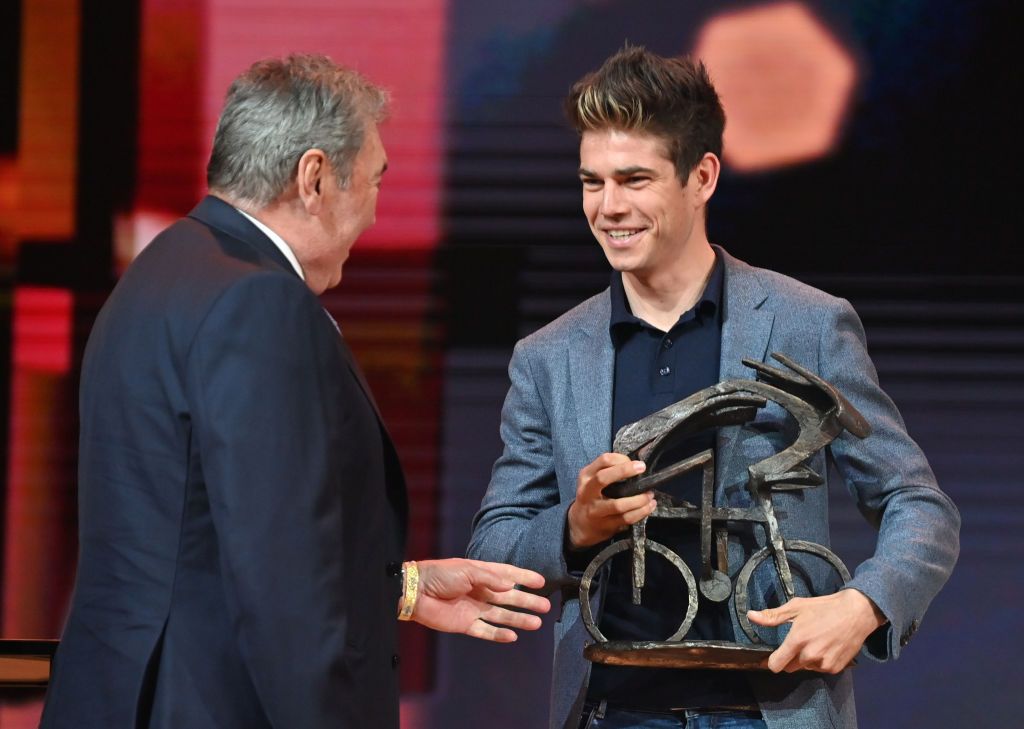 For the third year in a row, Wout van Aert (Jumbo-Visma) was voted Flandrien of the Year in the Het Nieuwsblad end-of-season gala. Points Race world champion Lotte Kopecky (Liv Racing) took home the women’s prize as Flandrienne of the Year.

Van Aert, 27, won three stages of the Tour de France – from a breakaway on the Mont Ventoux stage, in the time trial and the final sprint on the Champs-Élysées. He also claimed the silver medal at the Tokyo Olympics in the road race, and Classics victories at Gent-Wevelgem and the Amstel Gold Race, a podium at Milan-San Remo and the World Championships time trial along with stages of Tirreno-Adriatico and the overall Tour of Britain and the Belgian road title.

In the voting, Van Aert topped Tim Merlier (Alpecin-Fenix), a winner of one Tour de France stage, 574 points to 361. Jasper Stuyven (Trek-Segafredo) was third with 355, while Jasper Philipsen (Alpecin-Fenix) was fourth with 337. Remco Evenepoel finished a distant fifth with 293 votes.

Unlucky Paris-Roubaix still ‘a lot of fun’ for Kopecky

Kopecky, on holiday in Curaçao, accepted her award virtually. The double national champion is fresh off winning the world title in the Points Race at the UCI Track World Championships, capping off a season that included the overall victory in the Lotto Belgium Tour, a stage and the points classification at the Thüringen Ladies Tour and the Ceratizit Challenge by La Vuelta and an early season win at Le Samyn. She also was fourth in the Olympic Games road race.

She won the Flandrienne award ahead of Jolien D’hoore and Shari Bossuyt.

Thibau Nys won the young Flandrien of the year after claiming the U23 European Road Race title, while Alec Segaert won the junior prize. Tim Declercq won the prize for ‘Teammate of the Year’ and D’hoore was honoured with a Lifetime Achievement Award for her impressive career.

Para rider Tim Celen has received the second ‘Trophy Patrick Sercu’, the prize for the most remarkable achievement in a discipline other than elite road cycling.