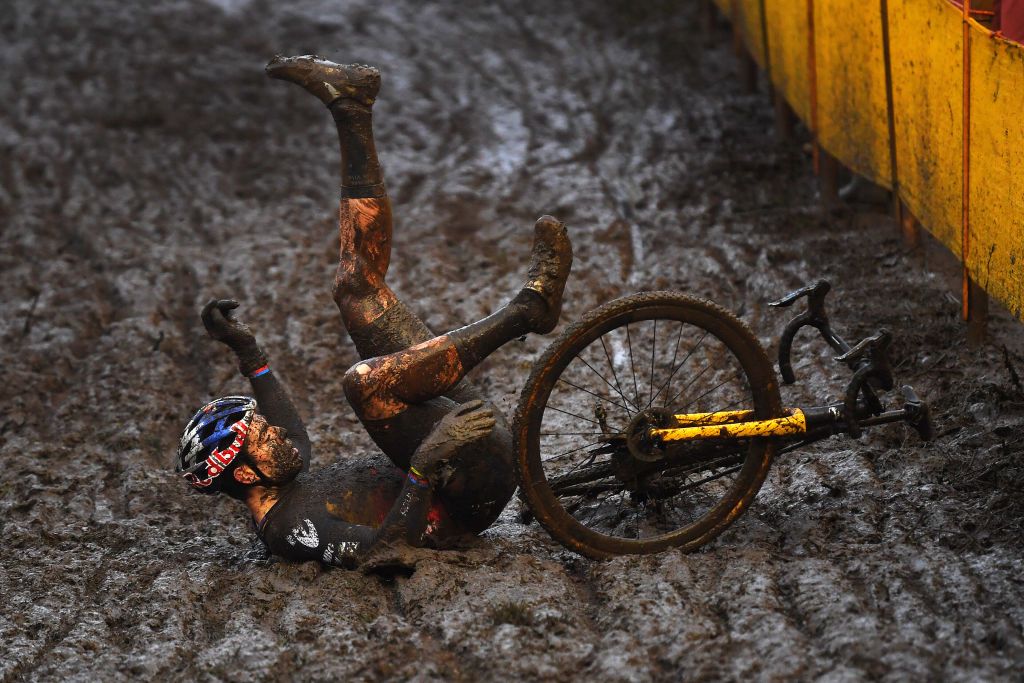 Wout van Aert (Jumbo-Visma) put in a devastatingly dominant ride in his first cyclo-cross race of the season, taking out the win at the Superprestige in Boom by a huge margin over second-placed Toon Aerts (Baloise Trek).

Van Aert was unsure of how he would fare after coming down with a mild cold (he tested negative for COVID-19) this week but was immediately a level above the best, riding a steep climb where others had to run.

That move and a crash from Aerts allowed Van Aert a lead that he never relinquished.

“I immediately felt that I was good and could move up quickly. I had not expected that at all,” Van Aert said according to Sporza.

“I actually thought that I would make a difference with Toon, but when I suddenly looked back, I saw that the gap was large. I then looked for my own pace and that turned out to be faster than that of the rest.”

In the closing laps, Van Aert’s lead edged close to two minutes but then, on the second to last lap, he lost control on the slick descent where so many others had fallen and landed on the drive-side of his bike. With his chain off, he had to run to the pits for a new bike but it hardly mattered.

“That’s what you get when you have such a big lead; you lose some concentration and I was already a bit tired. But that’s part of it,” he said.

The Belgian champion played down the significance of taking such a commanding victory in his opening race. Last season, it took Van Aert four races before he finally won in a similarly gnarly race in Herentals. This season, the rest of the field has been racing an unusually heavy calendar made more taxing by almost weekly World Cups.

“We should not draw too strong conclusions from this, but I am in any case much better than I expected,” Van Aert said. “Those training hours in the rain last week were not for nothing. And it gives confidence for what is to come.”

Aerts was also surprised by how strong Van Aert was in the race. “It is unbelievable what Wout van Aert is doing here. It was to be expected that he would join right up to the front. But the fact that he gave such a lap after one round shows a lot of confidence.”

Van Aert has a packed cyclo-cross calendar, and plans to race next weekend’s double in Essen and Val di Sole in Italy before attending the Jumbo-Visma team camp in Spain. He will return for the Christmas races at the Dendermonde World Cup on December 26 and race the full schedule through the Belgian championships on January 9.