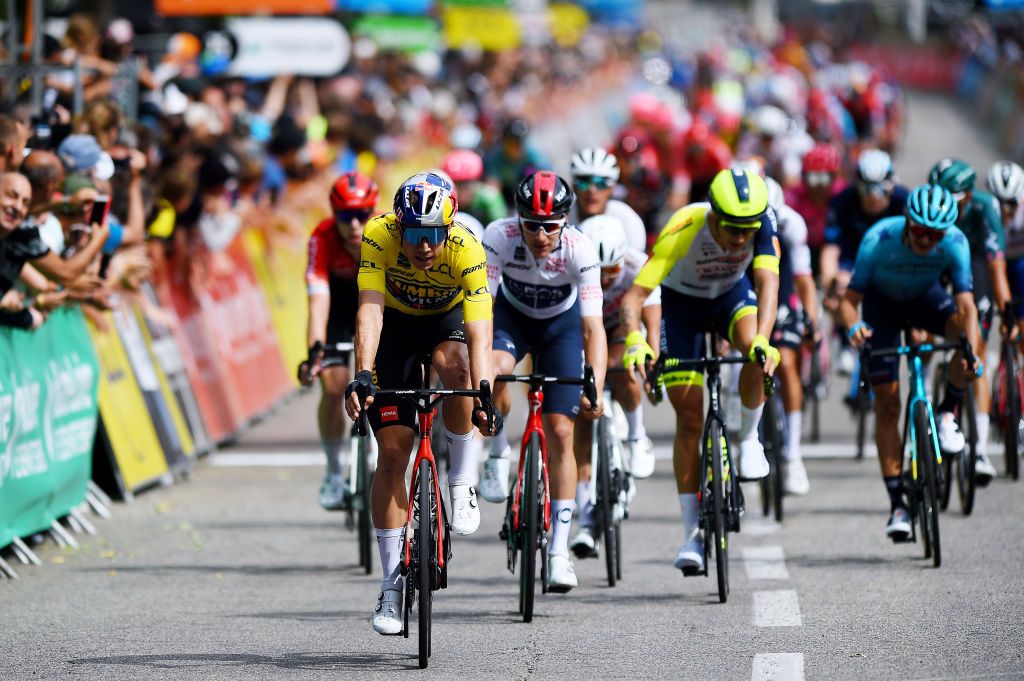 Wout van Aert led the peloton home once again on stage 2 of the Critérium du Dauphiné on Monday, but rather than taking his second victory of the race, he ended in sixth place behind the breakaway.

The Jumbo-Visma all-rounder is out of the race lead taken after his stage 1 triumph in Beauchastel, the yellow jersey now lying with Alexis Vuillermoz (TotalEnergies) after the Frenchman proved the fastest finisher from the five-man breakaway move.

Speaking after the race, Van Aert said that the whole peloton miscalculated in the chase on the road to Brives-Charensac.

“I think the whole bunch, including us, did a miscalculation,” he told the assembled press after the finish. “We went all-in. We put Chris Harper on the front from the first minute. He had to do 100k alone on the front and from then on when Chris was finished, Kruijswijk, Benoot and even Primož did a pull on the front.

“For sure if we knew we’d come up short like this, we would start faster earlier but afterwards it’s always earlier. I was thinking in the last 15 kilometres with the kicker we’d bring it down easier than it happened.”

Van Aert, who retains the green points jersey after the stage, said that he lost faith in the chances of catching the break once the group’s advantage of around 30 seconds or so held in the final kilometres of the hilly 170km stage.

“Really close in the end. We could see them in front of us,” Van Aert said. “On the other hand, when it was in the last 2 kilometres, 30 seconds or something, I wasn’t really confident in catching them any more. It’s a shame because the legs were there to take another victory, but it wasn’t meant to be.

“We could all have done a bit more work,” he added, responding to a question about Ineos contributing to the pacemaking in the peloton. “They pulled really hard on the climb with De Plus and then later Amador but then still four riders could have done something.

“If you see in the end, you come close, I think it’s a shame for everyone that you don’t sprint for the win. On the other hand, I didn’t expect that it was necessary for us to pull harder. In the final I was like ‘we’re going quite fast, we’re for sure going to catch them’ but apparently the breakaway was going faster.”

Tuesday’s third stage to Chastreix-Sancy concludes with a hilltop finish – a 6.2km uphill run to the line at an average of 5.6%. It’s another chance for the versatile Van Aert, though he acknowledged the finishing climb is well-suited to his teammate and team GC leader Primož Roglič.

He said that Jumbo-Visma would sort out their tactics on the road, though Roglič’s general classification aspirations should come first on the first key GC stage of the race.

“I think if I win the stage I could take [yellow] back with the bonus, but Primož is a really strong riders and someone you expect to do something on a stage like tomorrow.

“He’ll definitely be there in the final. For me and the team we have to make a clear plan tomorrow how we do it. It’ll also be an important stage for Primož on the GC. We have to see if it’s possible for me to hang on and go for a sprint.”