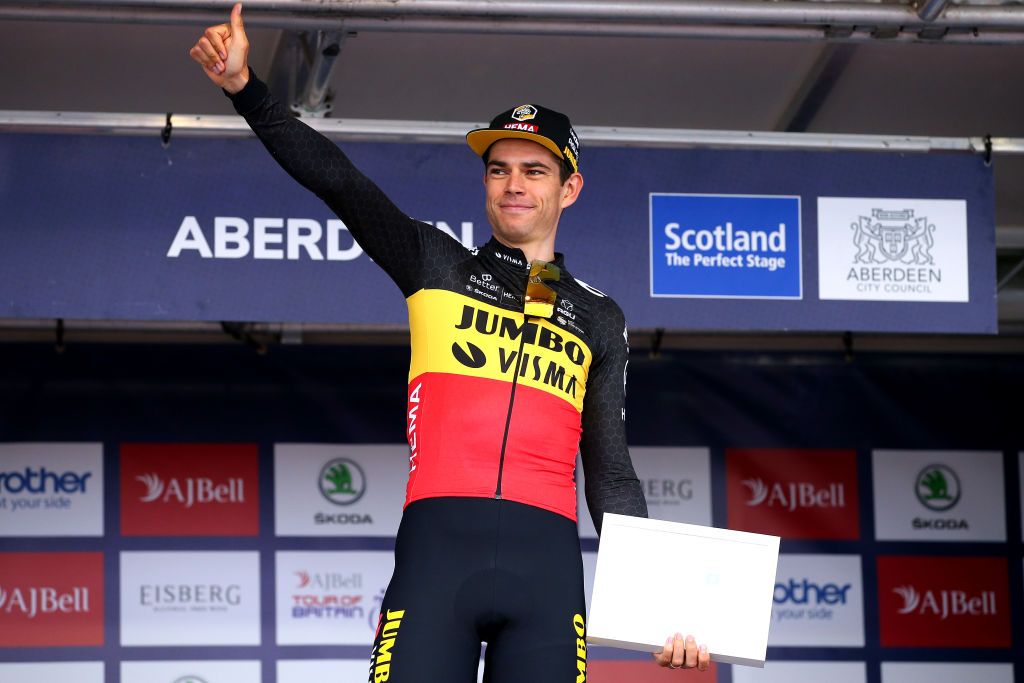 Wout van Aert (Jumbo-Visma) put on an impressive show on the final stage of the Tour of Britain, bursting past André Greipel (Israel Start-Up Nation) and Mark Cavendish (Deceuninck-Quickstep) to take his fourth stage victory of this year’s race and, thanks to the time bonus, unseating Ineos’ Ethan Hayter to seal the overall win.

The Belgian champion said the race “turned out to be more than I had dared dream of”, having come into it with the goal of honing his form for the UCI Road World Championships on home soil before the rescheduled Paris-Roubaix on October 3.

Instead, he won the opening stage and led the race for a day, then out-sprinted world champion Julian Alaphilippe (Deceuninck-Quickstep) on the uphill finish at Great Orme. He won a reduced bunch sprint on stage 6 but still came into the final stage four seconds down on Hayter in the overall standings.

He credited his team with their work to chase down the final stage breakaway and ensure a bunch sprint.

“After the boys’ hard work I owed it to them to get the victory. It was a very fast final with the wind at my back. I deliberately chose Mark Cavendish’s wheel in the final kilometre. Then I was a little surprised by Greipel’s early attack. Luckily I was able to anticipate and outsmart him in the final metres.

“It’s fantastic to win the general classification as well. On the line I saw that Ethan was not on the front row. It’s nice that it went exactly in the right direction today.”

With his performance, Van Aert is now the top favourite for the Classics-style Worlds elite men’s road race, a 268.3km race from Antwerp to Leuven, with 42 ‘hellingen’ between the two sections of local circuits in Leuven and two loops around Tervuren.

“In the past eight stages we were able to work under perfect conditions towards the races in the coming weeks. The Tour of Britain has been a good race for us in all respects. A beautiful course that has many similarities with the course of the World Cup in Flanders. The preparation for my next big goals is going smoothly.”