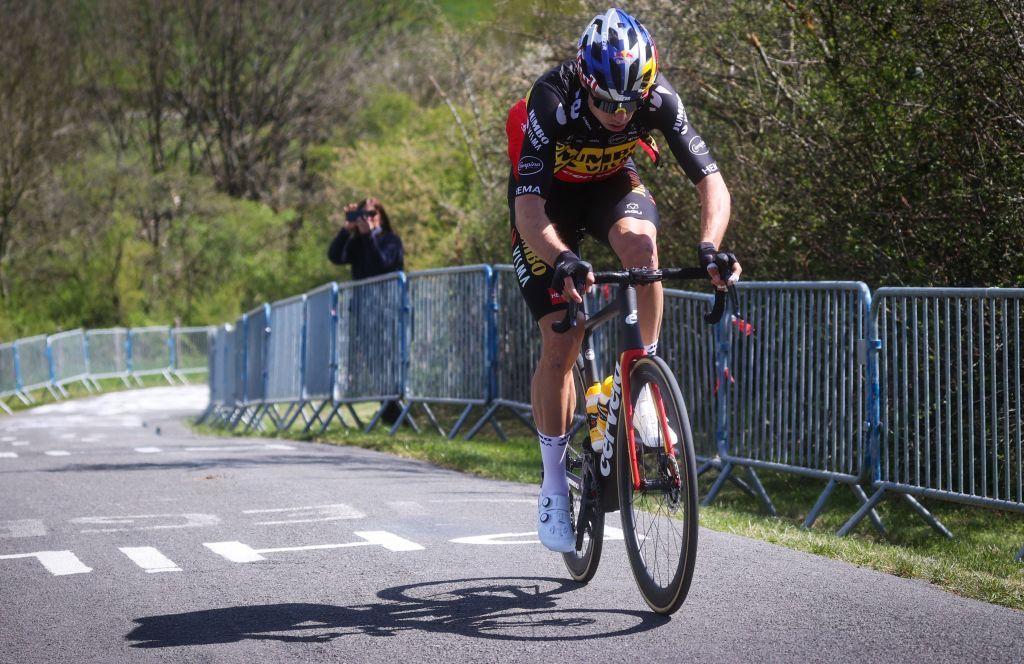 Wout van Aert (Jumbo-Visma) will make a previously unplanned debut at Liège–Bastogne–Liège on Sunday, his appearance in the oldest Classic the result of his COVID-19 disrupted campaign that saw him miss the Tour of Flanders and Amstel Gold Race. After previewing the course on Thursday, Van Aert said he has “a small chance of winning” in an interview published in Het Nieuwsblad.

Van Aert was among a large group of men and women who took advantage of the route inspection, in particular the final climb of the Côte de la Roche-aux-Faucons and descent to the finish in Liège as well as the race-making Côte de la Redoute which riders crest with 29.4km to go.

“I give myself a small chance to win, a big one to get a nice result,” Van Aert said after seeing the route.

Jumbo-Visma will be without 2020 Liège–Bastogne–Liège winner Primož Roglič, who is struggling with a knee problem. The Slovenian will lead the team for La Doyenne along with Tiesj Benoot, and was out training on a sunny day in Belgium with his team.

Van Aert reportedly had to change bikes at the base of the Haute Levée and explained he wanted to test a different handlebar.

“It was a bit of a shock when I noticed that the Walloon roads were even worse than the Flemish ones,” Van Aert said. “I already knew the climbs by the way and also the order.

“It was a tricky reconnaissance, but I already knew that. I train here a lot. The most interesting part was the descent to the finish. I didn’t know that one yet. It is a beautiful finish. You get there quickly after that descent. If you’re not there at the top of the Roche aux Faucons, there will be no turning back.”

Van Aert knows that the final climb is where the race splits up and hopes to be able to hold on. “It usually explodes there, but you have to get there of course. Many have already been ridden down before. Trying to follow will be hard enough.”

He gave it a good go on La Redoute, too, to test the legs after a taxing Paris-Roubaix last weekend where he finished second behind solo escapee Dylan van Baarle (Ineos).

“That climb suited me today,” he said. “But Sunday after all those kilometres on the counter, I might have less. But I recovered well from that. I also don’t suffer from my corona infection anymore. After Roubaix, I took two rest days. Wednesday and today, I finished two good training sessions to keep my condition.”

After winning Milan-San Remo in 2020, Van Aert has been in the top 10 of every Monument he’s started and has taken second in the Tour of Flanders and last weekend at Paris-Roubaix.

Van Aert called his debut in Liège–Bastogne–Liège, “a nice opportunity” and pointed to the importance of getting to know the Ardennes Classic. “It will be good for the future that I have already ridden here,” Van Aert said. “I believe I can do something here, otherwise I wouldn’t start.”