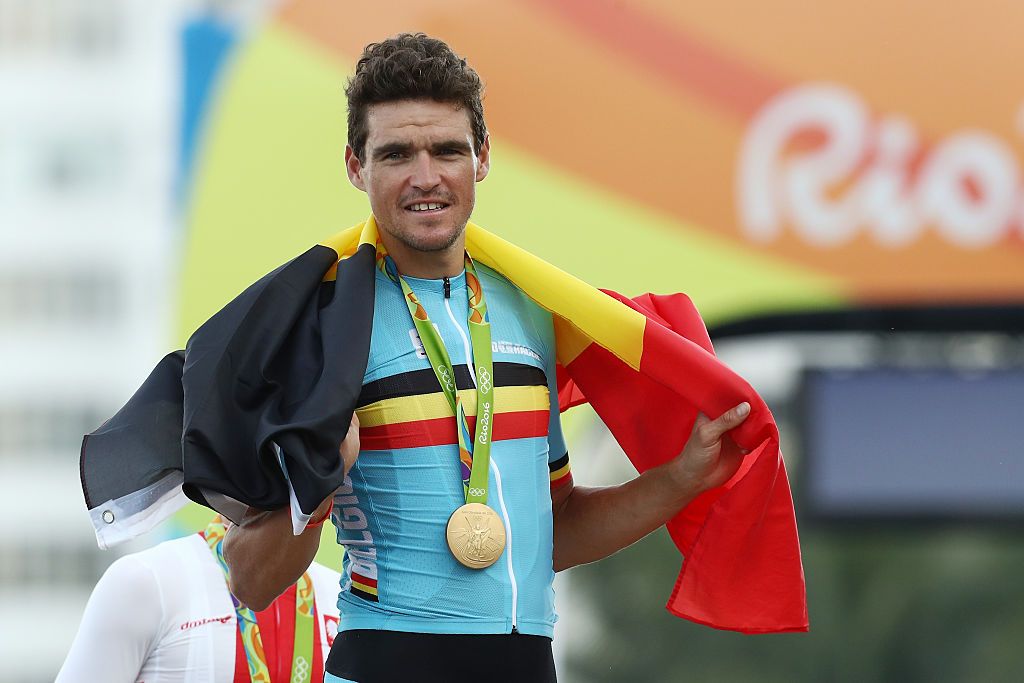 Greg Van Avermaet’s reign as the men’s Olympic Games road champion will likely come to an end on Saturday when the Belgian rolls off the start line at the Tokyo Games in support of Wout van Aert and Remco Evenepoel.

The veteran Classics star was the surprising winner of the men’s road race in Rio five years ago, but an Olympic cycle and a pandemic postponement will bring down the curtain on ‘Golden Greg’s’ dynasty.

Not that this is a time for reflection or sympathy – the 36-year-old is as determined as ever to ensure that the title remains in the Belgian camp for another three years, and he hopes that his experience and knowledge will inspire his young teammates to victory.

“It’s always been a big goal to go there and defend my title,” Van Avermaet told Cycling News. “It’s an honour to go back and to try and do best for my team and for myself. It won’t be a typical Olympics without a village or fans and because of the [COVID-19 coronavirus] bubbles.

“It will feel more like a cycling event far away from home, which is a pity but it’s good that the talents of this generation have their Olympic race. It means that they can fulfil their Olympic chances.”

Belgium line up with two heavyweight favourites in Van Aert and Evenepoel, both riders well suited to the climber-friendly course. Van Aert comes into the Games having three stage wins in the Tour de France, including the mountain stage that incorporated two ascents of Mont Ventoux.

Evenepoel, on the other hand, arrives in Tokyo with race-light, training-heavy preparation. Both riders are counted among the pre-race favourites and it’s the humble Van Avermaet who will protect them and help devise their tactics.

“For me it’s important and I’ll try and do my best. We’ve a super strong team and we’re going in with a different mindset to the one we had in Rio, where we were more of the underdogs. But with this team, and Wout and Remco on higher levels, we can be quite sure about ourselves and that we can win the race,” Van Avermaet told Cycling News.

“It’s about my experience. We’re not racing with eight guys, and I’ve done two Olympics. It’s a difficult race to read with tactics and that’s the most important thing.

“For me, the race is probably more about being a domestique than a leader, with what Wout showed at the Tour with his climbing and with Remco having the perfect preparation at altitude. Those two are above me and I’ll try and help them as much as possible.”

The Tour de France was a lean experience for Van Avermaet, with the Belgian admitting that he was below his best form during the race. That aside, he knows that a successful Games can define a rider’s career.

He saw how in 2016 he went from being a highly-successful road racer and transformed into a household name due to the nature of the Olympics and what they signify to a wider audience.

“It’s an honour to be selected and I’ll try and bring my experience to the team,” he said modestly.

“Winning the title changed my life and maybe they don’t realize it yet because they’re still young, but this is their opportunity. The parcours suits them and I’ve tried to bring this mentality to the team. They know from four years ago, with what happened in Belgium, that winning this event can change your life. That’s how I feel when I talk to them.”

This will surely be Van Avermaet’s final Games, but he wants to bow out in a manner befitting a champion, and like the Olympic torch itself, pass on the mantle of road race winner to a teammate. Van Aert and Evenepoel couldn’t wish for a better teammate and road captain.

“Since that win I’ve been reminded every day about the win. You meet other Olympic champions, and they want a photo. And it connects more than just the cycling world. It’s been like that for the last five years and that’s quite cool. It’s been amazing to achieve that in my career.”