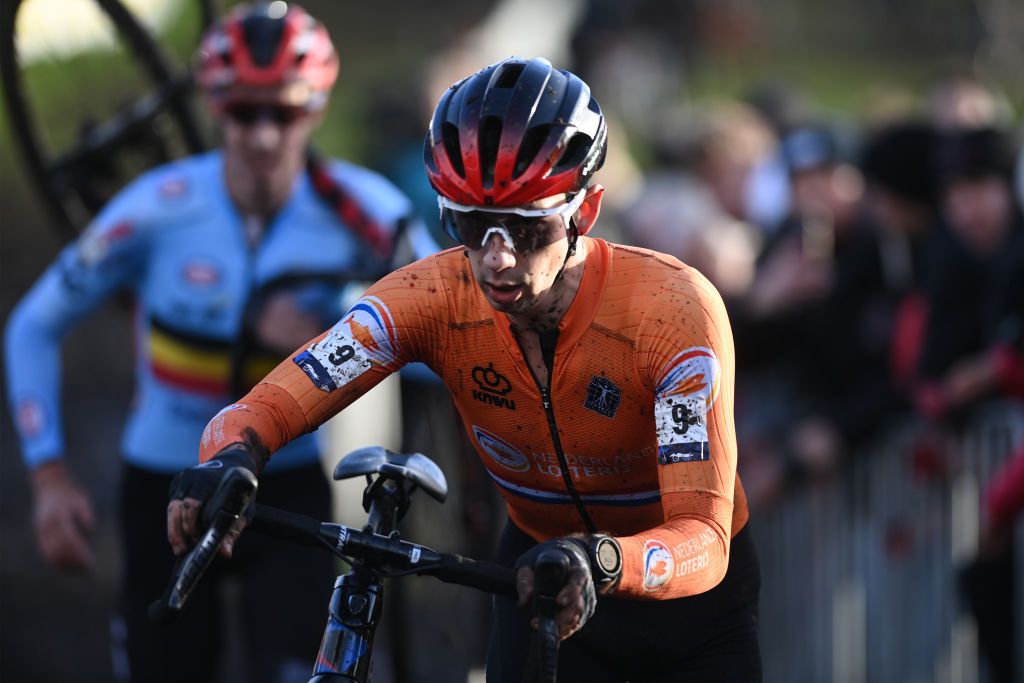 Lars van der Haar (Netherlands) on his way to victory in the men’s elite race at the European Championships in 2021 (Image credit: Getty Images Sport)

A tough European Cyclo-cross Championships course and race, that Lars van der Haar said played to his strengths, helped the Dutch rider break the Belgian stronghold in the men’s elite category in front of an appreciative home crowd.

Belgian riders have stood on the top of the men’s elite podium at every one of the five Cyclo-Cross World Cup Series races so far and with so many strong options heading into the race to crown a new European champion it seemed most likely that the nation would again dominate.

However, while Van der Haar may not have taken a win for a while he has been increasingly showing his hand as a threat, taking second in round three of the World Cup series in Iowa City and then again taking to the middle step of the podium at the Zonhoven round. The 30 year old was the only interloper in the sea of blue at the European Championships last year, breaking up the top six and podium with the orange of the Dutch team by taking third in 2020.

This time, he was still just as outnumbered but could not be outclassed, riding to his first victory in two years.

“I gave it my all and I had to try not to take the lead in the beginning, but I still had to close some gaps,” said Van der Haar in a report on Dutch website Wielerflits. “That made it a hard race and that I got exactly what I wanted.”

Van der Haar took the victory on an exposed course that included a relentless climb of the cobbled Col du Vam, with Quinten Hermans being the first of five chasing riders from Belgium. Hermans came over the line second, 25 seconds back, and Michael Vanthourenhout was third, 54 seconds behind the Dutch rider.

“I felt really good, but this course is so atypical and so tough,” said Van der Haar in Wielerflits, adding that this played to his cards.

Van der Haar won the European Championships in 2015, again on home soil, when he battled with another rider from Belgium, Wout van Aert. That year he headed into the race as one of the favourites, with multiple victories for the season already under his belt, yet this time he hadn’t stood on the top step since October of 2019.

“This one is nicer, much nicer,” Van der Haar said on the Dutch website. “I haven’t been able to win much for a number of years, so to take a title like that is really nice.”