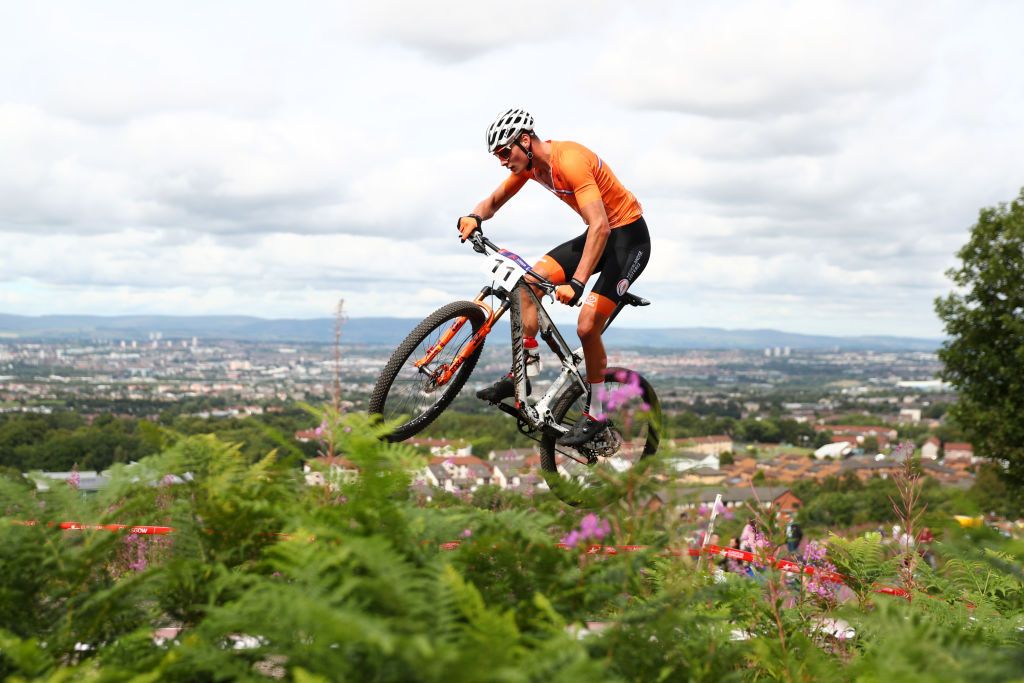 Alpecin-Fenix star Mathieu van der Poel has confirmed that he will continue to race across multiple disciplines to the next Olympic Games in 2024, regardless of whether he wins gold in Tokyo this year.

Following a successful spring on the road, the Dutchman is back racing on the mountain bike, winning the short circuit cross-country race at the Albstadt World Cup on Saturday before going on to finish seventh at the main race later in the day.

He’s set to take part in this weekend’s World Cup round at Nove Mesto as he takes aim at the cross-country race at the Tokyo Olympic Games. He’ll balance that goal with an appearance at his – and his team’s – first Tour de France in July, and said in a press conference on Tuesday that he sees himself racing on the road and mountain bike for some time to come.

“As I see it now, I think I’ll continue mountain biking and road racing until the next Olympics,” he said. “Whether I win Olympic gold or not, it won’t make a difference. I really like the combination.”

Balancing the Olympics and the Tour will be a challenge for many riders around the peloton this season, with time trial specialists taking aim at the ITT in Japan on July 28 and climbers racing the road race four days earlier. Van der Poel will ride the cross-country race on July 26 – a switch in disciplines just eight days after the Tour finishes in Paris.

Whether Van der Poel will make it to the Champs-Élysées is still up for debate, but skipping the Grand Tour altogether to focus on the mountain bike is out of the question, he said, even if he’d prefer a gold medal than a spell in the maillot jaune.

“I don’t think skipping is an option. It’s pretty obvious that I have to be part of the team’s first Tour de France. I don’t really see it as an obligation either. It’s really cool to be part of it and we’ll see how it turns out,” the Alpecin-Fenix leader said.

“I think for now that I prefer to try and win the Olympics than get the yellow jersey, but it depends on how the legs and form are. Maybe it’s possible to do both but we’ll see it in future. We’ll just start the Tour with the Tour as a goal. I think it’s possible to get a good shape out of the Tour and then go to the Olympics.

“It’s a difficult way to go to the Olympics through the Tour de France. Without the Corona[virus] situation, I could have focussed on the Olympics last year and gone to the Tour de France now, but the importance for the team and sponsors is also a little bit in the Tour, so I understand that I have to be there.”

Van der Poel’s seventh-placed finish at Albstadt – 1:13 down on winner Victor Koretzky and two places behind Tom Pidcock – isn’t what he had hoped for on his first race back on the mountain bike, but he said that he didn’t expect to be on top form after his break from competition and quick readjustment to the bike.

“I always hope for more. I know the preparation was quite short. We discussed with the trainer that the shape is not where it needs to be, but I hope to do better in Nove Mesto.

“If you look at the course, I think Nove Mesto a better course for me, but I also have to be able to compete and win in Albstadt. But after my break following Flanders, it was quite short preparation to be at my top level, so I hope to do a little bit better this weekend.”

After Nove Mesto, the results of which will decide where he’ll start in Tokyo, Van der Poel will meet back up with his team and begin preparations for the Tour.