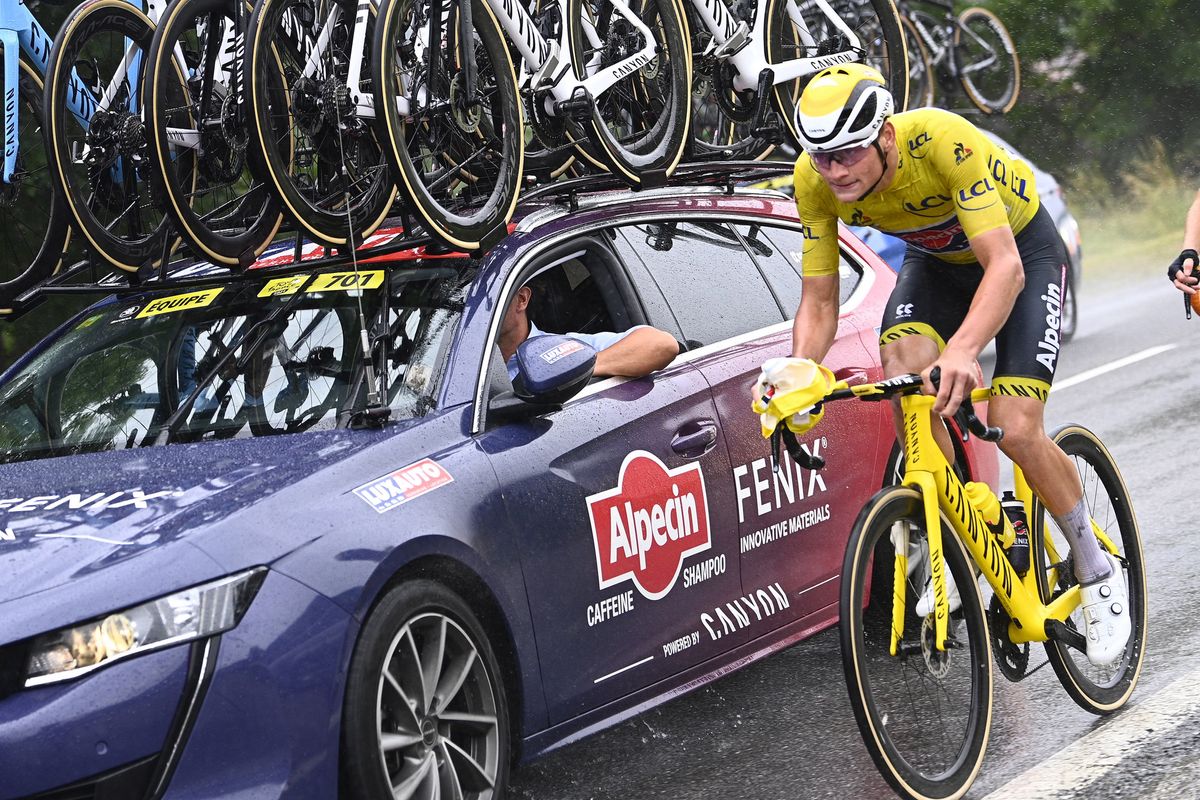 Mathieu van der Poel and Wout van Aert have seemed to match one another stride for stride throughout their careers and the rivalry looks set to continue in the quest for the green jersey at the 2022 Tour de France.

After Van Aert signalled his intention last week to vie for the points classification at next year’s Tour, the Alpecin-Fenix management duo of Christoph and Philip Roodhooft signalled that their team would seek to challenge him for the title, either through Jasper Philipsen or Van der Poel himself.

“When I hear Van Aert say that he is going for the green jersey, I think: ‘We’ll see about that,’” Christoph Roodhooft told Het Laatste Nieuws after the collect the Kristallen Feits award in Belgium for best team managers of the year.

“If everything goes somewhat normal, that’s a very realistic target for us. I think of Jasper Philipsen or of Mathieu van der Poel.”

Roodhooft’s brother Philip echoed that thought. Van der Poel made his Tour debut in 2020, winning stage 2 at Mûr-de-Bretagne and holding the yellow jersey for six days. He then abandoned the race after the first week to focus on his preparation for the mountain bike event at the Tokyo Olympics.

Mark Cavendish won the green jersey at the 2021 Tour, becoming the second Deceuninck-QuickStep rider in as many years to win the classification after Sam Bennett. Peter Sagan, who moves from Bora-Hansgrohe to TotalEnergies in 2022, won the seven green jerseys in eight Tours between 2012 and 2019.

The Roodhooft brothers downplayed the idea that they and Van der Poel were motivated specifically by a rivalry with Van Aert, pointing out that their team simply competed in the same space – in the Classics and in sprints – as Jumbo-Visma and Deceuninck-QuickStep.

“The ambitions are the same. Jumbo-Visma, Deceuninck-QuickStep, our Alpecin-Fenix team, we all want the same things,” said Christoph Roodhooft.

Van der Poel will ride to defend his cyclo-cross world title this winter and then seek to add to his haul of Classics next Spring, but his 2022 campaign will also feature a tilt at the mountain bike world title and even the first ever Gravel World Championships, an endeavour that sets him apart from both Van Aert and world road champion Julian Alaphilippe.

“We can say that we also want to become world champion in mountain bike. For the others that is impossible,” said Christoph Roodhooft. “In the WorldTour peloton, Tom Pidcock is the only one who can say the same.”

Alpecin-Fenix have this week added Deceuninck to their list of sponsors for the next four seasons after the Belgian window and door company parts company with QuickStep at the end of this year. After winning 33 races in 2021, including stage wins at all three Grand Tours, Alpecin-Fenix were again the best ranked ProTeam in the peloton. They may eventually step up to the WorldTour but their success means they have earned an automatic invitation to all major WorldTour races in 2022.

“The number of WorldTour licences is limited. We’re trying to get to where we want to be by another route,” said Philip Roodhooft.

“The fact that Deceuninck is now joining us is another proof of this. They sponsored the most successful team in the world for three years. Now they come to us, with full enthusiasm. That’s a great compliment.”