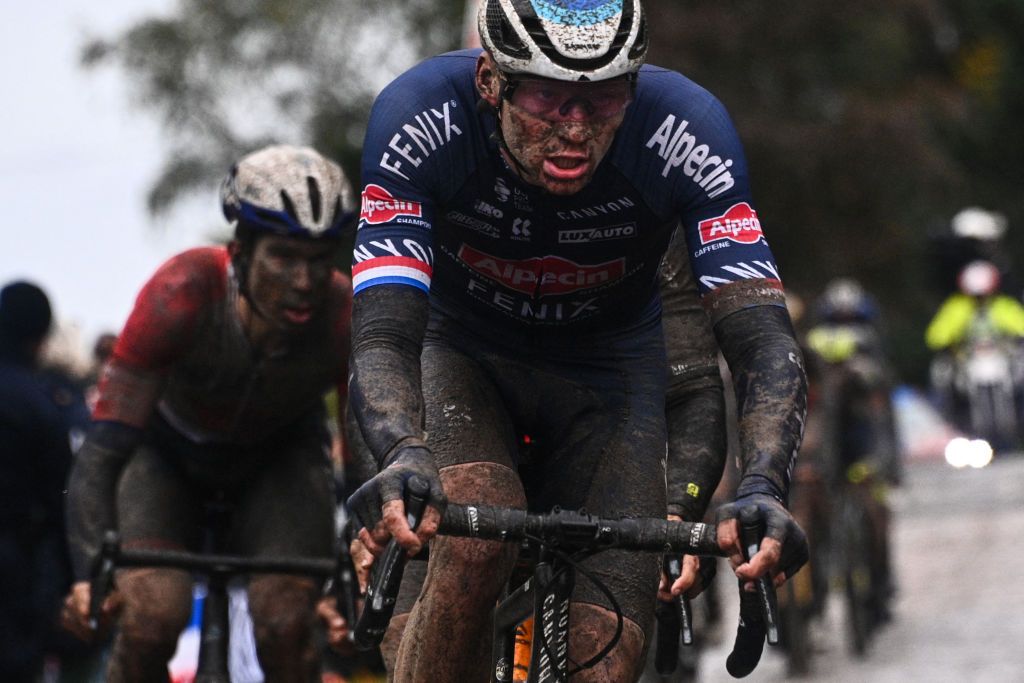 Mathieu van der Poel (Alpecin-Fenix) finished third in his maiden Paris-Roubaix. The 27-year-old Dutch rider banked on his sprint to get the win on the Roubaix velodrome but ran out of gas and was beaten by Sonny Colbrelli (Bahrain Victorious) and Florian Vermeersch (Lotto-Soudal).

Van der Poel wasn’t showing a smiling face on the podium and he skipped the obligatory press conference. Nevertheless, during the flash interviews, he did seem content with the outcome of the race.

“If I’m not winning a race I want to die trying. I can be proud,” Van der Poel said. “My legs were dead-empty at the end of the race. I am proud that I cracked the podium in my first participation in Paris-Roubaix. It was really hard.

“Even though it was my first edition I feel it’s one for the history books and never to forget.”

Much earlier, it seemed like Van der Poel would be very hard to beat. He safely escaped the carnage in the first pavé sectors and surged forward during the passage through the Arenberg forest. He was playing with the pedals on the wet cobbles and generous in his efforts, even off the pavé he kept going full gas at the front of the groups he was riding in.

At that moment in the race, co-favourite Wout van Aert (Jumbo-Visma) was on the ropes and the early breakaway group was within reach. Colbrelli was able to keep up but one might expect that the Dutch ace would drop the European champion at one point. At first, the long breakaway move from Gianni Moscon (Ineos Grenadiers) seemed sure to lead to success but bad luck crossed his path. In the end, fellow Italian Colbrelli played his cards the best way by anticipating Van der Poel’s next move, avoiding major moves and banking on the sprint qualities that would lead to the win.

Van der Poel was spotted for the first time when he was brought back to the peloton after a mechanical problem after 115km of racing. Teammates Jonas Rickaert and Silvan Dillier were present to help him out. On pavé sector 22, the big guns appeared at the front of the peloton for the first time. Van Aert led the group over the cobbles and then Van der Poel accelerated, briefly gapping the rest of the pack. Twenty kilometres later the small peloton entered the so-called Trouée d’Arenberg, the 2300m long pavé sector through the Arenberg forest. The remains of the peloton split apart and Van der Poel stormed forward.

Van Aert, who was caught behind a crash, and the other favourites eventually came back to the Dutch ace, but despite all the accelerations in the small peloton the long breakaway always maintained a lead of at least a minute. Sole survivor Moscon seemed on his way to the win until he punctured and needed a bike change. He struggled with his fresh bike, crashed and was caught and dropped by Van der Poel, Colbrelli and Vermeersch who remained together until the vélodrome.

“In the Arenberg forest, I showed myself for the first time. From that moment on the race never stopped,” Van der Poel explained. “I managed to make up a lot with my technical skills on the pavé sections. During the final 30-40km I was constantly riding on the limit.

“It was a really long finale which took its toll at the end of the race, even though I took a gel every 5-10km in the final 50km. I wanted to have enough energy but in the end, I lacked something to finish it off. You’re hoping that the others are dead too and that’s obviously the case. I hoped that I would be the least dead among the three of us for the sprint but it ended up that I was the one that was completely dead.”

The road season is now over for Van der Poel. He managed to return in form just in time after back problems ruled him out since the Olympic Games cross-country race in August. He rode a few smaller races before deciding to take part at the road world championships in Leuven, Belgium last week. Over there, he wasn’t able to fight up against Julian Alaphilippe but did feel that he might be ready just in time to race for the win in Paris-Roubaix and that proved to be the case.

While doing the flash interviews Van der Poel was supporting his sore back but when asked he explained his back was okay. “Everybody’s back will be hurting after such a race. I wasn’t bothered by my back today. It was a really hard edition.”

Van der Poel is expected to ride his first cyclo-cross races in December.

“It’ll take a while before my head switches to ‘cross. Now it’s time for a break,” he concluded.