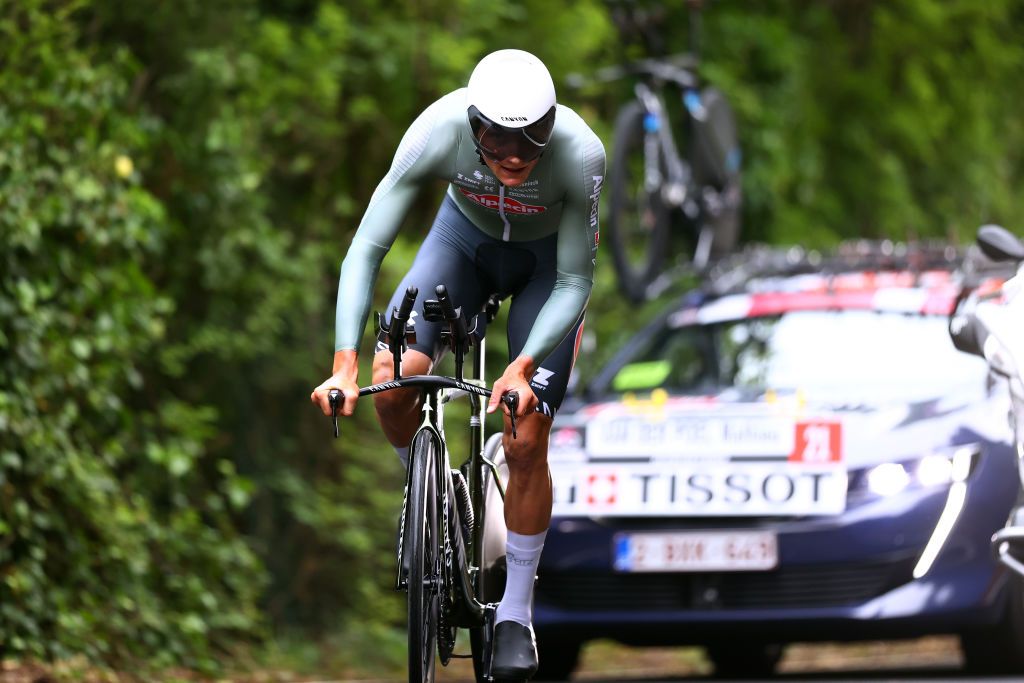 When the aim is to go as fast as possible on a bike, no stone is left unturned, and when that aim is paired with the opportunity of a grand tour leader’s jersey, that attention to detail goes to a new dimension as teams, riders and sponsors look to outdo their competitors.

This year’s Tour de France opens with a 13.2km individual time trial in Copenhagen, Denmark, and in preparation, Kalas Sportswear, the clothing sponsor of Alpecin-Fenix (who are now rebranded to Alpecin-Deceuninck for the race) have been working hard to help Mathieu van der Poel snatch the race lead from the time trial specialists.

The Czech brand has formed a partnership with British aerodynamics experts Vorteq – the brand behind the £2,750 skinsuit that Simon Yates and Matteo Sobrero (BikeExchange-Jayco) wore to their respective Giro d’Italia time trial victories, as well as Alex Dowsett and Dan Bigham on their hour record attempts – to create new “world-class skinsuits”.

“Performance and innovation are at the heart of everything we strive for at Kalas. Our commitment to our partners delivers the best available support to enable them to achieve World Tour victories,” explained Kalas Director Josef Filip. “This special combination of their unique aero expertise and our own state-of-the-art production facility means we can together create a new collection of world class aero kits.”

It won’t be the first time that Alpecin-Fenix has maximised the aerodynamics of their equipment for a Tour de France time trial. During last year’s race, the team was forced into a last-minute scramble to optimise their leader’s time trial bike as he sought to defend the yellow jersey on the stage 5 time trial after fighting his way into the race lead on stage 2.

This scramble led to an associate of the team driving 10 hours across France to deliver a sponsor-incorrect Princeton Carbonworks wheel. Despite that, he instead used an Aerocoach wheelset, as well as an Aerocoach cockpit and a Lazer helmet. All of which were technically sponsor-incorrect. For that stage, given he was already in yellow, the Dutchman was forced to wear the race-issue skinsuit from Le Coq Sportif, rather than the Sonic aero time trial suit provided by Kalas.

This year, there’s no last-minute scramble; Van der Poel and his teammates have reportedly already been in the Silverstone wind tunnel as part of the Kalas-Vorteq partnership to dial in their equipment.

“This partnership with Vorteq has propelled us both immediately to the forefront of skinsuit technology. The quality and volume of data we have been able to analyse together is exceptional,” explained Kalas’ head of development, František Klouček. “We have already used this data to find considerable gains for our customers, including Alpecin-Deceuninck, who are currently benefiting from this partnership with time in the Silverstone wind tunnel where we are optimising their skinsuits for the Tour de France.”

Of course, Van der Poel will have a hard task to snatch yellow ahead of his long-time rival Wout van Aert and time trial supremo Filippo Ganna, and as such it’s key to point out that the partnership isn’t solely focussed on the upcoming Tour prologue, and will extend into the future, providing the same level of kit the general public.

“We have multiple data sets from our own garments and from the tests we have done with our competitor equipment, so we are confident in our claims when we say we have already delivered world class products for our customers, with much more to come in future,” Klouček concluded.

You can follow all the action of the Tour de France live, right here on Cycling News, where the countdown is already underway.