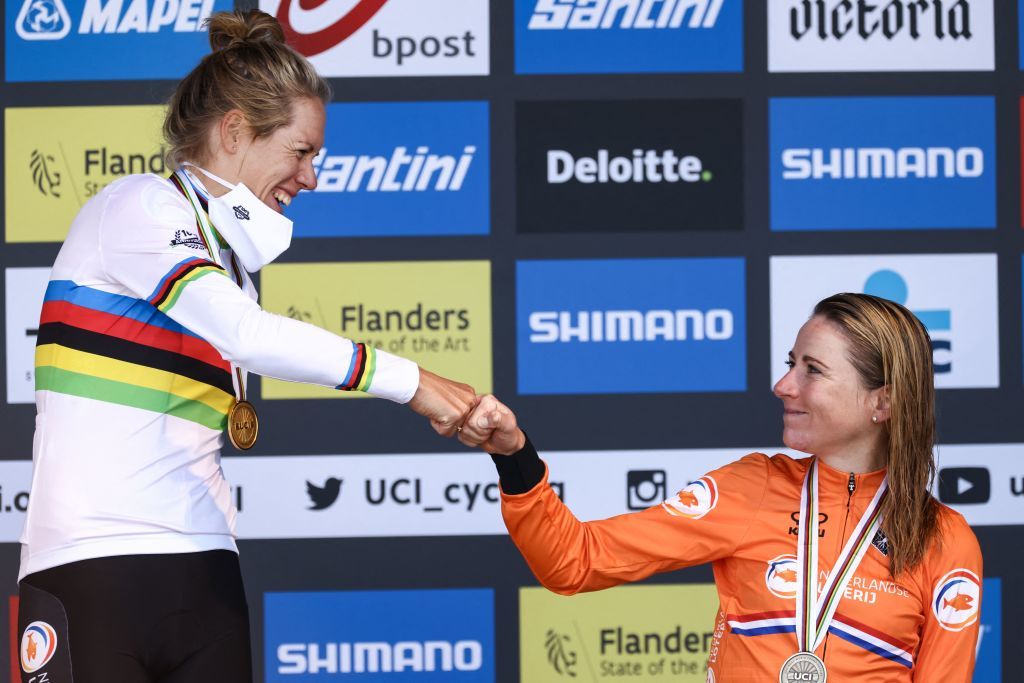 The Olympic time trial champion prefers a TT-course to feature some climbing in it. Nevertheless, the 38-year-old Dutch star went flat out and that hard work was rewarded with a bronze medal behind winner Ellen van Dijk (Netherlands) and runner-up Marlen Reusser (Switzerland).

Before the race, Van Vleuten realized that it would be very difficult to win on this course. She stated that Van Dijk and Reusser can push higher power numbers meaning she would have to try and win something back on them with aerodynamics. Nevertheless, in contrast to most of her rivals, she rode without aero shoe covers.

“Ellen deserves the title on this course. It wasn’t really my course. I’m happy with my performance today. I had really good power numbers and was really happy with my ride. There were two stronger women on this course. It’s super nice for Ellen. She really works hard. She’s so professional and a really good colleague. You can always count on her. I know how hard she works for it. I was happy for her to see that she got the jersey back. I know how nice it is to win the jersey. It will look good on her in the time trials,” Van Vleuten said at the post-race press conference on the stage of Bruges’ concert hall.

The top-3 clearly was on another level as fourth-placed Amber Neben (USA) trailed Van Vleuten by a minute.

“I expected this outcome but did hope to get the jersey again. I rode a good time trial and never lost power. It went really smoothly. On a course like this that leads to third place. I’ve never averaged power numbers as high as today so I have to be satisfied with my performance and accept that two riders are better on a course like this. It’s nice for Ellen to win and finally find a course like this. It was something for the powerhouses. She deserves the win,” Van Vleuten told NOS after the finish.

Together with Van Dijk and Riejanne Markus, she’ll ride the team relay on Wednesday. “We just joked that there was an after-party planned tonight but Ellen said we’ll have our after-party on Wednesday. That’s obviously not the case if you have to try and keep up with her,” Van Vleuten laughed.

Anna van der Breggen will not join the party on Wednesday. She’s concluding her career after 2021 but arrived at the World Championships with fatigue. Van der Breggen didn’t defend her individual time trial title and will also skip the team relay, hoping to find some energy to be in the mix for the road race on Saturday.

“It would’ve been nicer to race together with Anna and Ellen because we’ve always been fighting each other in this discipline. Symbolically, it would be nice to conclude that with a team time trial ride because she’s waving the sport goodbye. It wasn’t to be and it’ll be fun with Riejanne and Ellen, too. The men are in the sickbay, too. Nevertheless, I’m looking forward to it,” Van Vleuten said.

Van Vleuten’s focus will quickly turn to Saturday’s hillier road race between Antwerp and Leuven where she’ll be one of the top favourites along with compatriot Anna van der Breggen.

Last year in Imola, Van Vleuten was runner-up to Van der Breggen, who won double titles in the time trial and road race. This time around Van der Breggen is struggling with her form. She skipped the time trial and team relay because of fatigue, and has said that she would like to work in a support role for the Dutch team. Van Vleuten won her only road world title in 2019 in Harrogate, UK.