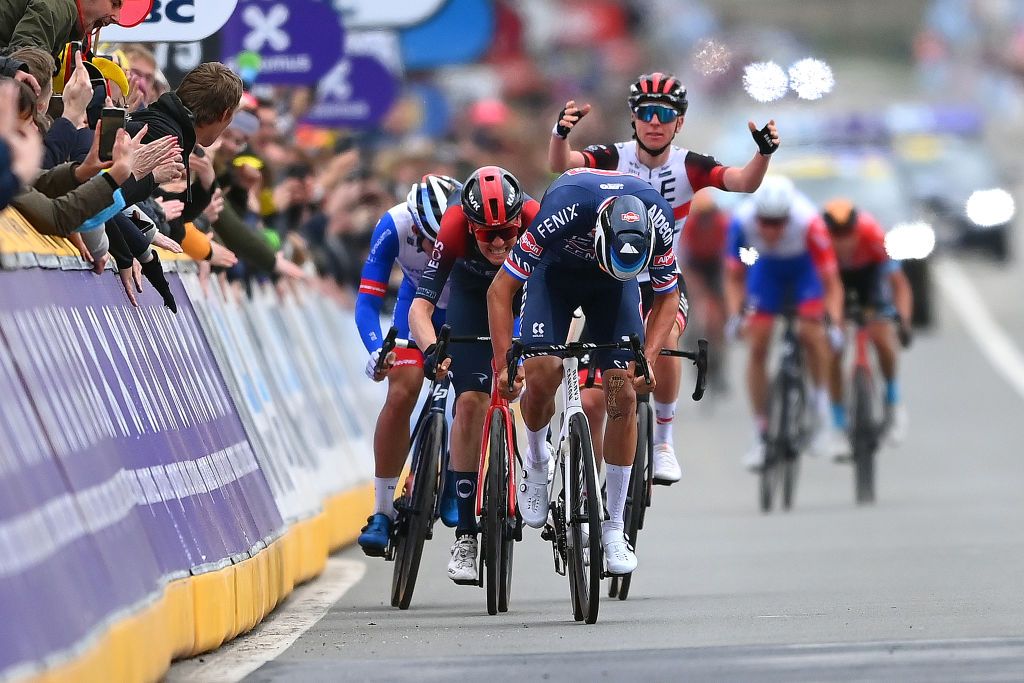 Tadej Pogačar suggested he was frustrated with himself after being boxed-in during the sprint that decided the Tour of Flanders but post-race video footage has emerged of the Tour de France winner shouting towards Dylan van Baarle in a rare show of anger.

Pogačar tried to drop all his rivals with searing attacks on the key cobbled climbs on Sunday. He eventually got away with Mathieu van der Poel but their mind games in the final kilometre allowed Van Baarle and Valentin Madouas of Groupama-FDJ to catch them just in time for the sprint.

Van der Poel surged away to win, while Pogačar was stuck behind, any chance of victory or second place suddenly transformed to fourth. Pogačar waved his arms in the air as Van der Poel hit the line and won the Tour of Flanders, seemingly frustrated to have missed out on victory and even second place.

Pogačar didn’t stop to talk to the media at the finish area. However Flobikes journalist Gregor Brown captured the moment he circled around to angrily confront Van Baarle.

“These things happen in a sprint,” Van Baarle appears to say but Pogačar waves his arm in anger and vents his anger towards the Dutchman.

He then shakes his head in disbelief as staff from the UAE Team Emirates squad step-in and form a protective and distancing shield around Pogačar. Both riders later played down the moment but the Slovenian lost his usual self-control for a few seconds.

“No, Pogačar didn’t come over to congratulate me for my nice second place,” Van Baarle later told Eurosport.

After showering on the UAE Team Emirates bus, Pogačar was calmer and also more diplomatic, claiming he was angry with himself rather than Van Baarle.

“In the moment, I was really disappointed because I couldn’t do my sprint. I was boxed-in, but that’s cycling. Sometimes you’re boxed-in and sometimes you have an open road,” Pogačar told journalists, including Cycling News.

“I was not really mad about it to anyone. It might have seemed that way but I was frustrated with myself because I couldn’t do the best 100 metres to the finish.”

Click below to see Pogačar heated exchange with Van Baarle.