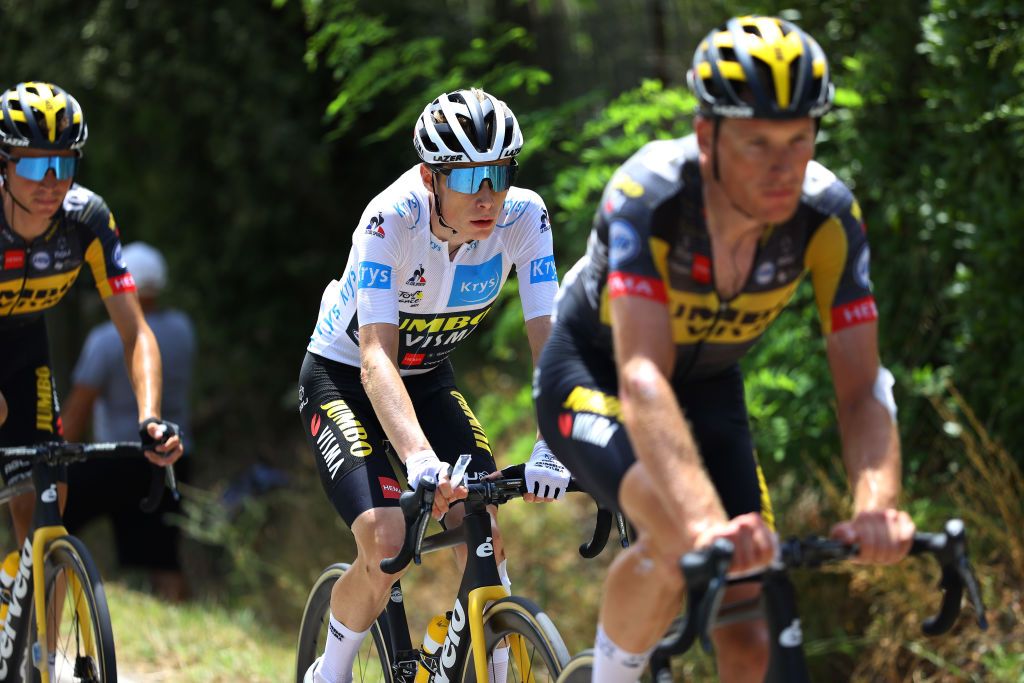 Jonas Vingegaard began this Tour de France as Primož Roglič’s bodyguard. “Where he goes, I go,” he said before the Grand Départ. “If Roglič falls, then I fall too.”

It hasn’t quite panned out that way. Roglič’s heavy crash on the third day would eventually force him out of the race on stage 9, but Vingegaard’s stock has only risen in the intervening period.

Third place in the Laval time trial on stage 5 was the first firm indication of the young Dane’s form, and he rode strongly, too, on the race’s passage through the Alps last weekend. Tadej Pogačar’s dominance and Roglič’s travails dominated the headlines, making it easy to overlook the fact that Vingegaard was lying in fourth place overall when the Tour broke for its first rest day in Tignes.

By the upper reaches of Mont Ventoux on Wednesday, however, Vingegaard was no longer hiding in plain sight. Only Pogačar could initially match his sharp acceleration two kilometres from the top and even the maillot jaune wilted under Vingegaard’s forcing within 400 metres. By the summit, Vingegaard had a lead of 37 seconds on Pogačar, and though he was pegged back on the fast descent into Malaucène, it was a notable calling card.

“We lost Primož and then we had to change our mindset, and now I can try to go for my own result,” Vingegaard told reporters in Saint-Paul-Trois-Châteaux on Thursday morning. “Now I will try to do my best every day.”

Vingegaard remains 5:32 down on Pogačar in the overall standings, but he moved into third place after the double ascent of the Ventoux. It remains to be seen if he winds up as Pogačar’s prime challenger in the latter part of the race, but he is, for now, the only rider to have even briefly discommoded the yellow jersey.

“It was crazy. He is one of the best bike riders in the world and it was just crazy to do this,” Vingegaard said of dropping Pogačar atop Mont Ventoux. The acceleration itself, meanwhile, was improvised rather than preordained.

“It was not part of the plan, it came to me when I was on Mont Ventoux the second time. I was trying to follow them and that’s the plan: to follow. But then, if I’m in good shape, I can try to attack. That’s the plan.”

Jumbo-Visma directeur sportif Merijn Zeeman, meanwhile, acknowledged that Vingegaard’s presence in the upper reaches of the general classification was not a part of his team’s strategy ahead of the race. Then again, every team has a plan until their leader crashes heavily on a narrow road in the opening week. Jumbo-Visma may be seeking to develop the 24-year-old Vingegaard for the future, but he has a real opportunity to finish on the Tour podium in the here and now.

“We have a long-term plan with Jonas and we think he can go very far,” Zeeman told NOS. “Everything is gearing up for him now, but everything is also new to him. Four years ago he was still working in the fish market. He had to work from five in the morning until midday, and then he went to train in the afternoon. Now he’s riding in the white jersey in the Tour de France.”

The Hillerslev native is in his third season at WorldTour level and his second Grand Tour, having helped Roglič to victory at last year’s Vuelta a España. This season, Vingegaard has claimed a stage of the UAE Tour and overall victory at the Settimana Coppi e Bartali, as well as second overall at Itzulia Basque Country. This Tour, however, marks altogether uncharted terrain.

Jumbo-Visma’s strategy on this race was designed around guiding Roglič to overall victory, but they have lost the Slovenian to injury, while Tony Martin and Robert Gesink were also forced out by crashes. In their absence, Wout van Aert had the freedom to solo to victory over the double ascent of the Ventoux on Wednesday, but the Belgian champion will surely be pressed into Vingegaard’s service when the race reaches the Pyrenees this weekend.

Vingegaard’s defiant attack atop the Ventoux seemed to breathe a little life into a race that had been seemingly divested of all suspense by Pogačar’s back-to-back exhibitions in the Alps. It remains to be seen if the defending champion’s struggles on the Ventoux amounted simply to a moment of weakness, but one imagines Vingegaard will be minded to ask further questions when the road climbs again.

“I don’t know, it depends on how my legs are feeling,” Vingegaard said. “If I feel good, maybe I’ll do an attack, but otherwise I just want to follow and do my best.”