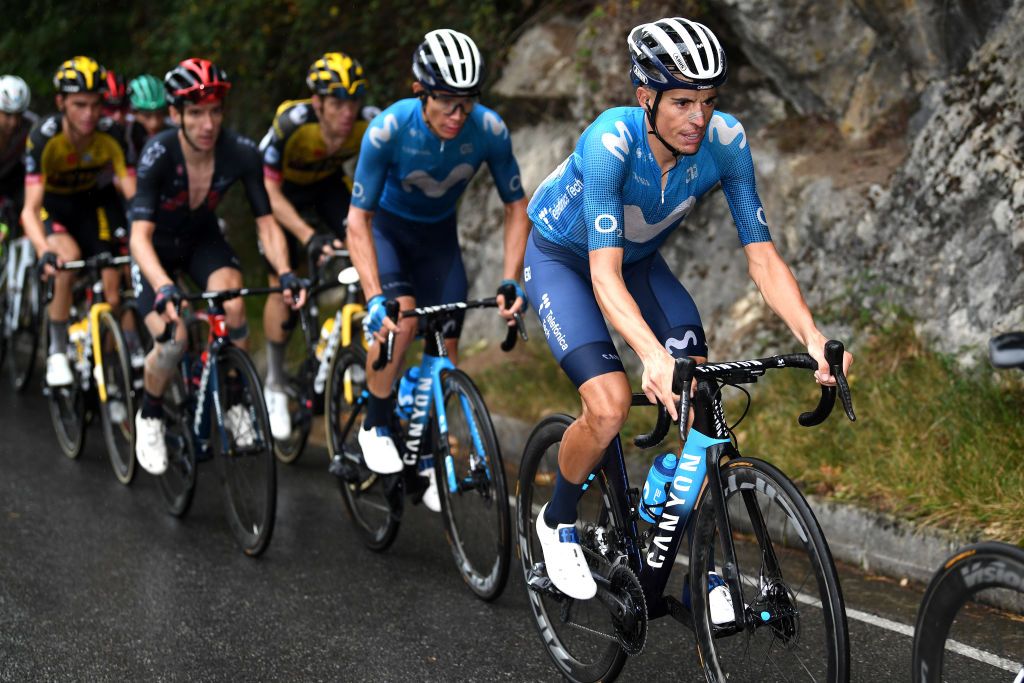 Like all the other GC favourites at the Vuelta a España, Miguel Ángel López and Enric Mas (Movistar) had to bow to the inevitable and accept that Primož Roglič (Jumbo-Visma) was the strongest on Wednesday’s stage 17 to Lagos de Covadonga.

However, the Movistar duo have moved back up to second and third overall on the Vuelta’s provisional podium, and thus remain in pole position to finish closest to the Slovenian on the final podium in Santiago. Or, indeed, to try and dislodge Roglič from power before then.

Both riders tried late attacks on the Lagos de Covadonga climb. However, a collective earlier failure to pull back a long-distance attack by Roglič and Egan Bernal (Ineos Grenadiers) by the chase group containing the Movistar duo and all the other favourites left them trailing behind, and at a considerable disadvantage when trying to limit the damage.

López was third on the stage, and sixth place for Mas, both at 1:35 on stage winner Roglič. The Movistar duo are now trailing Roglič in the overall with Mas at 2:22 back and Lopez at 3:11. In other words, their chances of overall victory have shrunk considerably, particularly with the final time trial in Santiago still Roglič’s trump card.

Yet Mas appeared satisfied with his team’s performance, saying afterwards that despite the setbacks, the two had “saved a very, very complicated day”.

“It was a very demanding stage and there wasn’t ever really a breakaway,” he pointed out. “We had three riders in an early move but that ended up being brought back and after that Jumbo-Visma flattened any attempt at a breakaway.”

The one breakaway that Jumbo-Visma did not suffocate, of course, was the one by Bernal, with López attempting to imitate Roglič and trying to get across.

However, López then opted to sit up because, he said, he thought whoever tried to go with the Slovenian would end up regretting it.

“I wasn’t surprised by his attack nor by Roglič’s pace,” Lopez said. “He’s a rider with a lot of class. I tried to go with Bernal, but I couldn’t get across, I thought it was too far and not worth continuing to try, because as we saw, Egan paid a high price for that.

“If you aren’t sure of what you can do, knowing you’ve got another 40 kilometres to go flat out, it’s a risk, particularly with the stage we’ve got tomorrow [Thursday].”

Mas, on the other hand, said he had no idea that Roglič would try to make such a long-distance move, but that under the circumstances, the Slovenian’s rivals could do little but recognise his superiority.

“He’s shown he’s been really, really strong and we can only acknowledge that and congratulate him,” Mas said. “Quite apart from the time that Primož has managed to gain on us, though, although we can’t get excited about our result, we can be happy with it, more or less.

“We’re still up there, with all the rest of the favourites, and we’re second and third again.”

However, after Roglič’s performance on Wednesday it would seem that rather than try for overall victory, a new chapter of the race has begun, and it could be the most realistic option for the two would be to fight to defend the podium.