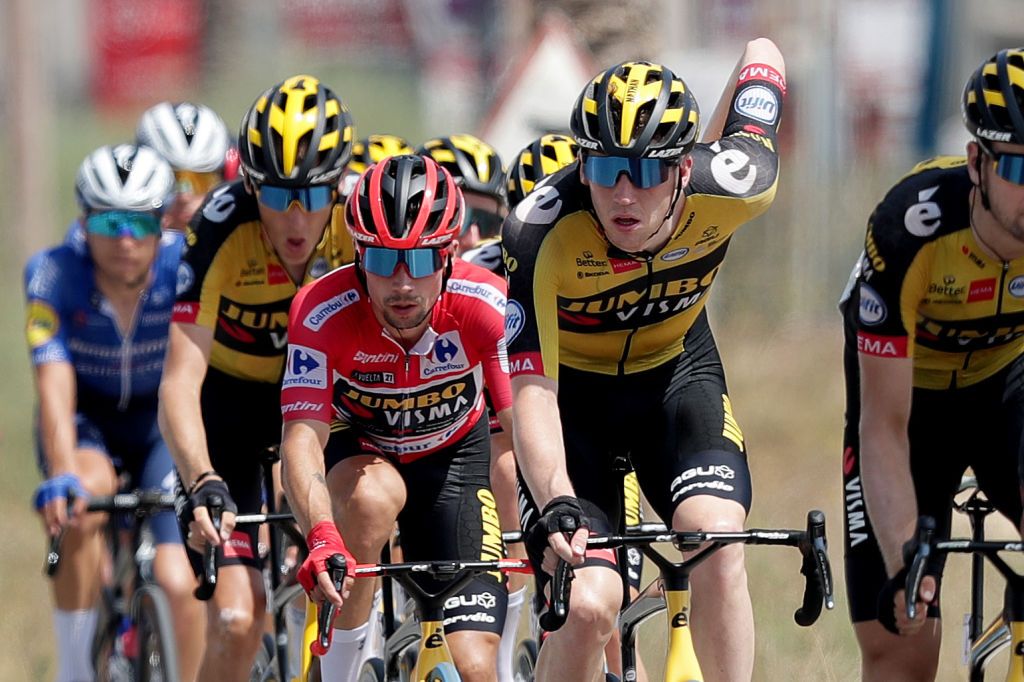 The resort of La Manga is posted on an exposed sandbar on the lagoon of Mar Menor, with only clusters of high-rise apartment blocks to provide some shelter from the elements. A stage finale here was always something to be endured rather than enjoyed for the general classification contenders at the Vuelta a España.

The same thought was wrapped in a slightly more upbeat packaging by red jersey Primož Roglič (Jumbo-Visma): “It was a nice day and I stayed out of the troubles.”

Although the run-in to stage 8 was every bit as tense as anticipated, Roglič and Bernal both finished safely in the peloton as Fabio Jakobsen (Deceuninck-QuickStep) sprinted to his second victory of this race. There may well be a greater degree of separation between the two favourites on Sunday afternoon, when the peloton tackles the toughest stage of the Vuelta to date to Alto de Velefique.

Before that rendezvous, Roglič remains eight seconds ahead of Felix Grosßscharnter (Bora-Hansgrohe), with the Movistar duo of Enric Mas and Miguel Angel Lopez at 25 and 36 seconds, respectively. Bernal, the man who set out from Burgos as the chief pretender to Roglič’s crown, remains sixth overall, 41 seconds off the maillot rojo.

Bernal admitted that he would be content simply to maintain the status quo in the province of Almerìa on Sunday, suggesting once more that his strategy is based on resisting Roglič early on in the hope that he can outlast him in the arduous final week. For Bernal, who insists he is still shy of his best, the Alto de Velefique has the feel of a pivotal test.

“It depends on how the legs are, we will see how we go tomorrow,” said Bernal. “I would be pleased with not losing time in the overall.”

Roglič, for his part, has been accruing an early advantage through the opening week in his habitual manner. After winning the opening time trial in Burgos, he gained seconds and bonuses on his rivals at La Cullera, and his qualities as a finisseur present him with the ability to gain ground even on days of relative stalemate between the general classification contenders.

“For sure, the difference is never big enough, but the most important thing is the difference at the end of the race,” said Roglič on Saturday. “But definitely tomorrow, we’ll try to do our best with the guys around me.”

The stiff final climb of Velefique (13.2km at 6.4 per cent) is, in itself, demanding enough to provoke time gaps among Roglič, Bernal et al, but the day features some 4,500 metres of total climbing that might incite an early selection.

This Vuelta peloton has already proved too unruly on occasion for any one team to control, after all, with some 29 riders escaping in the break of the day on stage 7. On Sunday, the race could be scattered to the four winds by the top of the opening climb, the ominously named Alto de Cuatro Vientos.

“Yesterday, it started already on the first climb, so we have to be ready and focused,” Roglič said. “We have to be there and just do our best.”

On the road to Balcón de Alicante on Friday, Roglič placed his teammate Sepp Kuss in that unwieldy early break, and the American climbed to eighth overall at 59 seconds as a result. Kuss’ presence in the upper reaches of the standings provides Roglič with a most useful foil, particularly given the collective strength of his most obvious rivals.

Despite losing Alejandro Valverde to a crash on Friday, Movistar have both Mas and Lopez within striking distance of red. Bernal, meanwhile, has teammate Adam Yates in 10th at 1:22, though the third prong of the Ineos triumvirate, Richard Carapaz, has slipped back to 16th at 2:48.

“We aren’t scared of anybody, eh?” Roglič deadpanned when asked if he was more concerned by the challenge posed by Movistar or Ineos. “But for sure, the most comfortable guy will be the strongest, and hopefully that will be us.”

At this juncture, it is unclear if Roglič’s supporting cast at Jumbo-Visma is as strong as it was during his Vuelta triumphs of 2019 and 2020, though Robert Gesink delivered a fine and lengthy cameo on his behalf at a fraught moment on the road to Balcón de Alicante.  “We will find out tomorrow and in the next days, but I definitely believe in my guys,” Roglič said.

Then again, in victory and in defeat, Roglič’s default setting is one of quiet fatalism. Asked how he would like the overall standings to look when the race breaks for its first rest day on Monday, he shrugged. “Whatever the situation will be, I have to go with it,” he said. “But it’s true tomorrow is a big day in the mountains.”