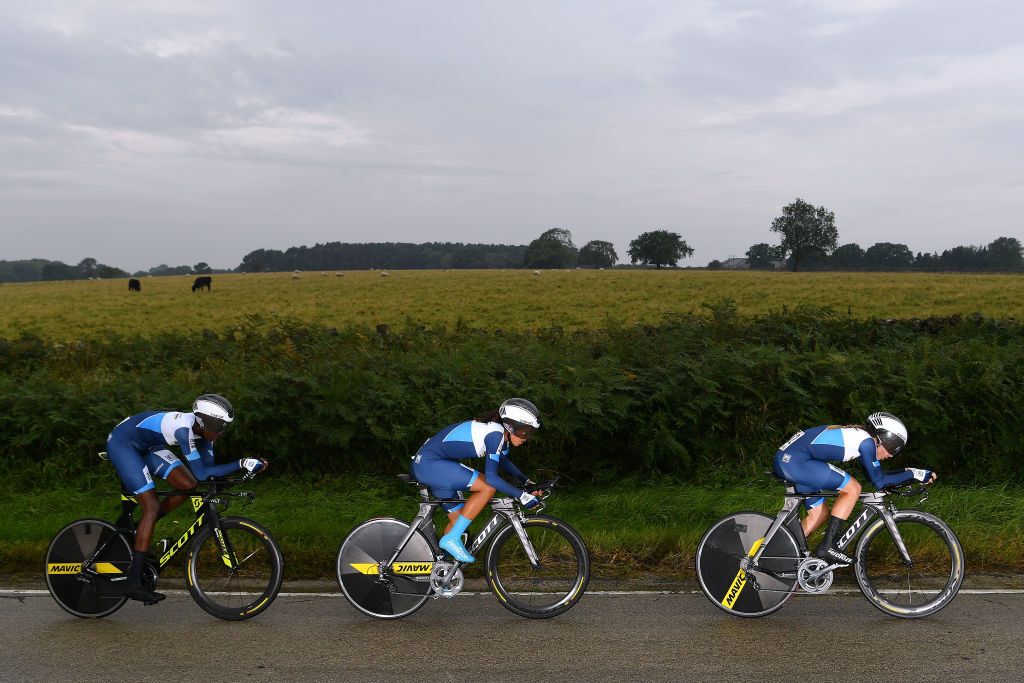 This year, the programme welcomes 50 men and women selected through a talent identification process, and the athletes unite at the headquarters in Aigle, Switzerland, where they are provided with a world-class training facility, coaching, equipment, and racing opportunities.

In an upcoming Q&A feature series, Cycling News will introduce the some of the newest members of the programme as they develop in their respective disciplines and pursue their Olympic dreams.

Vincent Jacquet, the International Relations, Development and WCC Director, told Cycling News that the programme is mainly financed by Olympic funding dedicated to developing International Federations’ disciplines. The sport governing body receives this funding and then reinvests it in the training, coaching and development activities of cycling’s Olympic disciplines. A part of the budget is also dedicated to financing the costs of preparing the athletes.

He added that funding also comes from the International Olympic Committee’s Olympic Solidarity programme, dedicated to athletes preparing for the Olympic Games. National Federations that send through their young talents also make a financial contribution.

How does an athlete get into the WCC programme?

The talent identification process is carried out in collaboration with the five Continental Confederations. Athletes are spotted by their National Federations for cycling, especially in developing nations, if they have high-level training aptitude. The WCC then offers part and full scholarships, including a full range of equipment, lodging, meals, coaching and an opportunity to compete in top-level races.

“The reason the programme was created was to develop cycling worldwide by helping talented riders from countries that did not have the necessary resources or expertise to enable them to realise their full potential,” said Jacquet.

“The UCI’s affiliated National Federations and five Continental Confederations have a big part play in this [talent identification] process. They can detect talent in their regions and let the UCI WCC know of any athletes that could benefit from its programme. Our own coaches also detect talent at different races around the world.

“Each year, we invite these athletes to take part in a ‘talent identification’ camp at the centre where the coaches can see how they cope both mentally and physically with an intensive training programme. We also look to see how they interact with other athletes and perform in various physiological tests.

“This detection and training strategy is one of the cornerstones of the UCI WCC’s new project. The aim is to detect, educate, and train athletes as far as possible in their own country, thus developing our National Federations’ and Continental Confederations’ ability and independence to carry out this first step.

“Today, this strategy is more comprehensive and includes support for National Federations to build their own programmes for the development of cycling and to train different players such as coaches, mechanics and commissaries, because, without them, cycling cannot develop. Only once this work has been carried out do the real talents join the UCI WCC.”

Athletes who have been supported through the WCC programme earlier in their careers include Trinidad and Tobago’s Teniel Campbell, who now races for Team BikeExchange, Cuba’s Arlenis Sierra, who races for A.R. Monex, and Eritrea’s Daniel Teklehaimanot, who raced for teams Cofidis and Dimension Data. In other disciplines, BMX specialist from Venezuela’s Stefany Hernandez, who won the world title in 2015 and bronze medallist at the Rio 2016 Olympic Games, and track cycling specialist from China, Guo Shuang, who won four medals across the Beijing 2008 and London 2012 Olympic Games and the world title in the Keirin in 2009, have also come through the programme.

“It was the best place for me to develop as a rider, and I would recommend it especially to the smaller federations [that] don’t have big budgets compared to the other countries. It was two of the most crucial years in my development because I wasn’t pressured. I had the chance to make mistakes and learn from my teammates and continue growing as a rider. They provided everything. All I had to do was wake up, eat, train, sleep, repeat,” Campbell said.

The WCC initially formed a club team but upgraded to a Continental women’s team licence in 2019 and is mostly used as a launching pad into the professional ranks. Near the end of her first year in the programme, Campbell was offered a contract as a trainee to race for Cogeas-Mettler Pro Cycling. She then spent one more year at the centre and experienced one of the best seasons of her career in 2019.

Marlen Reusser from Switzerland has had a similar experience. After she entered the sport later in life, she found an opportunity to develop at the WCC programme before securing a contract with Equipe Paule Ka in 2020 and Ale BTC Ljubljana in 2021.

“The programme is perfect for athletes that don’t have many opportunities,” Reusser said.

“When I started racing, I was not a young athlete and had no history behind me. At the programme, I had the opportunity to get to know cycling, how things worked, develop as a rider with coaches, training facilities and camps, and the complete programme of what a cyclist might need. It was the perfect entry point for the sport. It’s the same for athletes worldwide, especially for those who come from countries where they don’t get that support.”

Cycling News will introduce some of the the newest and existing members of the WCC programme from Road, Track, BMX and MTB.

About the UCI’s World Cycling Centre

Home to the headquarters of the Union Cycliste Internationale (UCI), the UCI World Cycling Centre (WCC) is an elite coaching and training centre in Aigle, Switzerland. Opened in 2002, the UCI WCC welcomes more than 150 young men and women every year in cycling’s Olympic disciplines of road, track cycling, BMX Racing, BMX Freestyle and mountain bike.

These athletes arrive at the UCI WCC after a thorough talent identification process carried out in collaboration with the UCI’s five Continental Confederations. Since 2004, UCI WCC trainees have won 23 Olympic medals: three gold, 10 silver and 10 bronze either during or after their time in Aigle. Added to this are more than 70 UCI World Championship podiums including 41 titles of UCI World Champion across the different disciplines and categories.

SOURCE: CyclingNews   (go to source)
AUTHOR: kirsten.frattini@futurenet.com
All copyrights for this article, including images, are reserved to the original source and/or creator(s).